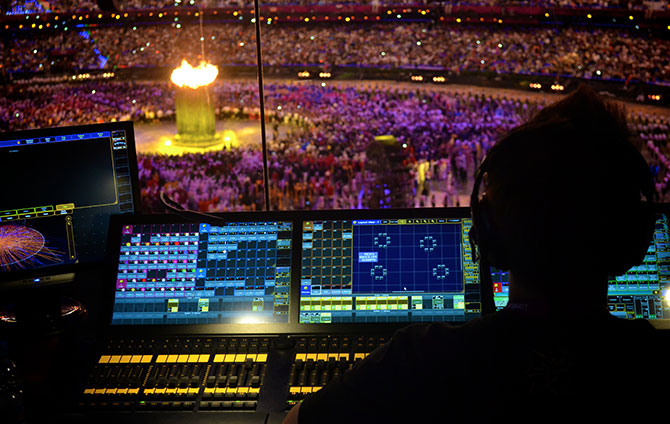 We’re still basking in the Olympic glow here at RWCMD so we caught up with alumni Tim Routledge, the Lead Lighting Programmer on those legendary opening and closing ceremonies. In between sorting out the lighting for Gary Barlow at the Edinburgh Playhouse, he told us what it was like to be involved in one of the biggest lighting sets in UK history.

It’s been a busy summer, what are you up to at the moment?

I’m at the Edinburgh Playhouse on tour with Gary Barlow at the moment and last week I was in Dubai doing a show with the Stereophonics. I’m taking a break this weekend to work on the War of the Worlds tour and then I’ll go on to work with Kathryn Jenkins designing her new tour which starts in December. I’ve worked with her for about five years.

The Olympics isn’t the only huge national event you’ve been involved in this year, is it?

No, I went straight from working on the Queen’s Jubilee event, so I started working properly on the Olympics on June 6th.

(Tim was Associate Lighting Designer for the Queen’s Diamond Jubilee Concert at Buckingham Palace, and is currently up for a Royal Television Society Craft Award.)

So, the Olympics. When did you know you were going to be working on it?

I’d worked on the opening and closing ceremonies of the Beijing Olympic Games and really wanted to be involved when it came here so I was really pleased when the designer, Patrick Woodroffe asked me to do it last July. It was the biggest lighting rig ever used in the UK so I had to put together a team including Pryderi Baskerville (RWCMD alumni), who was one of my lighting programmers. We spent a year working on it and doing tests in the stadium overnight because it all had to be top secret.

The opening ceremony blew everyone away. Did you know when you were working on it that it was going to be such a phenomenal success?

Well, I knew about the Queen jumping out of the plane with Bond for about six months beforehand, so I had an idea it was going to be inspired. But when you’re sat in the stadium rehearsing and it’s raining day after day after day, looking out at lots of plastic ponchos, it’s hard to envisage how it’s all going to come together with any impact. It wasn’t until the dress rehearsal the week before when we had an audience for the first time and we saw their reaction – then we knew we were really onto something. I think it was when the rings went up that everyone was hooked. We knew they were ours from then on!

Other RWCMD alumni who worked on the Olympic ceremonies included: