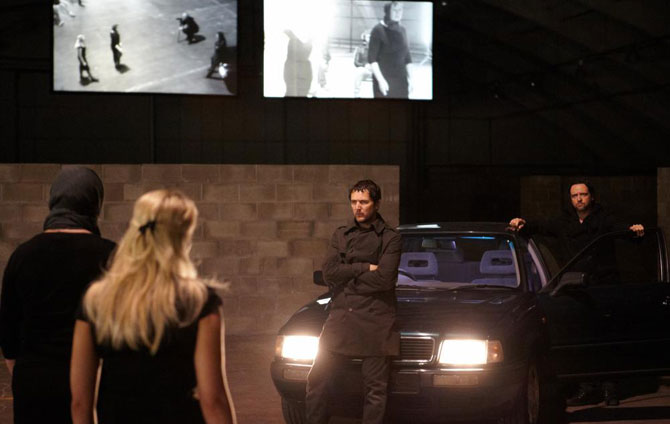 Two young composers from the College accompanied Head of Contemporary Music John Hardy as he picked up the Theatre Critics of Wales Award for Best Music and Sound for his work on The National Theatre of Wales’ Coriolan/us in 2012.

Benjamin Talbott and Victoria Ashfield worked closely with John on this professional engagement, assisting in the technical and pre-production elements as well as with the composition.

Based on Shakespeare’s Coriolanus and the 1950s Brechtian re-working of the play, the production was performed in an aircraft hangar in St Athan as part of the 2012 World Shakespeare Festival.

Benjamin told us about his experience on the set, “I basically badgered John for a year to be involved, because I have a real love of Shakespeare. Working on a higher-level production meant that I could really focus on my specific area of work and concentrate on learning as much as I could in a professional, high-pressure environment.”

Working in a large, resonant space, the production understandably threw up some technical challenges. The award was presented not only for the composition of the score, but for the realisation of sound within a demanding and avant-garde setting.

“We weren’t 100% sure of all the technicalities until maybe a week before the show opened, so we had to be really careful about the way we wrote. We created music as a whole soundscape for the performance rather than solely an incidental score,” said Benjamin.

The experience allowed Benjamin and Victoria to be directly involved with a professional and award-winning production as well as contributing to their academic studies as a work-placement.

“It was an amazing; it really filled a void of confidence for me. Working with John on such a high-profile, complex production was an invaluable experience– and it’s such a surprise to win an award for our work!”

The students accompanied John Hardy to the awards ceremony and received the award alongside him.