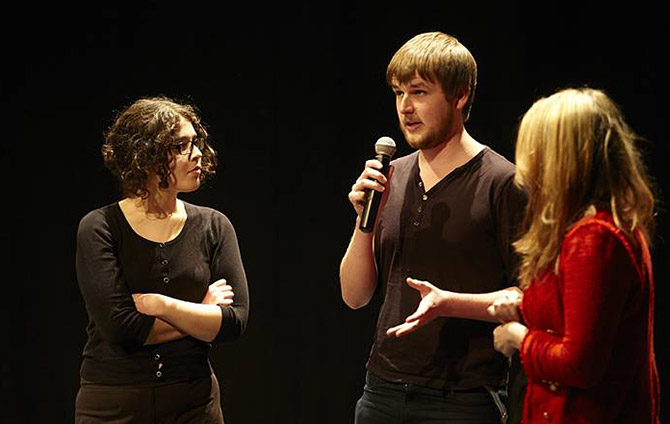 Emerging from a rehearsal of his own work with Music Theatre Wales and Sir Harrison Birtwistle, undergraduate composer Ben Lunn told us about the journey that has led him to have his work performed for the first time this evening by the UK’s leading contemporary opera company.

What does the Make an Aria project involve?
“Myself and four other student composers from RWCMD have composed operatic arias, which will be performed in a public masterclass with Music Theatre Wales at the College this evening. Sir Harrison Birtwistle is here to lead the masterclass, which is incredible. Late last year, we were teamed up with a writer and a designer and given a brief to create an aria from an imagined opera. I’ve been working with Maeve Scullion from Sherman Cymru’s Young Writer’s Scheme and Amy Hudson, who is studying theatre design here.”

How was the rehearsal?
“I was really pleased with the performance and Sir Harrison didn’t tear me to shreds, which I’m looking at as a positive!  He said some very profound things and I have a feeling his words will be rattling round in my head for a long time yet. I haven’t really had chance to process the feedback yet – my head feels like it might explode. I’m really looking forward to the public performance tonight, and to finally hearing the others’ work.”

How have you found the collaborative process?
“Working with a writer means that you are not constrained by an existing libretto or worrying about whether you are being faithful to the writer’s intentions. Maeve’s piece is written for a girl of our own age who is reminiscing about a night out in Cardiff when she picked up a lad in the Live Lounge. In her otherwise disappointing life, the event has taken on a huge significance. I’ve been trying to capture the melancholy and the magical excitement associated with this distant memory.”

When did you become interested in opera?
“Before I came to the RWCMD three years ago I had never imagined that I would learn to love opera. I had never even heard a full opera.  It was mainly through the work of other students at the College that I became interested.  Seeing performances of new works by Tom Floyd and Luke Bedford really captured my imagination and set the benchmark for what I wanted to achieve. Being in Cardiff has provided great opportunities to see professional opera performances. I particularly enjoyed Music Theatre Wales’ 2011 production of Greek, and Welsh National Opera’s Lulu earlier this year. I’m looking forward to WNO doing Wagner Dream by Jonathan Harvey, one of my favourite composers, in June. And Music Theatre Wales are performing Sir Peter Maxwell Davies’s Eight Songs for a Mad King right here at RWCMD at the end of this month. I’ve really been able to immerse myself in this creative environment and it’s been a huge benefit to my work.”