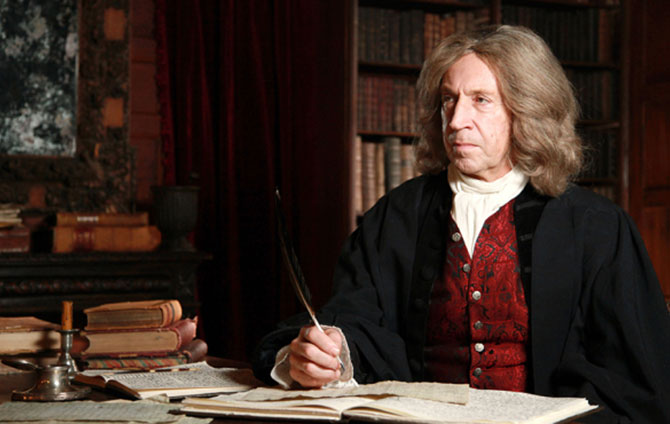 As part of BBC2’s Genius of Invention season, contemporary music students Benjamin Talbott and Victoria Ashfield have been busily recording and producing the score for next Friday’s episode: Isaac Newton: The Last Magician, working closely with Head of Contemporary Music John Hardy. Benjamin and Victoria were able to assist Odilon Marcenaro, the RWCMD recording studio manager, in recording some of the UK’s most distinguished Baroque specialists in the College’s Dora Stoutzker Hall.

John Hardy created a score using specialist musicians playing instruments of Newton’s era, and which he would have recognised.

Benjamin and Victoria captured the performance of Baroque violinists Dr Simon Jones and Andrea Jones, and Theobo player David Miller, playing arrangements by John Hardy of works by Corelli and Purcell. They also recorded some completely original material which they hoped would illustrate and underscore aspects of Newton’s life and thought.

“Working on the programme enabled me to use a broad range of musical skills, while working on an exciting professional project,” said Victoria. “It was a unique and positive experience, as we worked together towards a common aim. Huge thanks to John for providing me with such a valuable experience.”

Ben added, “I was involved in the construction of many of the music cues for Isaac Newton in the role of co-composer and engineer. Putting everything into practice was a big learning curve; building on all my previous composition experience; turning pieces around quickly; considering the end quality, with high expectations of ourselves and producing music at speed, for a broadcast of international standard.  Frantic at times!”

In the final stages there was a flurry of requests for pieces to be composed, adjusted and sometimes remade altogether. Benjamin and Victoria and their hard graft, enthusiasm, work ethic and moral support were crucial in achieving the resulting soundtrack, which we all feel very proud of.
John Hardy, Head of Composition and Contemporary Music