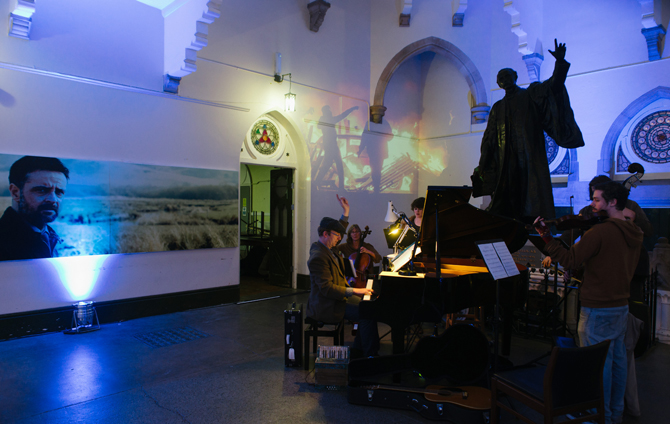 It’s been hailed as the next The Killing, and the new detective drama series Y Gwyll/Hinterland hits our screens tonight.

The College’s Head of Composition, John Hardy, was commissioned to compose the soundtrack for the series, and he worked alongside recent graduates Benjamin Talbott and Victoria Ashfield to create the final score.

At the world premiere of the Welsh Language version in Aberystwyth (where the series is set and filmed), the trio played a live arrangement of the atmospheric score, along with a band made up of musicians from the college.

Earlier this year, while the show was in production, composition students took part in workshops with the show’s producers and director. The students were given the opportunity to work to specific briefs to create their own genre-based compositions for the series, which were discussed, deconstructed and analysed in a series of interactive presentations and workshops. 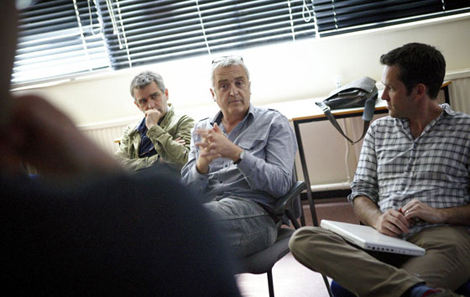 The producers of Y Gwyll/Hinterland at a workshop with composition students.

John Hardy said: “This was a great chance for our emerging composers to experiment with their ideas, to learn about the process of composition for specific projects whilst getting genuine, hands-on experience with a professional production. It was also a chance for them to introduce themselves and their work to producers and to develop with the help of suggestions made by some of the biggest names in the business.”

The Welsh Language version of Y Gwyll/Hinterland is on S4C tonight. The English language version will be shown on BBC Cymru Wales and BBC Four in 2014. The series has already been snapped up by Danish broadcasters DR Denmark, who first broadcast The Killing and Borgen.