As we prepare to open our latest shows next week, acting and musical theatre students are busy with final rehearsals.

As part of their training, they work as a professional rep company (the Richard Burton Company) in their final year, putting on productions directed by industry professionals.

Two of the visiting directors this season are Bruce Guthrie (directing Rent – rehearsals pictured above) and George Perrin (directing Twelfth Night). Here’s a bit about the directors and what you can expect from their productions. 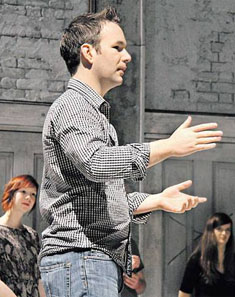 Bruce Guthrie trained as a director at the National Theatre Studio. While he was staff director at the National, he worked with directors such as Howard Davies, Sir Richard Eyre and Deborah Warner. He also directed two time Golden Globe Winner John Lithgow in the sold out premier of his one man show Stories by Heart in the Lyttelton.

Recent credits include critically acclaimed open air productions of Twelfth Night (2012) and Othello (2013) for the Singapore Repertory Theater, and Kieran Lynn’s comedy An Incident at the Border at the Finborough Theatre and Trafalgar Studios, for which Bruce was nominated as Best Director by broadwayworld.com.

Bruce recently returned from New York where he has been filming his first feature film The Man on Her Mind by Alan Hruska, following his production of the play of the same name at the Charing Cross Theatre.

Here at RWCMD, Bruce is directing Rent, the musical based on Puccini’s opera La Boheme about a group of unconventional artists and musicians living in New York’s East Village in the 1980s.

“With this production we’ve gone back to its roots in La Bohème. It’s a very operatic play, with punch, and an irreverence that isn’t seedy or dirty, but allows the characters to fully express themselves and to dispel taboos. Rent is an imperfect masterpiece – but it is absolutely a masterpiece.” 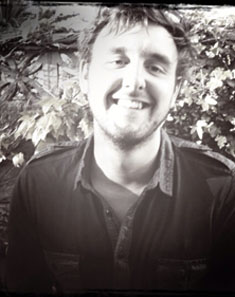 For the College, George is directing Twelfth Night, Shakespeare’s classic Christmas tale of mistaken identity, unrequited love, and cross-dressing, calling on pop music  and audience participation to reach out to modern audiences in this very contemporary interpretation.

George says: “We’re aiming this primarily at people who don’t normally come to Shakespeare – or to the theatre. We want to bring out the comedy, and the anarchy, with plenty of audience participation – you can even get up and dance on the stage at the beginning of the play. Although we’re also highlighting the darker side of the play, which tends to get overlooked.” 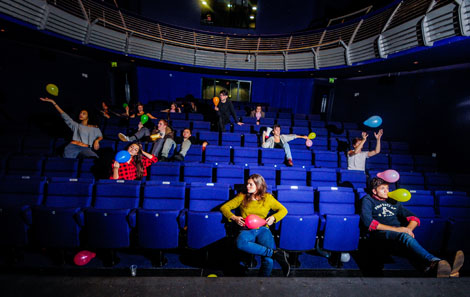 The cast of Twelfth Night, directed by George Perrin