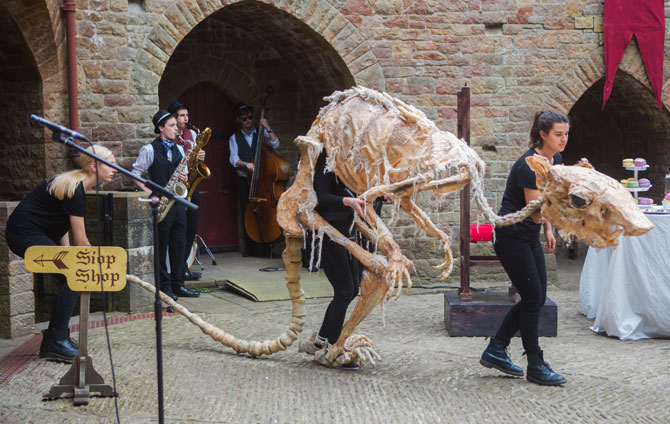 We just can’t wait for this year’s puppetry production, The Desert Daydreamer – which will take designers, stage managers, actors and musicians to the leafy surroundings of Dyffryn Gardens for an interactive performance.

In the meantime, we caught up with third-year designer Olivia Racionzer, who worked on last year’s puppetry, Shelley and the Ratman.

She talks us through the process; from initial concepts and designs to production and performance. Watch a video of the performance here (and don’t miss this year’s show!).

The puppetry project in the summer term is 12 weeks long, during which we research, test, maquette, make, rehearse and perform.

The giant rat took more or less 5 weeks, and alongside this my team had to make:

What materials did you use for the giant rat? 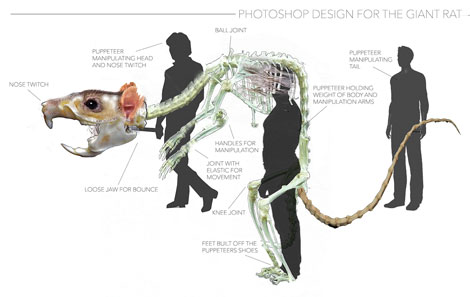 The rat is made of quite a few materials: an old backpack frame for the central puppeteer to wear, a pipe for the internal structure, insulation tubes, plastazote, latex, tight-like fabric, dust sheets and baubles for the eyes. 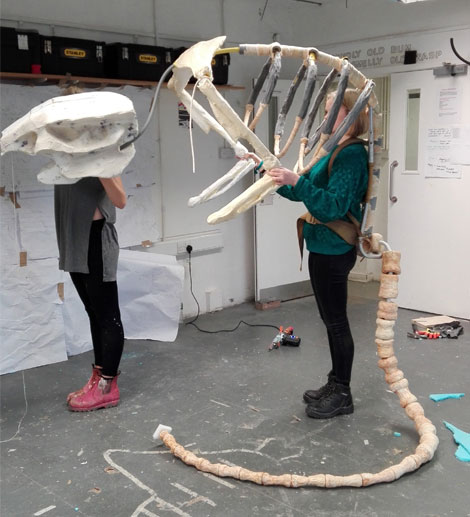 Where did you get your inspiration for this project?

For this kind of project you need to work as a team to come up with designs, and then make sure all the puppets fit together will all the other teams, in order to form a coherent show.

In the script the giant rat was described as old and scary, the ‘Uncle’ of all the other rats. So we decided to look into mummified rats and took them as our inspiration – with the tufts of hair, stretched skin and bones showing. 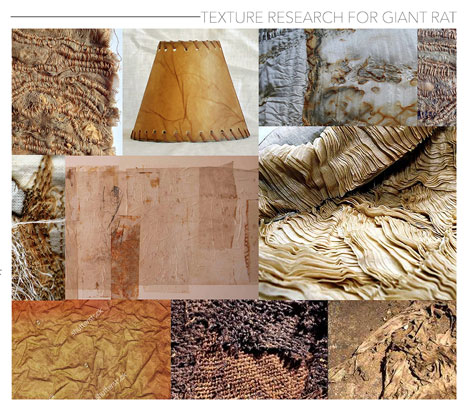 Tell us a bit about your experience of performing with the puppet.

Performing has never been my strong suit, but puppeteering is slightly different – you’re able to concentrate on this one object that you’re bringing to life and it’s no longer you that is the centre of attention but this other character.

In order to bring the inanimate object to life we had advice from people such as Dik Downey from Pickled Image, Emma Williams, the director and a workshop at the very beginning with Rene Baker, a theatre maker.

They helped us find the breath in the puppet and showed how to bring it to life, making the audience believe in it.

What was hard with this puppet in particular was that you not only had to bring this giant rat alive, but you also had to coordinate with two other people. 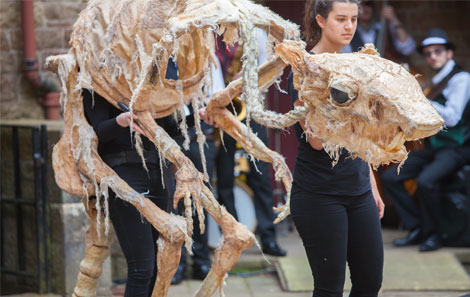 I was leading with the head, Ceci Calf was strapped in the rucksack inside the body and Hannah Page was following with the tail. If even just one of us was a little bit out, the puppet died and wouldn’t have had the same effect.

The challenge with this project was making sure everything came together at the end of it; the puppets not only need to look good, but also function. We had a few rainy days last year, and it does make an impact on the puppets. You end up not only performing, but also having to fix things in between shows!

Looking back on it, it’s amazing what we manage to make each year – not only the quantity but also the quality. Teamwork plays a huge part it in, and being able to enjoy working with the people around you makes a huge difference. I’m proud of what my team managed to pull off, and cant wait to see the show this year! 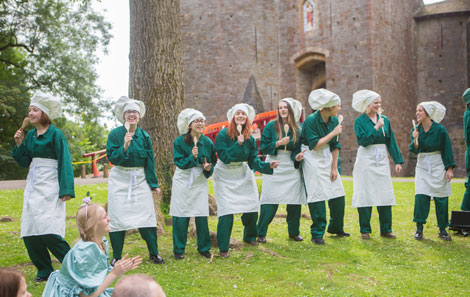 Designers performing in the production

Video: Shelley and the Ratman Puppetry at Castell Coch