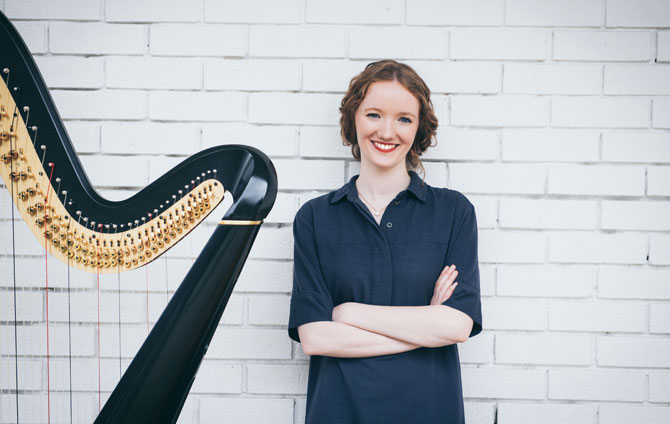 Alis Huws has plenty to celebrate this week. Not only is she graduating from the College with a Masters Degree on Friday, but she’s just been announced as the Official Royal Harpist.

The Prince revived the tradition of having an Official Harpist in order to foster Welsh talent on the harp, the national instrument of Wales. pic.twitter.com/e8IV9n4sUQ

Alis, who joined the College as an undergraduate in 2013,  continues a long tradition of royal harpists with links to the College: Fellow, graduate and artistic director of World Harp Congress 2020, Catrin Finch was the first harpist to hold the re-established tradition. 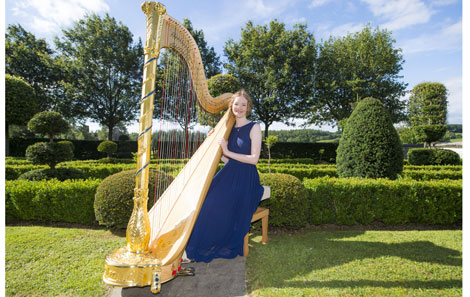 Alis with the royal harp, in the gardens of Llwynywermod 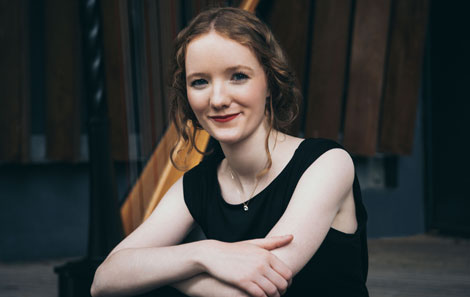 The announcement was made yesterday at Llwynywermod, the Prince of Wales’ West Wales home, during his annual evening of entertainment, provided by the College’s music and drama students.

“I’ve had a fantastic time studying at the College,” said Alis. “I’ve been very fortunate to have had some truly amazing opportunities during my time here.

I’m especially grateful to Caryl Thomas, Head of Harp for being my primary teacher throughout my degree, as well as all the other staff members of the Harp Department, who have been consistently helpful and encouraging.

I’ve loved being part of such a friendly, supportive department where we not only work hard but also have lots of fun, something I feel reflects RWCMD’s family feeling.”

Alis is used to playing for Royalty, having already performed for the Royal family several times.

Her many high-profile performances also include playing regularly at events for the Welsh Assembly Government, performing across Europe and the Far East, and joining Katherine Jenkins and Only Men Aloud to celebrate the UEFA League Final in Cardiff. 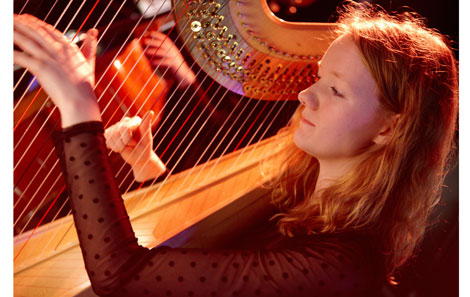 Alis performing at the College’s Buckingham Palace Gala in 2016

Alis is the Youth Coordinator for World Harp Congress 2020 which comes to Cardiff next summer, and in 2017 she performed at WHC in Hong Kong.

Earlier this year, she spent a term in Amsterdam, studying at the conservatoire with Erika Waardenburg as part of an Erasmus scheme.

After she leaves College she’s touring with the Britten Shostakovich Festival Orchestra on their inaugural tour of Russia and the UK. 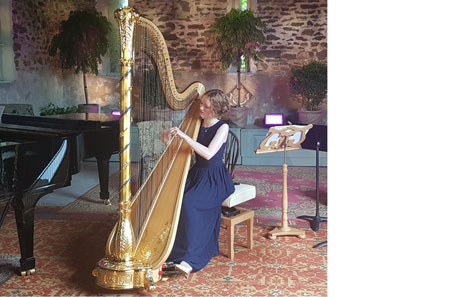 Playing the Royal Harp for the first time at Llwynywermod

Alis regularly gives workshops and recitals in schools and hospitals, as well as interactive concerts for dementia patients, working with the charity Lost Chord and Music in Hospitals & Care.

“I strongly believe in the importance of taking music to your audience rather than the other way around, as it can benefit those who would otherwise not have access to a live concert.

Having worked as part of the front of house team for some time, it’s great to see the College taking steps to be have more inclusive performances. The recent addition of dementia-friendly concerts are something I’m proud to have been a part of.”

Alis said of her appointment: “It’s a great honour and privilege to have been given this unique opportunity. I am passionate about my Welsh heritage and I would hope to use this platform to be an ambassador for our language, music and culture.” pic.twitter.com/nOh9FzOhlE

Alis is very proud of her traditional Welsh roots, growing up as a farmer’s daughter, on a hill farm in rural Powys, as part of a Welsh-speaking family.

So how did she start playing the harp?

“My mother’s harp was sitting in the corner. One day my mother sat the four of us children down and said that one of us would have to play it.

I volunteered, having already played the piano and clarinet.”

By chance, the international harpist Ieuen Jones, a professor at the Royal College of Music, had just moved back home and knew the family, so he taught Alis while she was at school.

Her career as a harpist had begun.

While Alis was at College she was awarded the Midori Matsui Prize for music, the Royal Welch Fusiliers Harp Prize and the McGrenery Chamber Music Prize, and is generously supported by the Tillett Trust, The Biddy Baxter and John Hosier trust, the Arts Council of Wales and the EMI Sound Foundation.