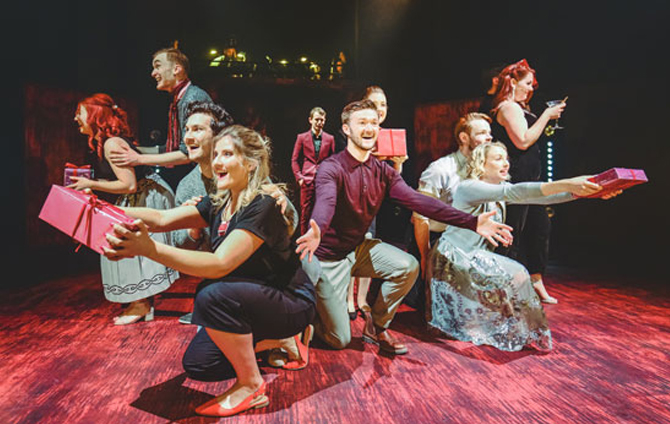 As this year’s MA Musical Theatre students shine up their singing for their first show – a very festive Christmas on Broadway – we catch up with what some of our recent graduates are up to:

Team RWCMD made its mark this year in Les Misérables as three graduates performed in the tour of the West End’s longest-running musical.

It reopens later this month in the newly named Sondheim Theatre.

Luke McCall understudied Jean Valjean on tour and will be the alternate lead role in the new production. It’s just been announced that now he’ll play Valjean every Monday from now on.

He made his debut in Les Mis straight after graduating in 2015, and is the youngest person ever to play the title role in The Phantom of the Opera and  Les Misérables.

This year he also appeared in Man of La Mancha at London Coliseum, followed by the UK and International Tour of Titanic – The Musical. 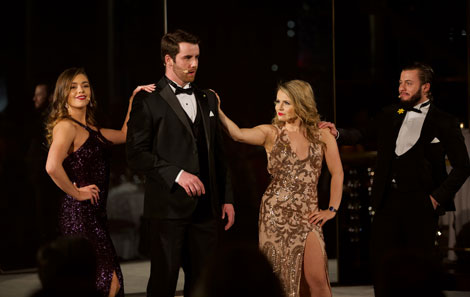 2017 grad Emma Warren, who has been covering the role of Cosette on the recent tour, will also continue to understudy this role.

We are pleased to announce that by royal invitation, joining Gok Wan and Phil Butler in this year’s Panto, Cinderella, are Teleri Hughes as Cinderella and Rob Wilshaw as The Prince.

Michael Robert-Lowe, who played the leading role in Sweeney Todd in the College’s 2017 production, will play Joseph Buquet in next year’s UK and Ireland tour of The Phantom of the Opera.

We’re looking forward to welcoming him back to Wales when the production hits Wales Millennium Centre in December next year.

Another announcement! CONGRATULATIONS to gorgeous graduate @MRobertLowe #MAMT17 @rwcmd who will be joining the cast of the UK & Ireland Tour of The Phantom of The Opera! #proud #Sweeney #swingyourrazorwide #musicaltheatretraining https://t.co/OTfRD0j1wL 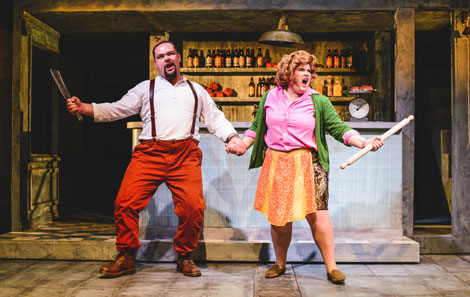 People of Aberystwyth!This wonderful musical from @theatrnanog is @aberystwytharts today and tomorrow and you would be silly to miss it!An inspiring, original and important show performed by a ridiculously talented cast and created by a cracking team.GO SEE IT! https://t.co/KMUnzgNNng

Richard Russell Edwards, who was in our very first cohort of Musical Theatre grads, has a long association with Sasha Regan productions; this year he played Connie in the all-male Pirates of Penzance at Wilton’s Music Hall.

Best wishes to RICHARD RUSSELL EDWARDS (@RichardREdward) and the company of ‘THE PIRATES OF PENZANCE’ @allmalepirates on their closing performance tonight at @WiltonMusicHall https://t.co/ocLafrFdM7 from Regan De Winter Williams https://t.co/XK5deaEtCQ pic.twitter.com/9QL53PLapg

And on a Christmassy note, alongside Teleri’s Cinderella, a number of our grads are starring in pantomime roles across the UK:

And our very own MC, Corey Jones, plays Peter Pan this Christmas at Stafford Gatehouse Theatre. 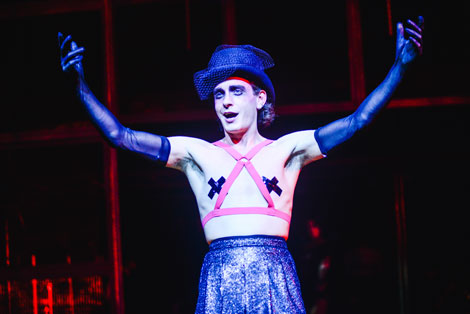 2017 graduate James Rockey is in Alhambra Theatre’s Snow White and the Seven Dwarfs. He’s also played two roles in the BBC’s critically acclaimed His Dark Materials –  which also features 29 RWCMD students and grads from Design for Performance and Stage Management.

Kudos to #MAMT17 grad @Rockey8 for his work with Wales’ newest ambassador @Lin_Manuel on @BadWolf_TV @darkmaterials @BBC! Proud to have many @RWCMD grads on #HisDarkMaterials across art dept, puppetry and locations ⏳🧭💫 pic.twitter.com/lucbhRwcL1

And here’s just some of the highlights from this year’s graduates:

There’s more Phantom of the Opera success, this time in Athens, as Glain Rhys makes her professional debut as the understudy for Christine.

Alex McDonald-Smith joins the Showtime Challenge’s 48-hour production of 1950s classic Singin’ In The Rain at the Adelphi Theatre.

Lauren Bickerdike and Tom Platt (2018) co-star in The Night Before Christmas directed by James Williams, who directed them in the College’s Showcase.

Conor O’Rourke dons uniform in Whistle Down the Wind as the policeman at Union Theatre in London.

We can’t wait to see what this year’s Christmas on Broadway stars get up to!

It has been an utter joy working on #ChristmasOnBroadway with @RoyalWelshMAMTs
Congratulations on a brilliant opening night! #MAMT20 #RWCMD #Choreographer #MusicalTheatre @RWCMD pic.twitter.com/aWf3vlw7jA

I performed in this hall dozens of times as a student at @rwcmd, but today is my first time as a visiting professional.
Thanks to @VivCare for inviting me and the ever talented @RoyalWelshMAMTs for having me – CHRISTMAS ON BROADWAY is a CRACKER! (Geddit? Cracker…?)#Christmas pic.twitter.com/b3wKlapfpL