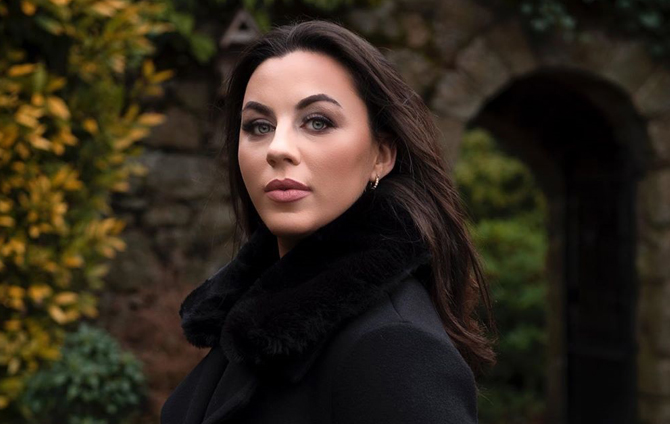 Croeso mawr back to the College soprano and Opera graduate Rachel Goode, who returned to give her Prizewinner’s Recital as the winner of the Sir Ian Stoutzker Prize this month.

Rachel, who graduated with both a distinction from the MA Opera Performance course, and then a distinction for her Postgraduate diploma, won the College’s most prestigious prize last year, just before she graduated.

Back in June I was thrilled to have won the prestigious ‘Ian Stoutzker Prize’ for most outstanding musician @RWCMD what a night! Here’s a little action shot #soprano #irishsoprano #operasinger #rwcmd #wales #cardiff pic.twitter.com/UYk2OI1w6m

In 2018, while still studying at College, Rachel, originally from Galway, made her professional Opera role and company debut in Opera Collective Ireland’s The Return of Ulysses. She made her debut with Irish National Opera in their production of Aida later that same year.

Last summer she made yet another debut, this time with WNO as Sister Catherine in Dead Man Walking, directed by the College’s Hodge International Chair, Martin Constantine, who’d directed her in the College’s production of Albert Herring, among others.

Among her many projects since leaving College, Rachel’s performed in the chorus for Wexford Festival Opera, and was the ugly step sister Maguellone in their production of Viardot’s Cendrillon.

While she was back at the College we chatted with her about winning the Stoutzker Prize, and her life post-RWCMD.

What advice would you give someone thinking of becoming an opera student?

“My advice would be to grab all opportunities with both hands and immerse yourself in every aspect of the course.

Remember that it takes a big commitment and a lot of sacrifice but huge reward at the end.

I came to Cardiff not knowing who I was as a person or a singer, but left knowing exactly who I am and what I have to offer.

For that RWCMD will always hold a special place in my heart.”

What did winning the Sir Ian Stoutzker Prize mean to you?

“Winning the Prize was such a shock, but an amazing achievement for me.

It helped me so much with my career so far, opening doors for lots of work opportunities. It’s such an important prize for musicians, and I am so grateful that I was the recipient last year.”

Tell us about some of your RWCMD highlights

“Wow, I couldn’t pin this down to one thing. I’m really not just saying this but my experience at RWCMD was so amazing, and going there was the best decision I ever made.

Before starting at College I had never even performed in a fully-staged opera role but that changed quickly as I performed in six operatic roles. Each one challenged me in a new way and helped me grow as a singer and performer.”

What a night last night singing the phenomenal music of Suor Angelica under the baton of @CarloRizziMusic with @WNOtweet orchestra🤩 What a way to top off my birthday! I thought I deserved a prosecco 😉🍾 #soprano #irishsoprano #operagala #rwcmd #wno #wales pic.twitter.com/JkQXHlMn00

“Suzanne Murphy was the most devoted and supportive teacher I could have asked for, she helped me develop my voice and to believe in myself and my abilities.

I had a fabulous coach in Michael Pollock whose knowledge and advice was second to none. Martin Constantine, Director of Opera, developed me as an actress where I came out of my shell and Head of Opera Angela Livingstone was so supportive throughout.

I’m very grateful for all the amazing opportunities and roles she brought my way.”

Find out more about our Opera courses here.