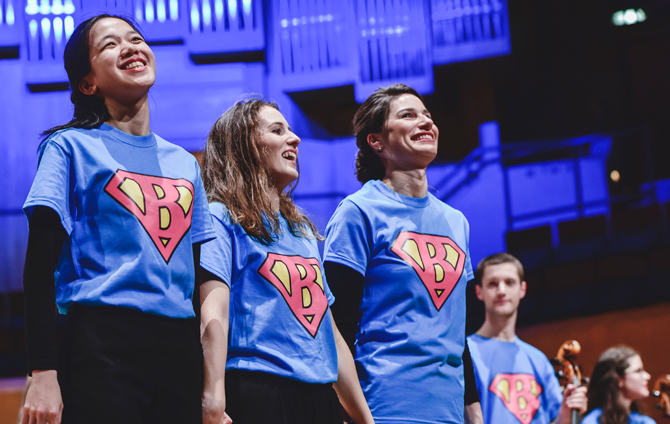 With over 1200 school children sitting in St Davids Hall, waiting to be inspired by classical music, three of our International Orchestral Conducting students were more than up to the task.

Presiding over the whole event was animateur and bassoonist Ruth Rosales.

What an lovely trip the whole school had today to watch Orchestradventure! Beethoven musical superhero . An amazing performance by @RWCMD all the children enjoyed listening to a live orchestra. Lovely experience. @BlaenycwmPS pic.twitter.com/EYBmVaFO6i 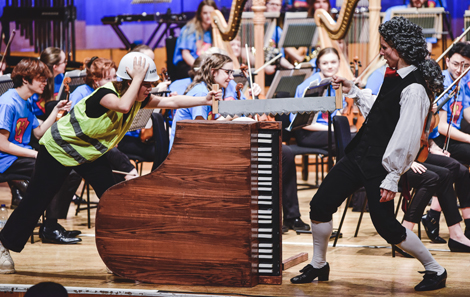 Ruth Rosales (right) sawing off the legs of Beethoven’s piano.

We caught up with Ruth after a full morning working with the symphony orchestra on the interactive script, which included sign language and some acting.

“They’ve all been fantastic so I’m having a great time.”

Ruth was impressed with the conductors’ ability to adapt to her script, which, as she points out, is very different to a traditional Beethoven concert.

“Everyone’s been super flexible because it’s such a varied programme: they’re bouncing from John Williams to Beethoven to something completely modern that they’ve never heard before.” 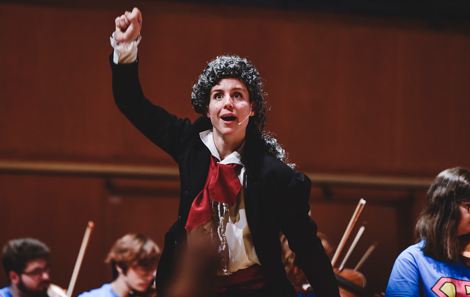 All three of this year’s conductors agreed that they were inspired by the success of recent graduate Tianyi Lu, who conducted previous Orchestradventures!

Kay recalls that it was meeting Tianyi in Manchester a few years ago that made her apply to study here at RWCMD.

“I knew that she was good, and she spoke really highly about her teachers, so that is what got me here”.

With International Women’s Day just around the corner, they are all aware that they are part of a new generation of women leading the way in conducting.

“Because it’s such a male-dominated profession, women tend to be compared a lot more to how men conduct, and often we really have to prove ourselves.

However in college, it’s a hugely positive environment and we’re all treated equally; there’s no judgment whether you’re a woman or not”, Kay explains. 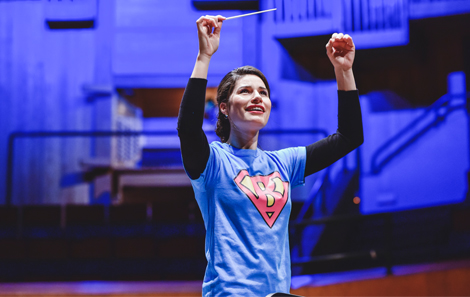 Kay Salomon shares a big smile on the podium.

“I find that the support for women conductors these days is getting better and better”, agreed Constança. “We know that even though everyone can apply to courses and workshops, there are some places that still have a view that women conductors aren’t strong enough. So it’s really nice to have the support that focusses on women to make sure that this stereotype means nothing.” 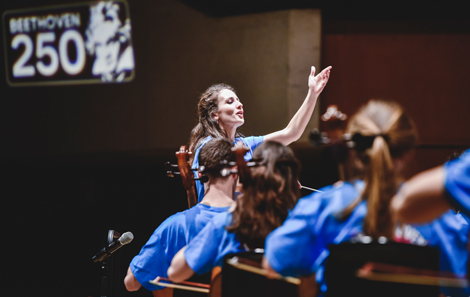 Yi Yun described her entire experience of conducting at the Beethoven 250 concert as “transformative”, and wanted to acknowledge the College’s support, and is full of praise for their mentor David Jones.

“He knows exactly what his students need and works with everyone, no matter what their musical background. He’ll work with different levels of expertise with no discrimination.” 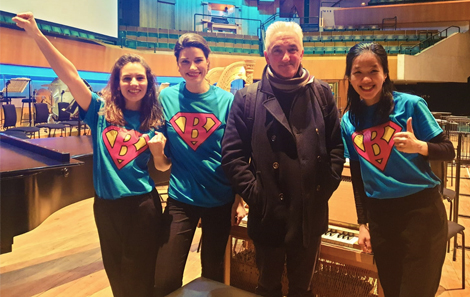 Beethoven’s passion for music and excellence didn’t end when he lost his hearing and as Yi Yun said, children should be encouraged to pursue a love of music despite any barriers they might have.

The Beethoven concert aimed to inspire children of all backgrounds and abilities by focusing on Beethoven’s story and his music.

Many of the children were going to a classical concert for the very first time, and so it was created to be as an accessible and inclusive as possible to give them a real opportunity for them to engage with the music.

The concert also gave all the students the opportunity to practice their skills they’d learned in the classroom and apply them to a professional performance of classic and modern works.