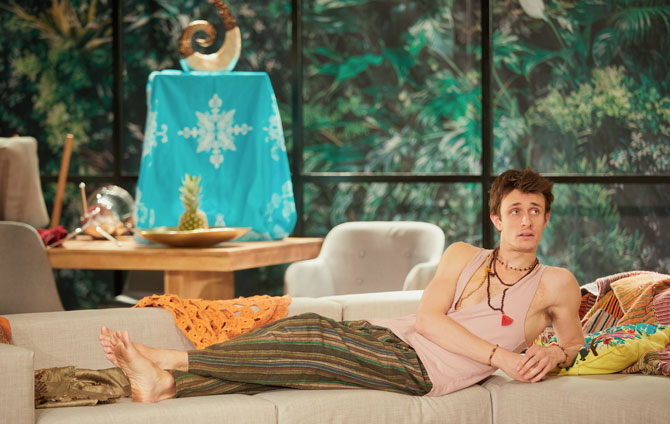 Design for Performance
Production and Design

Every term our in-house Richard Burton Company brings together the College’s actors, stage managers and designers to create the new season of shows.

Each production presents an industry-standard challenge for all our drama students as they work with the roles, timescales and pressures that reflect professional theatre.

Here we take a look behind the scenes at the creative process involved in designing one of this season’s productions, Tartuffe: from costume sketches to prop-making and theatre fit-up.

From model box design and costume sketches to prop-making and build of the final set – each of our Richard Burton Co shows takes skillful preparation from #RWCMDDesign. See behind-the-scenes of Tartuffe, which opens tonight alongside Motortown and Wonder of the World. #RWCMD pic.twitter.com/veblhsO0qR

Final year Design for Performance student Bence Baksa talked about how his design for the Tartuffe set began:

“After reading John Donnelly’s contemporary translation of Tartuffe, which is set in present-day London, I researched the Highgate area, focusing on properties with five or more bedrooms belonging to upper class families.” 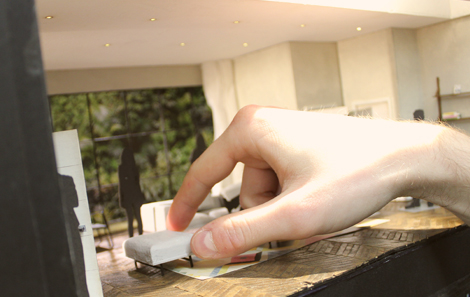 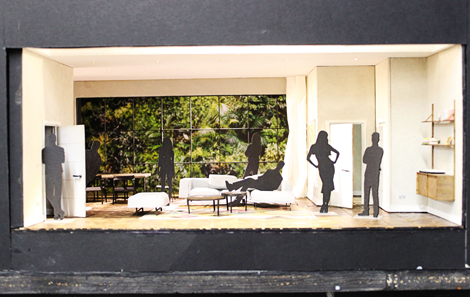 The final stage design for Tartuffe

It was essential to Bence’s plans that the set design worked with the director’s chosen vision for the play:

“The play could be staged in one room or more, depending on the scene changes. At first I wasn’t sure which option would suit the play better but I wanted the space to have a panoramic feel.”

“To get the desired look, I had to find the right height for the walls before implementing the idea of bringing the ceiling in. I didn’t know if it would be possible, but even with doubts, I couldn’t shake off the idea.”

“Fortunately, both my tutors and my director were incredibly supportive and we continued to work on the design to deliver a version we thought would work best.” 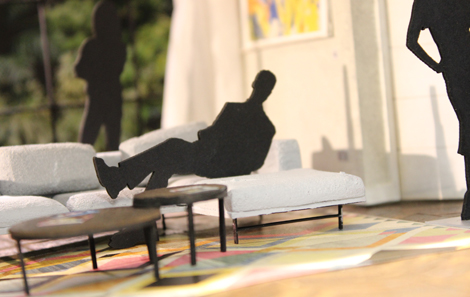 A close-up of the sofa – the model box’s centrepiece 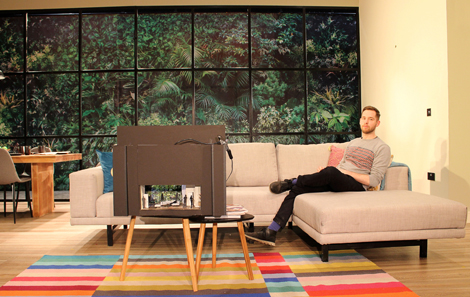 Final year designer Juliette George created a series of contemporary costume designs to work with Bence’s modern set and the style of the production. 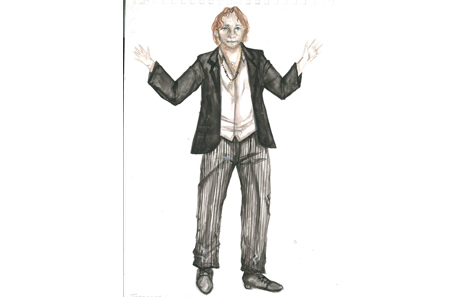 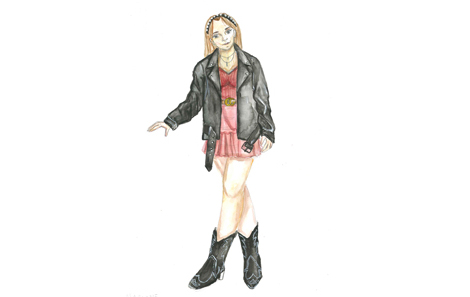 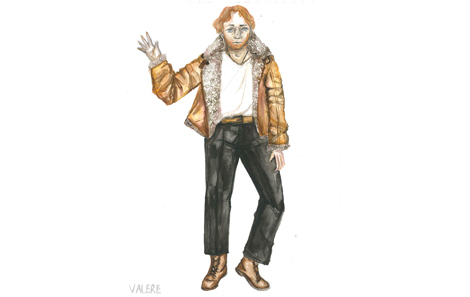 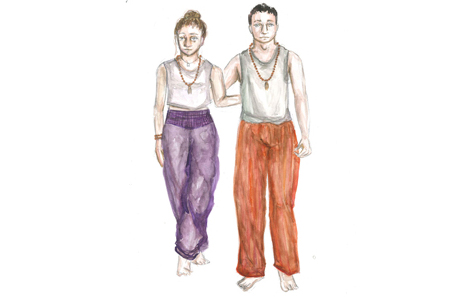 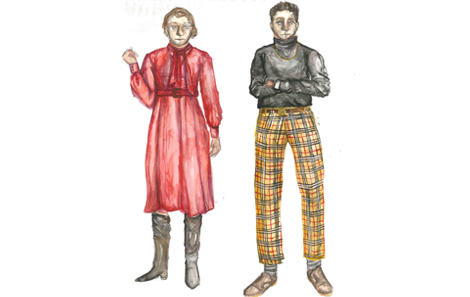 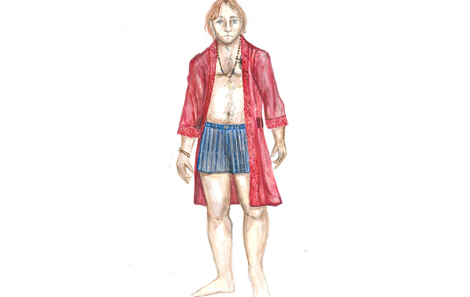 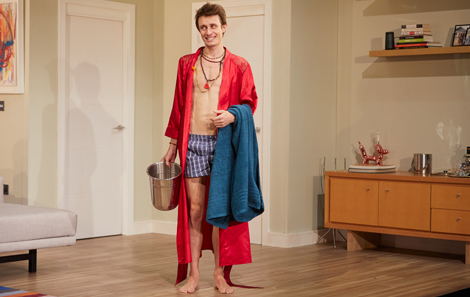 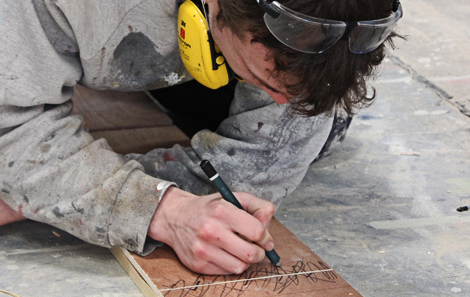 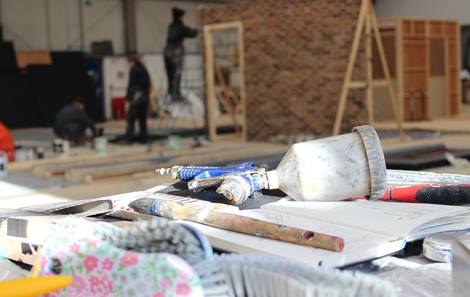 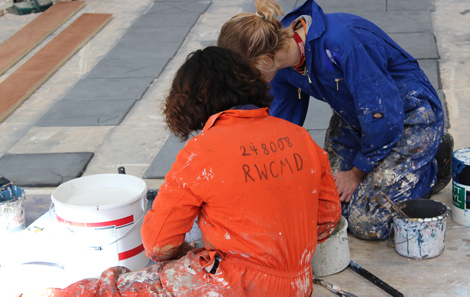 All the props and sets are designed, sketched, painted and constructed in the College’s studios, including Tartuffe‘s sofa centrepiece, which was built from scratch and scaled to Bence’s original model box design.

Because there are usually at least three shows on at once, all working to a tight timeline, the design students on the different productions need to work closely together. 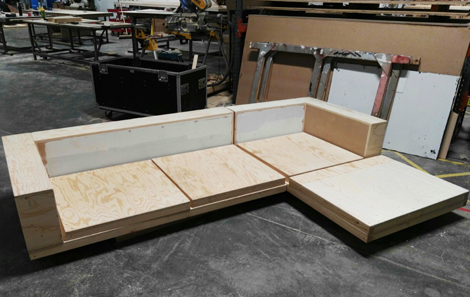 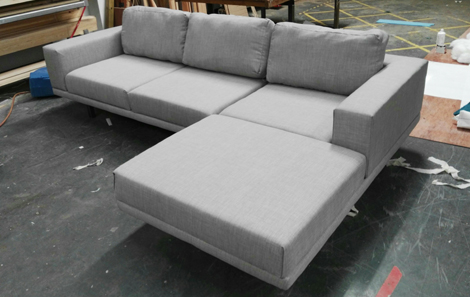 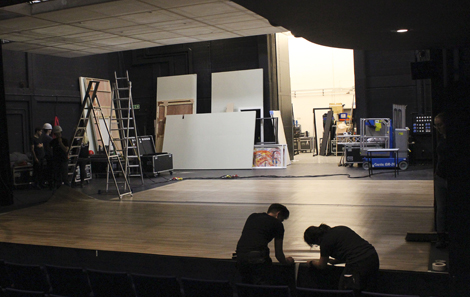 And the fit-up is underway, with the ceiling and flooring almost all in place

The ‘fit-up’ stage: stage managers, lighting designers and tech teams work together to bring the set to life.

They usually have less than a week to complete and test the set’s layout and lighting before rehearsals begin and the performances open to the public. 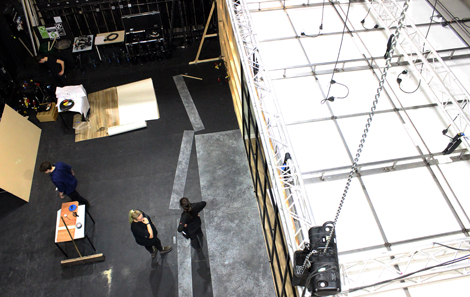 These tight deadlines mean the stage managers must be highly organised and focused, working with the design team to get the set just right. 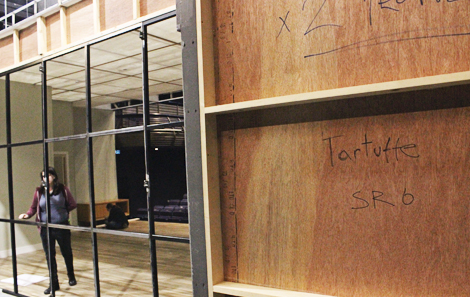 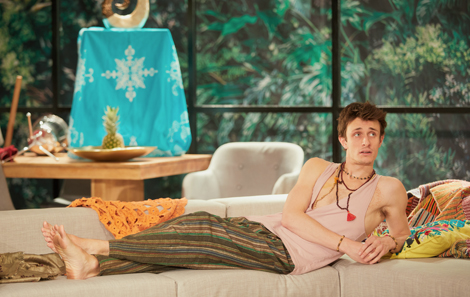 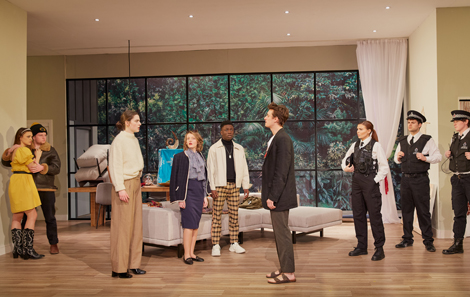 Find out more about our Design for Performance courses here.

Designing The Hunchback of Notre Dame