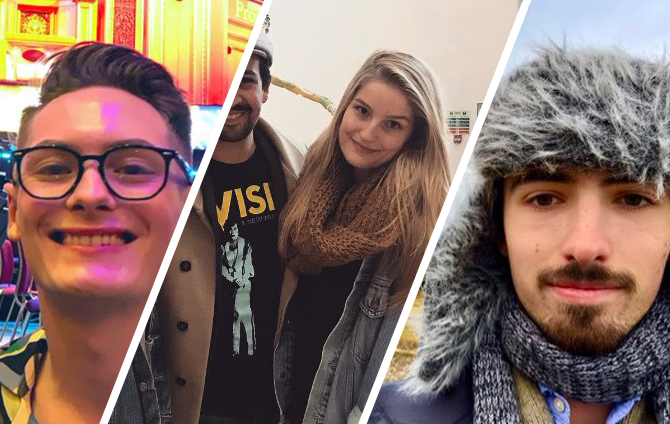 The annual event, which showcases Wales’ best composers, features Tayla-Leigh Payne, alongside Jasper Dommett and Luciano Williamson, who have both been chosen to take part in the event in previous years.

A Clockwork Portrait by Tayla-Leigh Payne

“My piece takes on this idea of your different thought processes throughout a day. It represents how things sporadically come up and interrupt your routine.

“Then, all thoughts and consciousness come together and build up to one dense texture, where every thought fights against each other before cascading over.”

How does it feel to have your composition played by BBC NOW?

“It means more than anything. It’s going to be such a wonderful experience to have my piece played by a professional orchestra.”

Had a wonderful time yesterday workshopping my piece ‘A Clockwork Portrait’ with @BBCNOW @PlowmanMusic @WatkinsHuw and B. Tommy Andersson! Such a wonderful experience especially alongside my colleagues @JasperDommett @LouieWilliamson. Can’t wait for the next rehearsal! @RWCMD pic.twitter.com/PL2DFN5tyy

Tell us about your experience with Composition: Wales 2020 so far

“My biggest challenge so far has been balancing the work involved with my College work, for example, having to re-write parts to make them more practical to play.

My one-to-one tutors have been especially supportive. I had writer’s block over the summer so I found it critical to have my tutors in support at that point.”

What’s next for you?

I also give workshops in Carmarthen every week to help actors with additional learning needs to compose music to choreograph and do a showcase.”

So pleased to have been selected to participate in the CoDI Move Programme by @TyCerdd_org, where I’ll have the privilege to collaborate and work alongside Tic Ashfield and Hijinx Theatre in writing for movement, dance and theatre! https://t.co/rkmEOQrk5z</pLeigh Payne (@tayla_leigh21) September 13, 2019

You can hear some of Tayla’s work on SoundCloud.

“When writing this piece I became interested in Béla Bartók, a Hungarian composer. In a lot of his music, he’d speak about the term ‘night music’, or a ‘nocturne’.

“That’s where I started. I thought, “If I were to write a piece about the night, how would it sound?

The whole piece is based on a melody that comes in through the cor anglais, and the harmony is then based off the same cord. The ending is kind of a reverse of the opening where notes slowly start getting pulled away to thin the melody out.”

Great first rehearsal of my new piece “Night Music” for @BBCNOW! Excited to hear the other pieces including my fellow colleagues @RWCMD, @LouieWilliamson and @tayla_leigh21! #CompositionWales2020 pic.twitter.com/mwdIjiB2Rb

What have you learned from the competition this time around?

“I think people underestimate how much work is involved in composing for an orchestra. You need knowledge and understanding about how all instruments work and how they interact with each other.

It’s important to take on advice from performers who know their instruments so that they are at ease playing your music.

I’ve had lots of support with this from my one-to-one tutor, Joe Davies. Joe really helped by suggesting what I could change to make my work cleaner and clearer, but also told me to not be so hard on myself, which gave me confidence.”

What else have you been working on and what’s on the horizon?

“I’ve been commissioned to write a fanfare for Girton College in Cambridge, the first all-female college in the UK.

“I’ve also been working on a piece for over a year, the Rothko Project, inspired by his pieces at the Tate Modern.”

Just submitted a revised score and parts ready for the next stage of #CompositionWales2020 with @BBCNOW! Looking forward to hearing the orchestra again in action! If you’re free then head down to @theCentre for a free culmination concert on the 4th of March at 7pm! #newmusic pic.twitter.com/saFkVZPkV7

Kemal at Gallipoli by Luciano Williamson

“It’s a seven-and-a-half-minute tone poem detailing a small skirmish in Gallipoli in the first World War.

Turkish field general Mustafa Kemal Atatürk ordered the charge on the British and Anzacs troops so the piece tells the tension of that battle, which structured the music.”

What does it mean for you to have your composition played by BBC NOW?

“It’s great to have the chance to work with a large orchestra.

I was part of the scheme two years ago with a shorter piece, so this time I’ve tried ideas that I’d never get to do on a smaller scale.”

What are your next steps?

“I’ve had an offer from the Royal College of Music for the Artist Diploma course (in composition), and I’m going to keep writing music to evolve my style.”

(2/2) And here are the other 4 fantastic composers who had their pieces workshopped yesterday for Composition: Wales 2020

You can hear our students’ pieces at the FREE concert in the Wales Millennium Centre, Cardiff Bay on Wednesday 4 March at 7pm.

Find out more about our Composition course.

Showcasing the College: ‘And The Sun Stood Still’ at St Davids Hall