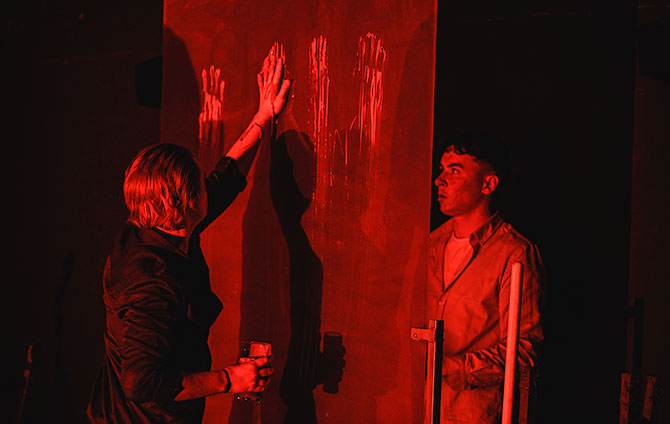 This year’s NEW season was filmed as live performances back in March, showcasing the work of the College’s Richard Burton Company.

We spoke to some of our final year Design and Stage Management students who, along with final year actors make up the Company, about working on these new plays with a writer and a director, while in the middle of a pandemic*:

What was so exciting about working on NEW?

Working on NEW gives the students the opportunity to be part of a creative collaborative team, working directly with the writer and director to create a new production that can change and develop through rehearsals.

‘It’s the first time these plays are shown and for that to be your design feels like quite a big deal,’ said Bea Viña, Set & Costume Designer for The Toll.

‘It was nice to have that director-designer collaborative stamp on the production. Some of the design elements fed back into the script and that was cool to see.

‘Part of the script changed completely when we were a couple of weeks into production and we needed a whole new set of costumes which had to be designed in the fittings. It was great to have those challenges to respond to as a designer.’ 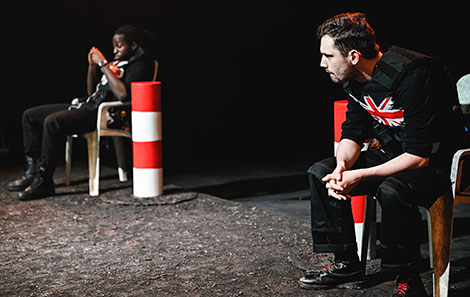 Zoe Wale was Stage Manager for The Electric: ‘The writer was lovely and accommodating, sharing her visions for the play. The director could adapt these ideas into notes for the actors and the design team could start to piece the atmosphere together.’

‘It was interesting to hear the director’s opinion of [the play] instead of talking about a pre-existing, established script,’ said Dan Southwell, Set and Costume Designer for Terroir and also Set Designer for The Electric.

‘My process changed because usually I would delve into a script and get to know it really well. The scripts kept changing so you had to be fluid.’ 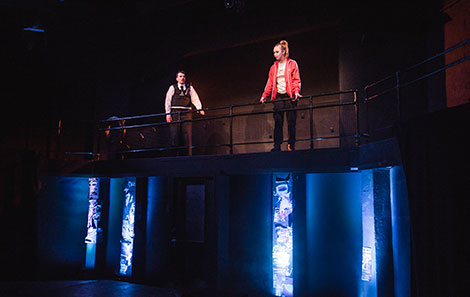 How did you cope with the challenges of creating work during Covid?

The College has been able to continue creating work throughout the pandemic* and of course this brought many challenges, but also stimulated creativity.

The Stage Managers played a large part in making sure that everyone was safe:

‘There is so much to think about!’ Said Zoe. ‘When the director asks for a simple prop, there are so many loops you must jump (where is it from, does it have to quarantine before use, who touches it, is it made of a material that can be wiped down so it can be passed or does it have to be a personal prop).

Similarly, everyone had to remain two metres apart and at the time masks were mandatory unless you were acting.’

‘Covid definitely provided an extra learning experience,’ explained Dan. ‘It was on every designers mind and each design that came about had a new way of dealing with it.

It was a big consideration early on because NEW season is usually very small. At one point in the first draft of both of my plays all 8 actors were on stage at once and we realise that the actors wouldn’t be able to move around the stage safely, so we had to move to a bigger stage!’

Bea notes how the new regulations fed into the design for the play: ‘We had these grass squares which the audience were sitting on, which was a way of bringing the social distancing into the design.’

What were your highlights of working on NEW?

Dan described how Tech (a run-through of the play that brings all the elements of the show together, with lighting, sound and costume) was ‘a massive highlight and a really useful experience because you get to be in the room with a load of other young professionals, and learn how it all works, not just your bit.’ 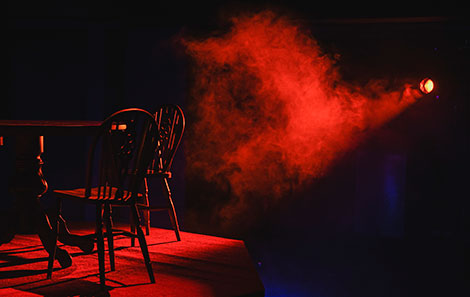 Bea explained that one of her highlights was ‘Seeing the actors inhabit the costumes, helping us to figure them out and use their costumes for their character. We put one of the characters in white gloves and when we got to tech I noticed he was using his hands way more. It was a good comic choice.’

‘I am grateful that we have been filming the plays because of the pandemic,’ Zoe said. ‘Although it is an added challenge, it does teach a new skill in how to work with a film crew. Being able to see any production from the very start to the very end is always a special feeling and makes me continue to love my line of work. Stage Managing can be challenging, but the pay off at the end is a big reward.’

‘My third year doesn’t look massively different to how it would have,’ explained Dan. ‘It’s been a more wearing experience of course, but College has been pretty much the same, which has been nice when you’re dealing with [the pandemic] along with everything else.’ 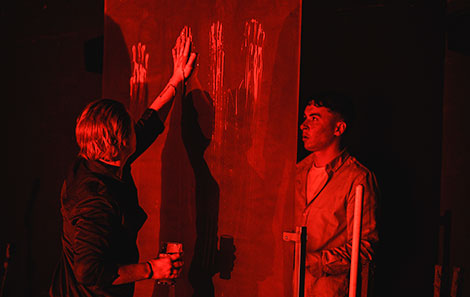 The NEW season is an amazing project and is the closest to being a professional I’ve felt. We’ve been lucky to still have the chance to put on shows during the pandemic. I know myself and a lot of other students feel very grateful we can have the opportunity to still learn and finish our degree.’

Thank you to Bea, Dan, Zoe and Emily for sharing their thoughts and insights on working on NEW, particularly on dealing with the challenges a pandemic can bring.

With many thanks to our MA Arts Management placement student Sebastian Harker for writing this blog.

*the College has been able to continue creating work during the pandemic due to our professional training status in Wales and a range of special Covid safety adaptions.

The students performed NEW live earlier this term. It’s now available to view online until June 20th. Find out how to get tickets on our What’s On page.

Find out more about Stage Management and Technical Theatre at RWCMD

Find out more about Design for Performance at RWCMD