Congratulations to Trystan Llyr Griffiths, who is the winner of this year’s Ian Stoutzker Prize. The prize is awarded annually for the most outstanding musician at RWCMD.

Tenor Trystan – who is studying for the MA in Opera Performance – was competing against soprano Aoife O’Connell, pianist Seho Lee and violist Benjamin Newton. After his performance – which included works by Rossini, Rachmaninov, Strauss and Verdi – Trystan was chosen as the winner of the £10,000 prize.

This is not the first prize that Trystan has won. In April, he was awarded the Bruce Millar Gulliver prize and in 2013, he was one of five recipients of the College’s inaugural Prince of Wales Scholarships for exceptional students. 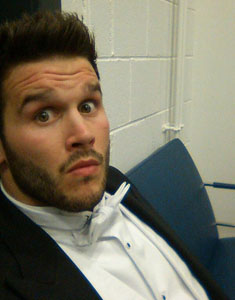 Trystan is not your typical opera singer. “My background’s not in opera at all,” explains Trystan, “it was just the route my voice took me down. I did an undergraduate degree in music, theatre and media studies at Trinity College in Camarthen, and I’ve always sung in Eisteddfods, but I never went to music college. I was a garage door fitter for three years before I started to train in opera. I think I’m a bit unusual. Most people on the course have done performance degrees and know that opera is what they want to do. For me, I’m still discovering it, slowly but surely.”

“I’ve had to make changes to my lifestyle to fit around the singing. In the past I used to play rugby in the afternoon and sing at night but that doesn’t work if you want to maintain the quality of your voice. If you’re running around all day, the first thing that gets tired is your voice. Now, if I’ve got a concert on a Saturday night, I don’t play in the day.”

Trystan is represented by Bryn Terfel’s Cardiff-based Harlequin agency and has appeared with the internationally renowned tenor on his S4C TV show, at Brynfest in London and at the Hay Festival, where they sang the Pearl Fishers Duet. Trystan is due to appear with Terfel at the Proms later this year.

Trystan will appear in Cosi Fan Tutte here at the college in July, then continues his training at the prestigious National Opera Studio in September 2014.