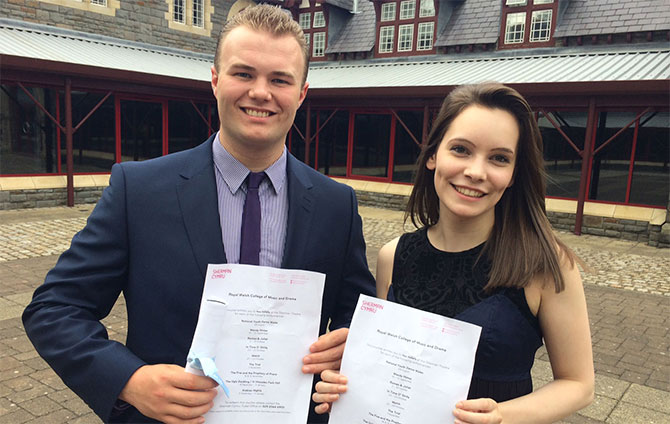 Each year the College awards two of its Young Actors Studio’s most promising young acting students with a prize given in memory of James Westaway, a talented past student at Royal Welsh College who died in 2000 at the very early stages of his career.

Ben and Carys will both receive free tickets for all of Sherman Cymru’s forthcoming autumn season.

Young Actors Studio Leader Michael Waters was one of the tutors judging the prize: “Carys and Ben have both shown great commitment and potential for further training. More importantly to us as judges, they both possess the personal qualities and dedication that the course particularly values in its students.”

Carys is going on to study acting at LAMDA in London, while Ben has recently played a lead role in the BBC/Made in Wales short film Moving On, to be broadcast in the autumn. He will be studying film at Reading University.

“The Young Actor’s Studio helped me to be more confident in myself as well as my performances,” Ben said on receiving the award. “I’ve made new friends and met amazingly supportive people who gave me new insight into the acting industry.”

“I learned so much in my time at Young Actors,” adds Carys. “Every time you walked into class you never knew what new and exciting things you’d find out about yourself and your work as performer. The tutors are incredible and the fellow students so supportive, which creates a really exciting learning environment.”