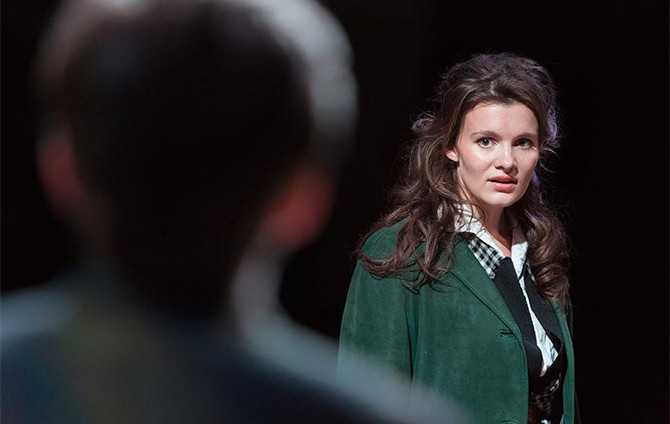 While the latest Richard Burton Company actors continue to showcase their talents in productions at RWCMD this week, we’re following the progress of some former cast members…

After graduating last summer, Emily Barber joined the cast of Billy Liar at Manchester’s Royal Exchange (main image) – her performance in the role of Liz leading to a Best Newcomer Award at the Manchester Theatre Awards in March.

This summer, she has been appearing as Gwendolen Fairfax in the acclaimed production of The Importance of Being Earnest at London’s Vaudeville Theatre, alongside David Suchet, who plays her mother, Lady Bracknell.

“The big find of the night is Emily Barber…who seems to have stepped out of a bygone age – accent, attitude, timing and phrasing spot-on.”
The Telegraph

And we have it hot off the press that, when the run comes to an end next week, Emily will join the cast of Cymbeline at Shakespeare’s Globe.

Emily made her professional debut in Cornelius for Finborough Theatre at the end of her first year at RWCMD – a role she reprised the following year for a New York transfer as part of 59E59 Theaters’ Brits off Broadway Festival.

“Stardom beckons for newcomer Emily Barber who, as the new typist, Judy, exudes pert sweetness with a slight edge and a mysterious smile.”
The Independent on Sunday

During her final year at RWCMD, Emily was supported by a scholarship from The Richard Carne Trust, which aims to assist talented young people in the performing arts. Former recipients of the bursary include Tom Rhys Harries, who is currently appearing in ITV’s adaptation of Jekyll and Hyde on Sunday evenings.

Founder of the Trust, Philip Carne, has followed her first steps as a professional actor with great interest and has been delighted with her success, commenting on her role as Gwendolen Fairfax in The Importance of Being Earnest – “It’s a wonderfully nuanced performance, very upright, of aristocratic bearing, sweet natured but determined to have her way and get her man. She cleverly implies that she is very much a copy of her formidable mother, she is a future Lady Bracknell in waiting, and that poor Algernon will be putty in her hands.”

Watch this recorded performance of Emily in the role of Viola in the Richard Burton Company’s production of Twelfth Night in December 2013.