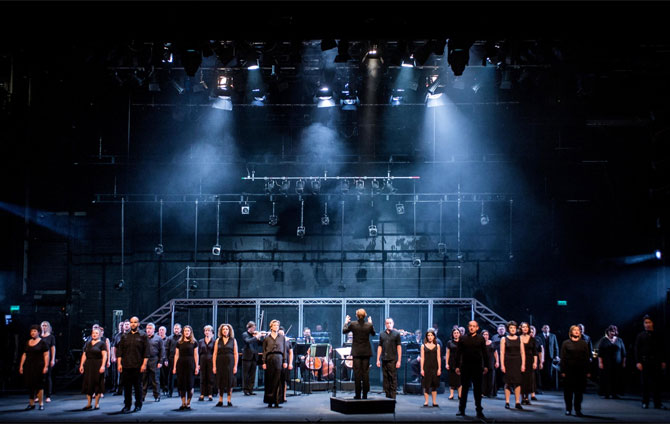 5-star reviews of Welsh National Opera’s Le Vin Herbé in The Guardian and The Independent note the dramatic use of stage and costume design.

We invited the Set and Costume Designer, RWCMD graduate April Dalton, to give us an in-depth insight into designing for the opera which is currently touring.

“Their struggle is at once liminal and physical; grounded in designer April Dalton’s matt-black innards of a set, it and they are exposed in lighting now starkly monochrome, now lustrous with sudden colour.” 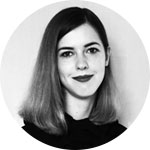 Myself and director Polly Graham worked very closely to establish the core identity of the piece and the lens through which we wanted to present it to a contemporary audience. At the centre of the opera are Tristan and Iseult, the legendary lovers from Celtic history, well known from the more popular score of Wagner.

What is interesting in Le Vin Herbé is that Frank Martin is telling this story from the backdrop of a society during the heart of World War II, when the piece was composed, and therefore it is infused with the societal turmoil of the time. It is also interesting that Frank Martin’s wife also became ill with septicemia and died during the time of composition, and this surely formed the piece’s obsession with the tight interconnection between love and death.

It had to be a space that allowed the key themes of the myth to exist- a sense of post-war, arranged marriage, tragic love, and also a space where the imagery of swords, medieval potions and lepers made sense, rather than disconnected the audience.

Alongside this, the world and the story of the Chorus had to make sense within the space- a body of people with a real urgency to tell this tale. Who are the Chorus? What is their connection with the story, what is their involvement in it? The space that we created had to be a space that allowed the two worlds to co-exist and connect, establishing a dialogue between the historic roots of the tale and the people that are telling it today. 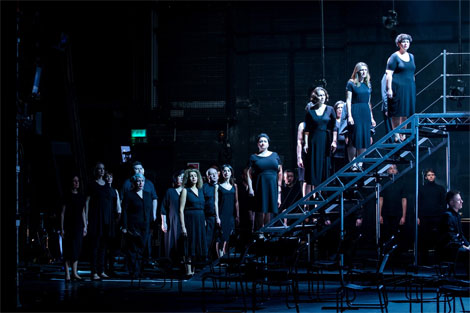 The epilogue stating ‘the World’s inconstance, and the World’s injustice…’ gives the backdrop of an unsettled society, one that seemed to have similarities with our own and therefore resonates with our very changeable times.

We were therefore always certain that the Chorus had to be contemporary, essentially a continuation of the audience, of us, grounding the myth in the real and the everyday. We saw the Chorus not just as the onlookers or the narrators, but the drivers and the puppeteers of the tale, guiding us deeper into our understanding of the story in relation to ourselves.

We explored many different design pathways and discussed different contemporary situations to ‘set’ the story within, but any situation that provided an additional agenda on top of what the piece had to offer seemed to fall at a hurdle somewhere, or be applying an unnecessary complication.

What seemed to matter most was that it was told in the current world, presented in an entirely honest, non-masked, authentic way, to match the honesty in the approach to storytelling. There seemed to be no attempt at ‘pretending’ in the libretto. Martin never pretended that we were on a boat surging towards Cornwall, it was obvious we were experiencing a re-enactment or a re-telling of this event.

We stripped away the idea of any theatre masking, exposing props tables, theatre lighting, rigging ropes, stored scenery in the wings, and stage management.

We began thinking of the design more like a site-specific piece within the shell of the proscenium arch. This exposed and ‘real’ aesthetic also seemed the perfect accompaniment to the fragile, austere score.

Within this bare skeleton of a stage, we practically wanted a raised level to enable us to isolate Iseult and Tristan from the rest of the Chorus, to highlight them and provide almost a second ‘stage’ to play out their inner thoughts, while the Chorus could watch, seated like audience to enjoy a moment of theatricality. This platform also gave us the bare essentials in the suggestion of the deck of a ship or a pier walkway.

The costume designs for the Chorus are based on the idea of a united ensemble of people, coming together to perform this piece, in smart and contemporary concert ‘blacks’, essentially playing themselves.

Their united vision of blacks also allows them to disappear at times as ‘puppeteers’ to Tristan and Iseult, creating and guiding their movements in the story. It also enables them at times to become part of the set, moving en masse to create the sense of surges of waves and turbulent tides, but also, dressed all in black, a mourning society. 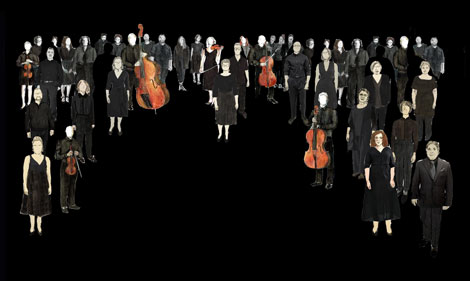 Costume designs for The Chorus

The Orchestra are also designed in black to blend amongst the Chorus, allowing the Orchestra to be invested wholeheartedly as storytellers also. Setting them centre stage, we wanted to give them a greater presence than the usual orchestra pit, allowing the beautiful solos of the strings and the running keys of the piano to become a central part of the drama.

In exposing the sparse orchestra within the vast shell of the stage, we aimed also to highlight their diminished quantity in comparison to Wagner’s full orchestration, giving the sense of loneliness, sparseness, loss, thus reflecting society and Frank Martin himself at the time of composition, as well as the psychology of the lovers. 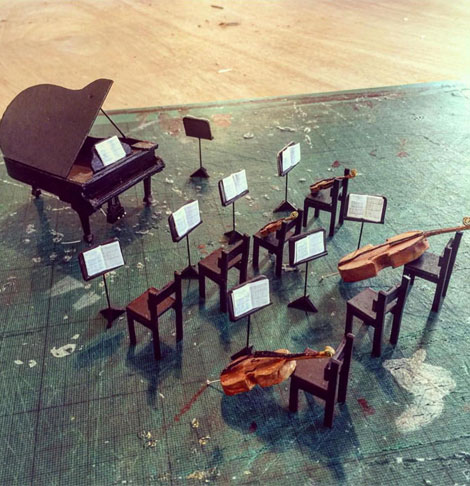 The Costume designs for Iseult and Tristan give them a higher sense of detail and developed characterisation in comparison to the Chorus. 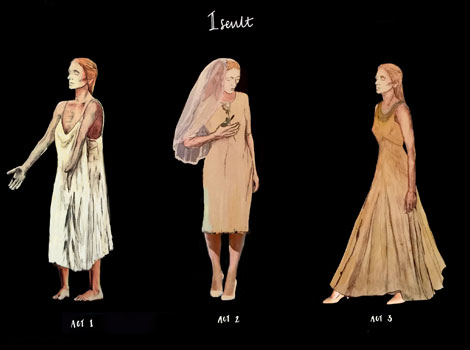 During the prologue, they stand among the Chorus, blending into the blackness from which their characters emerge. Iseult is then revealed in a simple, basic white slip dress giving her a sense of ‘other’, a mythical quality, in which the pure white makes her stand vibrant against the black surround of the set and Chorus costumes.

This basic and baggy slip also gives a sense of kidnap and vulnerability as she is brought over from her homeland of Ireland, against her will, to marry the King. 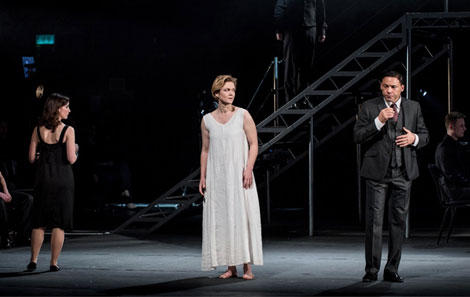 Throughout the piece the costume designs show her journey and transformation: a more fitted cream shift dress, heels and metal crown to show her marriage to King Marc and finally a light gold silk dress for Act 3 to show her transcendence and triumph at dying alongside her lover.

In Tristan’s costume design, we see his decline from a high-regarded, suited member of King Marc’s regime, to breaking free of authority and loosing himself in the turmoil of his desire for Iseult. 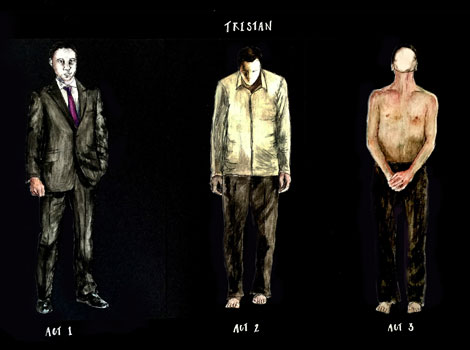