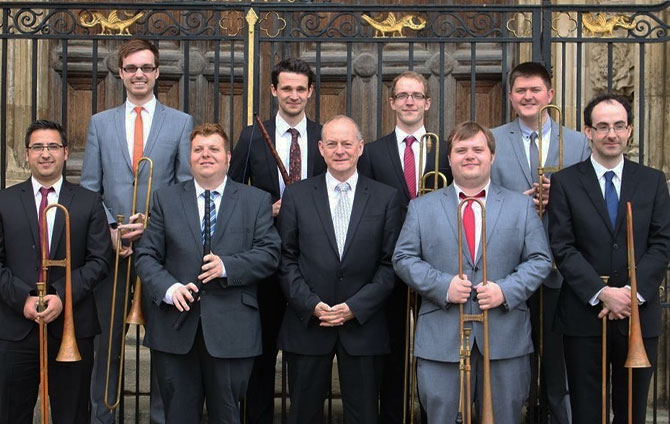 Three musicians from the 2014 Baroque Brass graduating class have started promising careers in the highly competitive specialist field of cornett and sackbutt performance.

Under the guidance and expertise of RWCMD Fellow and cornett virtuoso, Jeremy West, the College has been able to provide a platform to enable and nurture training in these historical instruments through the cornett and sackbutt consort.

With the help of RWCMD’s Head of Brass, Kevin Price, students’ activities are prioritised to work around Jeremy West’s cornett and sackbutt consort, to ensure that musicians interested in pursuing training in these specialist instruments are provided with ample training and support.

“We are privileged to work closely with Jeremy West, who is a revered figure in his field. The opportunities and wisdom that he provides serve to create the perfect platform for our young professionals to develop a strong profile as specialist players before they graduate from RWCMD.”

We spoke to current student, Lloyd Pearce about his experiences learning the cornett at College with Jeremy West.

“What’s been most interesting about the cornett and sackbutt ensemble is learning the different style of playing. You go back to the roots of music – of how it used to be. Traditionally, this style of historical music was performed backing a choir, so the style of playing lyrically really brings the musicality to the forefront.” explains Lloyd.

“These days there’s such a lot of emphasis on contemporary music that it’s refreshing to go back to the roots, which inevitably enhances your whole overall ability of playing music. Learning the cornett and early music style has definitely informed and shaped my musical knowledge and I’d say I’m a more well-rounded musician because of this training.”

Conor Hastings (BMus 2014, Baroque Brass) has recently been appointed to the English Cornett & Sackbutt Ensemble, performed with the Gabrieli Consort & Players in the USA, with the King’s Consort in Germany and is about to make his debut with His Majesty’s Sagbutts & Cornetts in Spain.