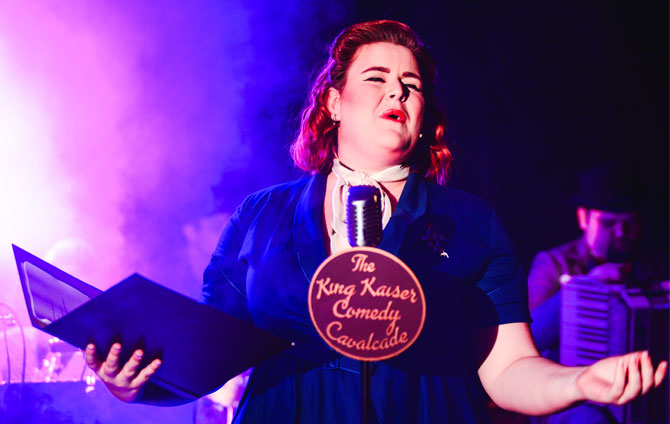 Musical Theatre student Becca Barrett marked a first at the College this week, including a monologue in American Sign Language as part of her showcase performance during #DeafAwarenessWeek.

The performance in ASL and English in the Musical Theatre Showcase was the first time American Sign Language has been performed on the Richard Burton Theatre stage.

Becca, from the USA, became fascinated with American Sign Language which she learned from her mother, who worked with deaf people.

We caught up with her to hear more about her influences. She talks accessibility, representation, and the importance of diversity below.

One of the most impactful theatre experiences in my life was the first time I saw Deaf West’s revival of Spring Awakening on Broadway.

Their production was entirely bilingual in American Sign Language (ASL), and English. Most of the characters were played by deaf actors, with a hearing actor as their singing and speaking “voice”.

The addition of deaf culture and history brought the central conflict of the show, communication, into focus and made the tragedies of the characters more poignant.

ASL is such an expressive language, and the way the creative team merged ASL with dance to create these gorgeous movement sections was absolutely breathtaking.

It inspired me in its ingenuity, its bravery, and its cohesion; there was not a single stone left unturned on that stage.

It’s theatre makers like Deaf West, who challenge us in how we conceptualize and execute musical theatre, that make me the most excited to be a part of this industry.

This production asked the audience to consider what it really means to experience a musical.

For someone who can’t hear, the storytelling through movement and lighting far outweighs the sound. Their production used every element of theatre available to them and they created a show that used our other senses of sight and smell (during a scene in a church, actors walked through the  theatre with incense) to include a brand new audience, as well as challenge the hearing audience to rethink what is possible in musical theatre.

Our art doesn’t exist without an audience, so to see a production that focused on accessibility to its audience truly changed my perspective.

The deaf actors were honestly some of the best actors I’ve ever seen, and it felt so important to see their interpretations of these characters.

We get so used to seeing the same kinds of people playing the same roles, and I think we deny ourselves the opportunity to experience different perspectives of the characters we know and love. We should be asking ourselves, as artists, how people from different backgrounds and life experiences find their way into the same character?

How can they use their experience to flesh out another color, another shade of these characters’ personalities? In the case of Spring Awakening, many of the characters were played by two actors, one Deaf and one hearing, and their collaboration made the characters so dimensional and complex.

Diversity in theatre is so important, and Spring Awakening reminded me of that.

Funny enough, I was headed to see the show for the fourth time (I was obsessed) – the same day as my audition for Royal Welsh College. Unfortunately there was a huge blizzard that day and Broadway shut down. Luckily, Royal Welsh still held their auditions! Otherwise who knows where I’d be now?