The Next Stage: Another Successful Year for Pembs Young Actors 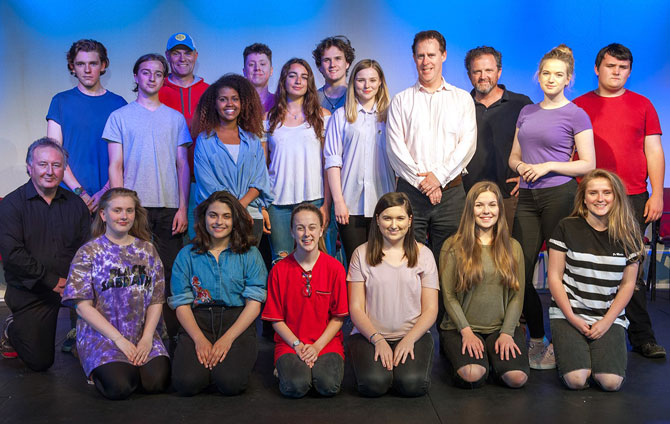 Yasemin Ozdemir, (front row, second left) from Haverfordwest, is the first West Wales Young Actors Studio student to gain a place on the undergraduate Acting course at the Royal Welsh College, joining the 14 other students who have joined the College through Young Actors Studio, Cardiff.

Each year, competition for one of the 20 places on the course is fierce and the College received over 1,100 applications in 2017.

Standing alongside Julian Lewis Jones is Ellinor Larson, from Haverfordwest, who is making good use of her gap year by joining Young Actors Cardiff to broaden her experience and skills, while Matthew Thomas from Llanelli is now studying acting at Bath Spa University. Dan Simcox (at the end of the back row), from Haverfordwest, has also won a place at Birmingham Conservatoire to study theatre.

The other, younger students are now busy preparing for their own auditions in the coming months, working alongside RWCMD staff and sitting in on BA classes in Cardiff as part of their preparation.

With support from Valero, 95% of students in Pembrokeshire have received scholarships and financial support to enable them to take part in Young Actors Studio.

Stephen commented, “Valero believes very deeply in the role the arts can play in improving the life chances of young people, and we take great pride in working with the Royal Welsh College of Music & Drama to ensure young people across West Wales have these opportunities to achieve great things in the creative arts.”

Launched in 2014, over 900 young people have now engaged with the project through drama outreach, with 12 schools taking part in workshops across the region.

Young Actors Studio: a “Rich Source of Talent for RWCMD”