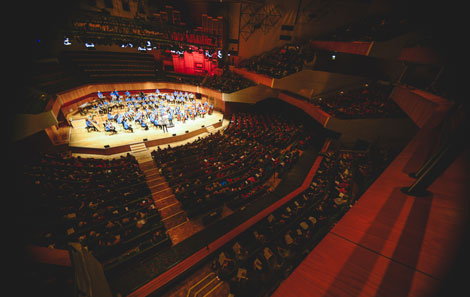 The RWCMD Symphony Orchestra performed for over 1400 children in Cardiff and Carmarthen this month. 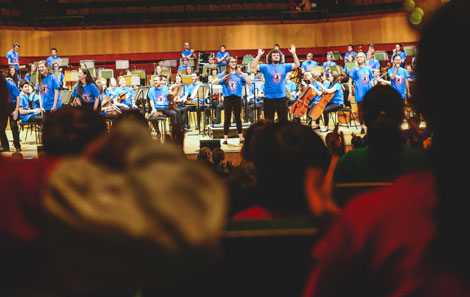 This ambitious new project aims to inspire school children to engage with classical music, and will reach around 3000 5-18 year old school children across Wales over the next two years.

Year 4 pupil Chloe Williams conducted Tchaikovsky’s Waltz of the Flowers in front of over 1000 other school children at St David’s Hall.

“ This is brilliant. It’s so great for the children to see young people playing classical music.

They always think that classical music is just for very old people! I wish we could do this for the whole school.” Ms Almanita Weston, teacher at St Mellons Church in Wales School, Cardiff

“Discovery, participation and learning are at the heart of this project.

We hope that the concert will help the children to develop skills in listening, cultural awareness and social interaction, as well as inspiring both teachers and students to discover more about music and the performing arts,” says Kevin Price, Head of Music Performance.

The concert at St David’s Hall was supported by the Arts Council of Wales and Western Power Distribution.

Following February’s performances, the concert will travel to North Wales next Spring as Orchestradventure On Tour!, supported by The Prince of Wales’s Charitable Foundation.