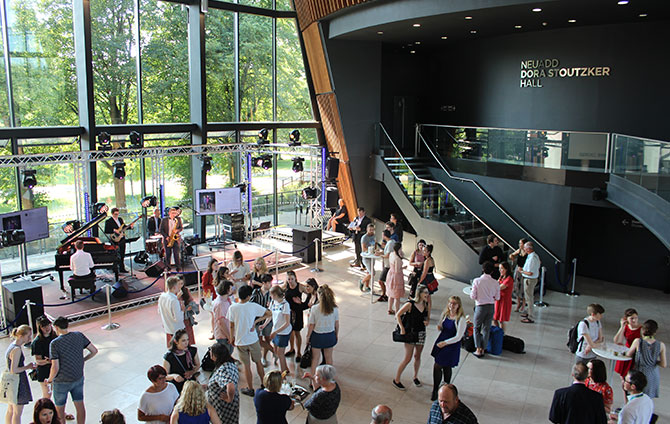 Continuing our celebration of our alumni, the RWCMD Associates has been created to recognise recent graduates who have established themselves and made a significant contribution early in their chosen career.

Congratulations to all those who received this award, it was lovely to see many familiar faces return to College for the celebration and launch event.

The Associates are examples of the aspirations the College has for its all graduates and we are delighted to recognise their achievements formally,” said Brian Weir, Director of Student Experience.

“This year the College is awarding graduates from the music department. In 2019 the College will continue the scheme by recognising those nominations from courses in acting, design, stage management, musical theatre and arts management.”

Chris Avison, graduate from 2009, is the Principal Trumpet of the Bournemouth Symphony Orchestra, a position he has held since September 2013. He has also performed with the Philharmonia, BBC Symphony, Royal Philharmonic, BBC Philharmonic Welsh National Opera orchestras.

Composer Mark Boden graduated from RWCMD in 2008 and has been commissioned by a varied range of ensembles including the London Philharmonic Orchestra. Numerous orchestral works have been broadcast on BBC Radio 3, including the BBC Symphony Orchestra’s 2017 Christmas Day broadcast. His Clarinet Concerto was commissioned as part of BBC NOW’s 90th birthday celebrations.

Very pleased to have been made an inaugural Associate of the Royal Welsh College of Music & Drama last night. Poignant speech by outgoing principal George Caird about the importance of culture in our society. Diolch yn fawr to everyone @RWCMD for great evening #ARWCMD #composers pic.twitter.com/i9vhwVbRqB

David Childs, the first euphonium soloist to win the brass final of the televised ‘BBC Young Musician of the Year’, is a graduate of 2004. He has toured extensively as a soloist in Australia, New Zealand, the Middle East, Japan, Hong Kong, Europe and the U.S.A, and been a concerto soloist with the BBC National Orchestra of Wales, Royal Philharmonic, BBC Concert Orchestra, RTE Concert Orchestra, BBC Philharmonic, Sinfonia Cymru, Welsh Chamber Orchestra and DCINY Symphony.

Soon after graduating in 2001, Elen Elis was appointed Chorus Manager at the BBC National Orchestra of Wales, and in 2005 Chorus Manager at the City of Birmingham Symphony Orchestra, where she worked for eight years, managing several internationally touring symphonic choirs. In 2013 she began her current role as Artistic Director and Organiser of the National Eisteddfod of Wales. 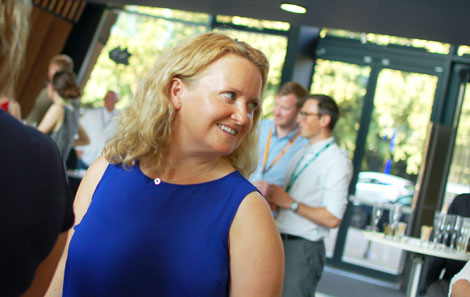 After graduating from RWCMD in 2010, mezzo soprano Justina Gringytė won the 2015 International Opera Awards Young Singer of the Year. She has played the title role in Carmen for both the English and Scottish National Opera companies to high acclaim. She has also performed in various productions with Welsh National Opera, (including her recent La Forza, conducted by International Chair, Carlo Rizzi)  Royal Opera House, Vilnius City Opera and Bolshoi Theatre in Moscow. Her debut recording; ‘The Complete Rachmaninov Songs’, with pianist Iain Burnside was shortlisted for the 2014 Gramophone Awards.

Really delighted to be made an inaugural Associate of @RWCMD today. Much to be thankful to the college for. Like, a career.

Dawn Hardwick, 2003, is a London-based soloist, chamber, orchestral and contemporary pianist and member-director of the original six-piano ensemble, Piano Circus, who are at the forefront of commissioning and performing new works for multiple pianos. She has wide experience as a soloist, most recently performing John Psathas’ double concerto View From Olympus for amplified piano and percussion with Dame Evelyn Glennie.

I’ve had to keep quiet about this for the past six weeks or so, but I’m super proud to be in Cardiff today to be one of the first to receive an Honorary Associateship of the @RWCMD #ARWCMD pic.twitter.com/Ryws1vwrmu

Matt Hardy (2010) has been Principal Timpanist of the City of Birmingham Symphony Orchestra since January 2018, having previously held the position of Principal Timpani and Percussion with the Scottish Chamber Orchestra. He has continued to maintain a busy freelance career working all over the world with many of the UK’s finest ensembles and with the Aurora Orchestra.

Joanne Higginbottom graduated in 2010 and immediately relocated to Los Angeles where she began work with Tyler Bates on Zack Snyder’s Sucker Punch. As a composer, producer and musician, Joanne leads a vibrant and diverse musical life and her work can be heard in blockbusters such as Guardians Of The Galaxy and Deadpool 2. Outside of film and television she has worked on distinguished video game titles such as Sony Playstation’s God Of War: Ascension and Gorilla Games’ Killzone: Shadow Falls. As a keen vocalist and percussionist she has performed on stage with Tom Jones, Alison Mosshart, Tim Minchin and Marilyn Manson.

Fazliddin Husanov is a pianist of international reputation with a career spanning four continents. His awards include first prize at the London International Music Competition in 2001, the Maisie Lewis Award, the Bronze Medal in the Rachmaninoff International Piano Competition and Festival in Los Angeles. His wide ranging repertoire encompasses baroque, classical, romantic and contemporary music. He combines his career as performer with his role as Professor of Piano at the College of Fine Art & Music, Kuwait.

Christiana Mavron graduated from RWCMD in 2003 and, since 2006, has been a regular 1st violin extra with the WNO Orchestra and is also a 1st violin extra with Scottish Ballet. Chrissie is the founder member and leader of the Mavron Quartet which, since 2010, has held the position of the first ever Ensemble in Residence at St David’s Hall.

After graduating in 2007, Rebecca Nash went on to lead her own originals project, ATLAS which set to release its debut album later this year on Stoney Lane Records. Musical highlights have included internationally renowned festivals such as Cheltenham, Manchester London, Bristol, Cambridge, Glastonbury and Scarborough as well as many other jazz clubs including Ronnie Scott’s Jazz Club, The Vortex, The 606 Club, and the Southbank Centre.

While studying at RWCMD, Byron ‘Buzz’ Newton was the first brass student to win the RWCMD Concerto Competition and was awarded a mark of 100 in his final recital. Since graduating in 2012, he has been in high demand as a soloist, teacher, and freelance musician. He holds the position of Principal Euphonium and Assistant Musical Director with the Wellington Brass Band and is a Teacher at the New Zealand School of Music He has performed with the Christchurch Symphony Orchestra, the Auckland Philharmonic Orchestra, and the New Zealand Symphony Orchestra.

2005 graduate Dan Perkin is much in demand as an accompanist, workshop leader and musical director specialising in new music for performance by, or performance for young people. Passionate about outreach, he regularly leads workshops and performances for families, people living with dementia, as well as regular sessions in mainstream and SEND schools through the WNO Hodge workshop program.

As a freelancer, Jennie Porton (2011) enjoys a varied career as a performer, teacher and researcher. She works regularly with WNO and BBC National Orchestra of Wales on both clarinet and saxophone, joining them on UK and foreign tours. She freelances on musical theatre touring productions across the UK and Europe and within London’s West End. Jennie has also been frequently invited to join New York City based disco-funk group Escort on their European tour dates.

Welsh mezzo-soprano Samantha Price, graduate from 2010, was a Finalist in the 2014 Young Welsh Singer of the Year Competition. She made her English National Opera debut while still a student and has subsequently performed in the Marriage of Figaro, Madam Butterfly and Ryan Wigglesworth’s The Winter’s Tale. She appeared in Shakespeare Live! at the Royal Shakespeare Theatre, Stratford and her concert engagements include performances with the Dresden Philharmonic Orchestra.

Since graduating in classical piano from the Royal Welsh College of Music and Drama in 2002, Dave Stapleton has become an important figure on the UK jazz scene. He is a composer of beautiful, lyrical tunes and film scores and a record producer, who brings to the music of others the same care and attention to detail that he lavishes on his own releases. He is the co-founder of Edition Records and is receiving high recognition for his work.

Violinist Sabine Stoffer (2010) performs as a baroque violinist throughout Europe. Her chamber music groups include the duo Libro I with the lutenist Alex McCartney, the Ensemble Otium and The Poker Club Band. Her career has taken her to many festivals, such as the Lufthansa Festival of Baroque Music London, the Händel Festspiele Göttingen, the York Early Music Festival. Sabine also works as a teacher for Baroque Violin at the Musikschule Konsi Bern.

Since graduating in 2010, Gareth Treseder has performed as a consort tenor soloist in several recordings and performed with the London Symphony Orchestra the Berlin Philharmonic Orchestra. Recent solo performances include a special performance in front of HRH The Prince of Wales in Buckingham Palace; Monteverdi’s Vespers in New York’s Carnegie Hall &; Mozart’s Requiem in the Royal Albert Hall. He is a published composer of sacred and secular choral works.

I'm very proud to have been made an Honorary Associate of the Royal Welsh College of Music and Drama. Without their expert tutelage nearly ten years ago, I wouldn't have experienced nearly as many musical career highlights. Thank you, @RWCMD