Humans of RWCMD: The Flautist 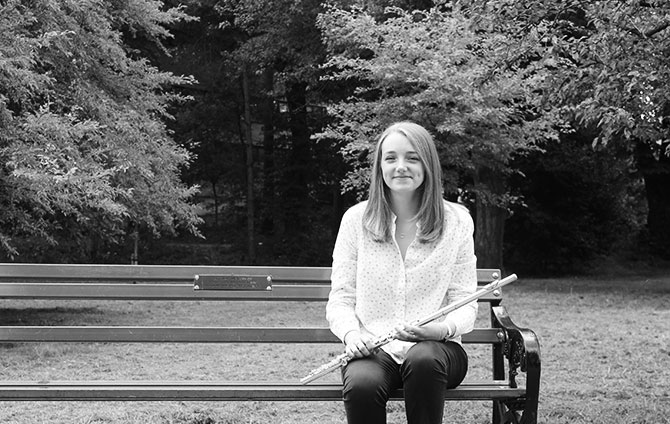 Introducing Charlotte Thomas, a flautist and recent graduate who studied at the College for her undergraduate and postgraduate degrees.  Since graduating she’s already played in the BBC Proms and has settled in Cardiff to pursue a career as a professional musician. This week Charlotte has also been playing at the National Eisteddfod of Wales as part of Encore at Tŷ Cerdd.

She chats to us about taking the next step out into the world and tells us a bit about the best parts of studying at RWCMD.

Where have you come from?

I’m from Wrexham in North Wales. Both my parents are music teachers and they actually met at the College. I started playing flute in school when I was about 8, through Wrexham Music Service. I am so grateful for that opportunity which led to playing in regional and national ensembles and kick-started my love for playing in orchestras – I have a lot to thank them for!

What did you study here?

I studied Flute BMus and MMus, so I’ve been here for 6 years!

Happiest moment from being at College?

The final Symphony Orchestra Concert in St David’s Hall. It was a really engaging programme and the concert felt like it slotted together. When we all stood up together at the end I was like ‘Oh gosh this is it, this is the last time I’m gonna stand up in a college ensemble’.

What do you do outside of College?

Teaching and playing takes up most of my time, but in my spare time I like to walk the dog back in North Wales and I’m trying to do more exercise – bit of jogging and swimming. I also love spending time with friends and family.

Do you have any plans for the summer and afterwards?

I’m staying around Cardiff and doing a mixture of playing and teaching. Bits and bobs all over the place. I’ve got some work with the BBC over summer and some work with WNO next season. It all came off the back of placement on the orchestral course which was so helpful.

What have you created/done that you are most proud of?

I did an outreach module this year. It was a project over 6 sessions and I went into schools with a group of volunteers from the College to do a workshop with a year 5 class. We explored how we could make every day sounds into music or a rhythm by splitting the children into four groups and creating a piece about Cardiff. So one group was the castle, one group was the Bay, one group was the stadium and one group was the city centre. We recorded them and in between we had a bus rhythm, a boat rhythm and a walking rhythm. It was great. It turned out so much better than I thought it would and the children engaged with it so well!

What’s the best piece of advice you’ve ever received?

I remember seeing a video about life at college that they used to show on the screens when auditions were happening. It was of a student who has gone on to do really well in arts management and I remember him saying to be like a sponge; take every opportunity. Generally, we get given that advice a lot at College.

I feel like the future would be interesting but the past would be better because you could see how things were and re-live your life to have a more positive impact on the future.

A truly awesome sight – hundreds of musicians on the @RoyalAlbertHall stage for tonight’s roof-raising performance of Mahler’s epic Symphony No 8 pic.twitter.com/CHI49v54UW