Humans of RWCMD: The Violinist 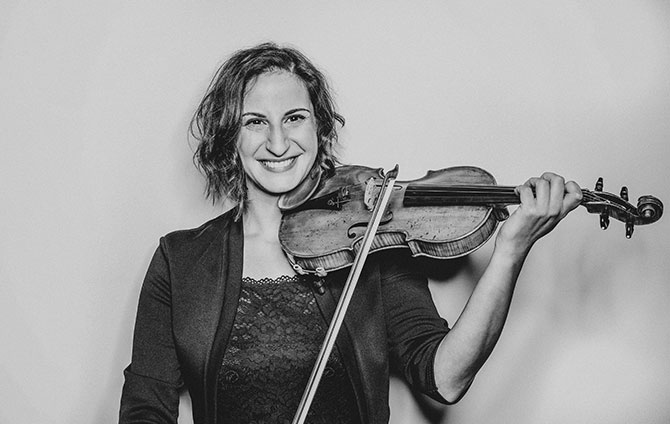 Introducing Christiana Mavron, violinist and one fourth of the Mavron Quartet, a Cardiff based quartet that have been commended by BBC Radio 3 as “Wales’ leading string quartet.” Chrissie graduated from RWCMD in 2003 and has recently been made one of the first Associates of the College. She will be playing again with Welsh National Opera in the Autumn season which opens with David Pountney’s new production of War and Peace in September.

We caught up with Chrissie to find out what she has been up to recently and some of her favourite moments from studying at the College.

What did you study at RWCMD?

What do you think of the college now? Has it changed?

Yes, there’s been a big change with the opening of the new concert hall. There’s a buzz about the College with all the new facilities which is great. Before the Dora Stoutzker Hall was officially opened, the Mavron Quartet was asked to play in order to test the acoustics. There were lots of people walking around with hard hats as we played excerpts from various string quartets- it was surreal.

What are you doing now?

I’ve recently been working with the brilliant Helen Woods and the Arts Active Team at St David’s Hall for the Tiddly Proms- Cherry Pie’s Holiday Adventure (I played Vicky Violin!). But I’m currently taking a little break to spend time with family and enjoy the rest of the summer.

I’ll be back in with Welsh National Opera for some of their autumn season. I’m especially looking forward to War and Peace which will be a new opera for me- I’m a big fan of Prokofiev.

Mavron Quartet have a tour coming up in October, premiering a new work ‘Radio Amore’ by composer Charlie Barber. I’ve known Charlie for many years, so will be great to work with him again.

After that, I’ll be working with composer Tom Green to plan another tour of our digital chamber opera ‘The World’s Wife’ which we commissioned last year. Mavron Quartet co-produced the project alongside Welsh National Opera and Echo Forest and in October 2017 we premiered it in the Wales Millennium Centre. The premiere was extra special because poet laureate, Carol Ann Duffy whose poems the opera is based on, gave a pre-concert talk and really supported what we did with her poems! We toured around Wales, with great reviews, so very excited to take it further afield.

The puppetry show- it was like walking into a dream.

What’s the best thing that happened to you last week?

Is there anything you regret not doing?

Nothing springs to mind but I generally try to keep looking forward.

Would you rather lose all of your money and valuables or all of the pictures you have ever taken?

Lose all my pictures, I wouldn’t want to lose my violin!