Year of the Dog in Netflix Hit Sex Education

It’s funny, raunchy, it’s getting rave reviews, and what’s more, it’s got RWCMD musicians acting and performing in it!

Year of the Dog play the School Band and were originally brought together last year (2018, the year of the dog) by composition student Felix Lindsell-Hales when he needed a band to record his new song, Run These Streets.

Year of The Dog, who describe themselves as ‘a raucous six piece from Cardiff with an original brass blasting concoction of funk, ska, reggae and swing’  are composition students Felix, as lead guitarist and singer, Dan Hall on trumpet, Peter Richards on bass trombone, and jazz students Jacob Prescott on bass, Luke Hartley, drummer and Ollie Jenkins on sax.

Sex Education was filmed locally in Wales, and Netflix were on the look-out for young Welsh musicians to fulfill the brief of appearing as ‘The Cool Kids’ in the school. 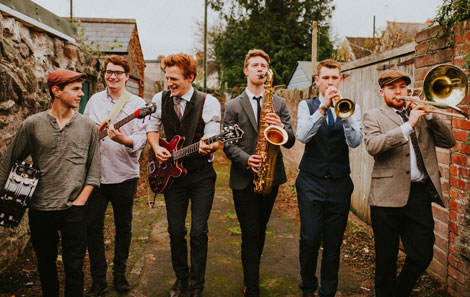 Year of The Dog

Our guys stepped up to the mark, and ended up not only being the school band but also having their original song featured in episode 3 –the song that brought them all together in the first place. (Run These Streets is also their encore song when they perform live, and they’re currently recording it.)

Headboy Jackson, played by Kedar Williams-Stirling, and now a good friend of the band, came to the College over the summer to work with the boys on his big song:

So what was it like for the musicians being actors in a full-on Netflix series:

“Working with highly trained young actors, musicians and designers every day at College prepared me for the communication skills, professionalism, and ability to work under extreme pressures with professionals in all sorts of areas within our industry,” says Felix.

“Thanks to this we all gained a strong friendly relationship with everyone from the actors, to the directors and the crew!”

He goes on, “Having said that, I’d say overall it felt strange and had to concentrate quite hard at mine and Luke’s speaking lines – it didn’t come naturally as we’re musicians not actors!

As a group of like-minded mates who are constantly making each other laugh – especially on set – it was really hard to keep a straight or angry face when the majority of our scenes were extremely funny!”

How great is this? Da iawn @NetflixUK pic.twitter.com/eOWkU5VE3W

A second series will begin filming in Wales this Spring!

Year of the Dog can be found performing around Cardiff and at various festivals over the summer.