NEW:2019 – Designing for Between Eternity & Time 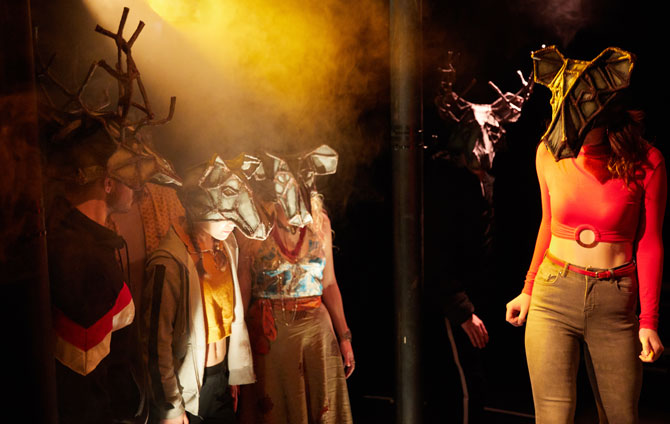 Harry Lee is the designer for two of this year’s plays, Between Eternity & Time, and Kasimir and Karoline. He talked to us about overcoming the particular challenges that NEW presents and his inspirations working on two very different plays.

The show’s director, Hannah Noone, has described the piece as ‘epic’ on many occasions, yet the space itself is far from being so!

We often adopt a more fringe theatre approach because the venue seats fewer than one hundred people and the crew is minimal. This means that everyone works together as a close-knit team and that roles frequently overlap. 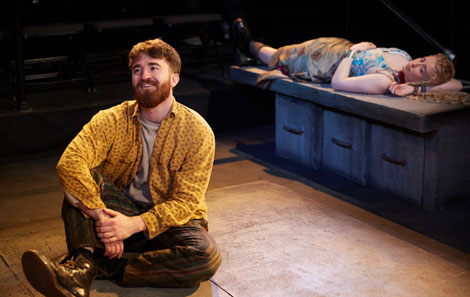 There’s often less than forty minutes between shows during New Season, so I created construction drawings early on in the design process to ensure we had a set that could be easily moved and dismantled to help the stage management crew right from the start.

My main love and theatre background is in site specific theatre, so I relish the challenge these spaces present.

And most of these are to do with the venue: the venue itself is unusually shaped, with beams and pillars at challenging places. The low ceilings limit set height, and storage space is tiny so sets often have to subscribe to the ‘Russian doll’ technique. 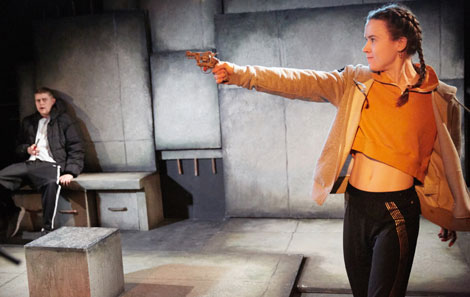 Because of space/set storage limitations, the play frequently relies on light, so I’ve worked with our Lighting Designer Leonora Nicholson and we’ve used it to aid the creation of the many different locations and atmospheres.

From the very beginning of the design process I knew I wanted the set to act almost as a blank canvas for lighting, allowing stark scene changes between a multitude of very different locations and times of day. 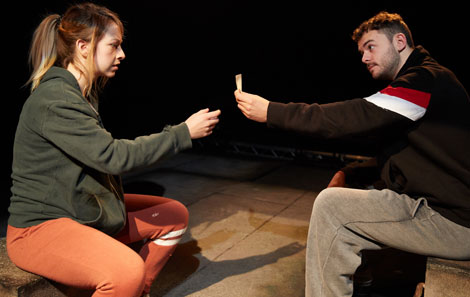 What was your Inspiration for the set?

Brutalist architecture based on Liverpool council estate tower blocks, which were recently in the news for their poor living conditions and derelict spaces.

The play’s main plot arc co-exists with a series of heightened reality forest scenes; the two worlds gradually intertwine as the story approaches its climax. Crucially, it’s a play of contrasts – safe/unsafe, experimentation/safety, urban/natural, and I really wanted that to show in the design. 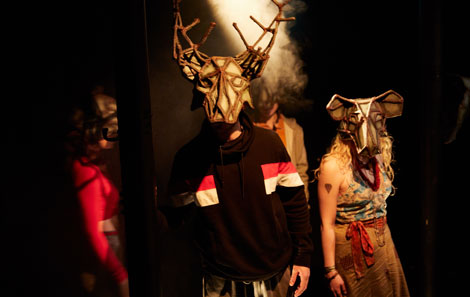 The stark concrete set design is layered with subtle earthy colour tones to further bind the two worlds together, as well as a dark, greenish-black mould at the edges of the set, blending into the black walls of the venue.

The show is fast-paced, with 21 scenes and eight different locations. To tackle this the design includes modular blocks, which can be pulled from the set to be used as seating, cooker hobs, coffee tables… almost anything the play requires. They’re also hinged to store props which need to be accessed quickly in the scene changes. In hindsight, the set’s practicality and blunt, Brutalist design go together quite well!

Hannah and I agreed very early on that the design needed to be grounded in truth, but one tiny step removed from reality, as some of the play’s themes and scenes are very much heightened in this regard. All props used in the play are rendered in the same concrete and green mould as the set, while the costumes are all naturalistic, but with all labelling removed.