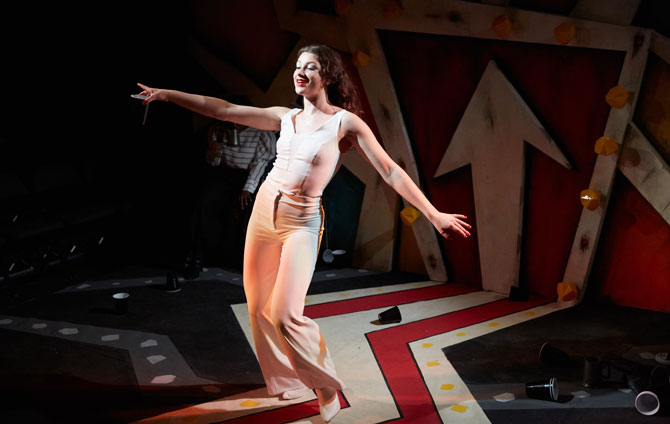 Designer Harry Lee talked to us about overcoming the challenges, and his inspirations for designing two of this year’s NEW:2019 plays, Between Eternity & Time, and Kasimir and Karoline: 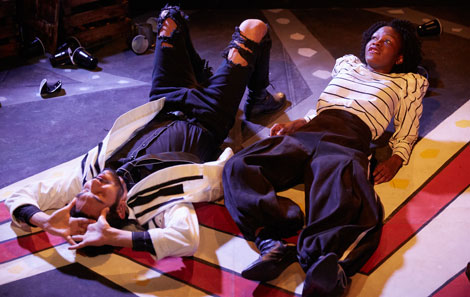 What was the Inspiration for the Design for this Play?

The play is based on the novel of the same name written in the 1930s, so the inspiration here was German expressionism: we wanted to avoid a naturalistic set – though here any connection to that period ends as we wanted to focus on the timeless personal themes of power, money and violence.

The 1920 film The Cabinet of Dr Caligari was a key influence from the beginning, both in its use of sharp, angular, disproportionate shapes, and in the colourful, fairground-esque colour palette of its posters. 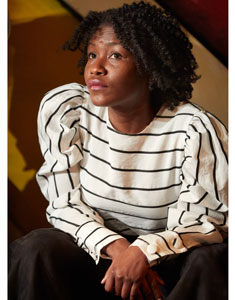 In stark contrast, the brilliant Bauhaus costumes, designed by Elle Lin, are almost entirely in black and white, a key collaboration decision made early on in the process, aiming to separate the flippancy of the fairground from the earnest nature of the characters.

How does the set reflect the play?

The set reflects the characters’ own loss of purpose and aimless existences; abstract, wonky and winding. There is a sense of heightened reality, an assault on the senses in the bright colours and fairground lights. 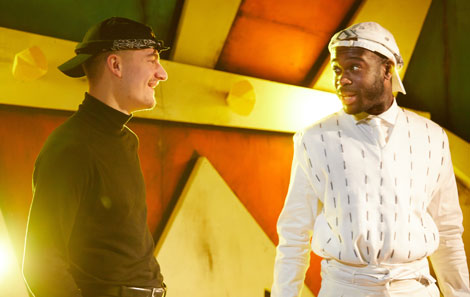 The stage is dominated by a giant, illuminated arrow, which runs across the floor and points up, up, up into the black night sky. The script is awash with visual metaphors for aspiration in a time of political, social, or economic uncertainty: the highs and lows of rollercoasters, zeppelins full of rich tycoons, bright starry skies full of cosmic constellations…

The characters are forever looking upwards and hoping, praying for something better; I wanted all this to be represented as much as possible in the set. 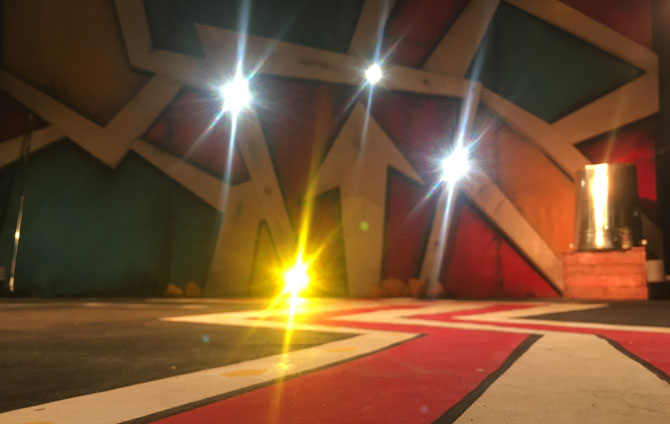 Light also plays a key role in this space, but not in the same way as in Between Eternity and Time.

Jagged, expressionist suggestions of fairground lights dot the spaces above the audience and actors alike, covering everyone in a Disney-fied illusion of starlight: tantalising, but ultimately false.

It’s a dark play, and the resilience of those who inhabit it, even in the face of inevitable failure, leaves the audience to decide whether life belongs to the optimist of the pessimist.

All other photos by Mark Douet

NEW:2019 – Designing for Between Eternity & Time