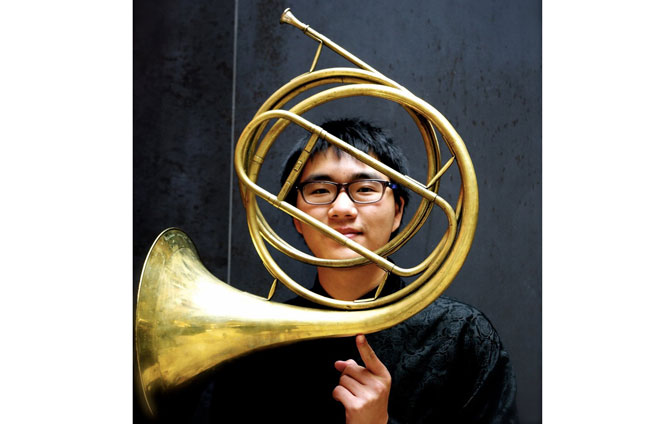 Postgraduate Horn student Isaac Shieh has entered the record books. Along with 401 other horn-playing colleagues, they formed the Largest French Horn Ensemble in the world, playing together in Ghent’s Cathedral Square at the International Horn Society’s 51st Symposium last week.

The conference is often called the largest annual gathering of horn players – and now it’s official, as confirmed by the Guinness Book of Records!

Isaac was also there as a finalist in the IHS Natural Horn competition.

Last year he performed as the soloist in the British Horn Society Festival, and became the first historical performer to win the College’s Concerto Competition.

Our Chamber Orchestra present ‘Into the Mists of Time’ tomorrow at 1.15pm. #RWCMD student Jasper Dommet’s prize-winning work Something in the Mist perfectly sets the scene for another #RWCMD star Isaac Shieh to perform Mozart’s iconic Third Concerto https://t.co/mIaY8oAWC0 pic.twitter.com/T0ToWZXc4Z

Originally from Hong Kong, Isaac has performed with orchestras around the world, and as well as period music, he performs a diverse repertoire, and is also passionate about rediscovering rarely performed works.

He also collaborates with international composers, regularly premiering new works, many of which are written for him. 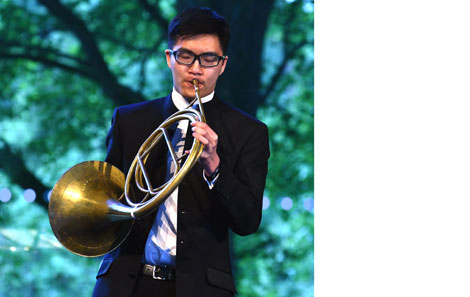 Isaac performing at the College’s President’s Dinner earlier this term.

Isaac’s training at the College has been supported by a scholarship from the Clive and Sylvia Richards Charity.

His tutor at Royal Welsh College, renowned period hornist Anneke Scott, joined the record breaking gathering, and also performed the opening recital of the two day Conference, launching her book on the natural horn. She was awarded the prestigious IHS Punto Award at the event in recognition of her work.

You can read more about Isaac here on his website: isaacshieh.com