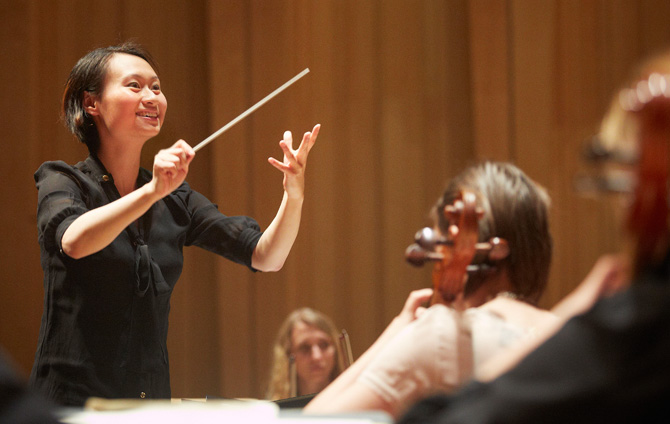 The post is part of WNO’s ambition to address the significant gender imbalance in senior roles in conducting.

Tianyi will be one of only eight women in senior conducting roles in the UK.

Looking for the perfect #SundayRead? Why not read about our first Female Conductor in Residence, Tianyi Lu, at https://t.co/VkSeMA0h74 #WNOfemaleconductor #WNOcarmen pic.twitter.com/zcWbVZXyIq

During the 18-month Residence scheme Tianyi will work closely with WNO Music Director Tomáš Hanus and the WNO Orchestra across a range of repertoire, including main scale opera, as well as youth and community projects.

She’ll be mentored by British conductor Alice Farnham, who is artistic director of the Women Conductors programme at the Royal Philharmonic Society, and a Guest Conductor at the College, recently conducting our summer opera, The Gondoliers.

It was during her training at RWCMD that Tianyi first made the connection with WNO, joining the Youth and Community team on WNO Youth Opera’s award-winning production Kommilitonen!

WNO Conductor Laureate, and RWCMD Hodge International Chair Maestro Carlo Rizzi, has described her as having ‘great musicality with a natural charisma on the podium.’

Tianyi, who was born in China and raised in New Zealand, studied in Auckland and Melbourne before completing a Masters in Orchestral Conducting at RWCMD in 2015.

Tianyi Lu: “The thought of conducting didn’t even cross my mind, because I had never seen a woman in a professional context conducting before…. Even the idea of calling yourself a female conductor is unusual -> https://t.co/d1difncNLb @WNOtweet

While at College she conducted in front of 1,500 children in venues across Wales as part of the its Orchestradventure project.

As a result of this exposure, she was invited to join top classical music agent KD Schmid for worldwide representation.

Tianyi begins her residency this August working on a new production of Carmen as well as observing preparatory work on Rigoletto and The Cunning Little Vixen.