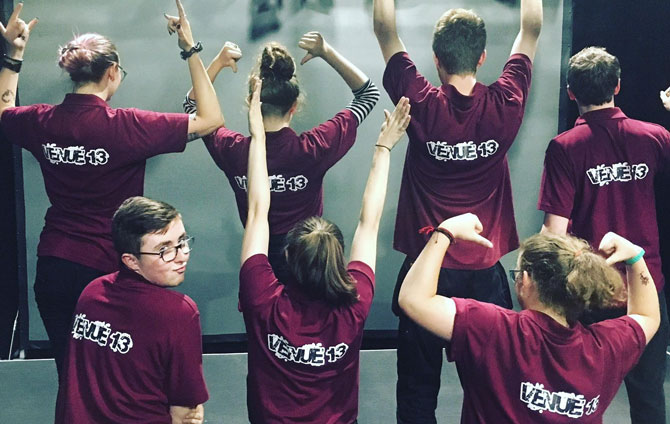 Once again RWCMD students past and present were making the most of the legendary Edinburgh Fringe, working both back and frontstage at the world’s largest arts festival.

Stage Management and Arts Management students were back running Venue 13, now in its 23rd year, welcoming over 1,500 audience members over its hectic three week residency.

Not long now! We kick off with our first 8 shows on Saturday! Make sure you pop down the Mile and see whats going on at #Venue13
There is something for everyone! #Edfringe
For more info and full listings check out our website
www. https://t.co/RBYvLD8HaF pic.twitter.com/jZT81vahtj

The 141 performances ranged from plays, a musical, dance, circus, to a multi media performance and spoken word, working with 61 performers from over seven countries including Canada, Belgium and Australia.

Walking down the street and happened upon the cast of Shreds singing! You should go see their show – I did and it’s good! #edfringe2019 #Shreds@unknowntheatre #Venue13 pic.twitter.com/d0yqeua54J

Ben’s post-apocalyptic show, which gained critical acclaim during its Fringe run, depicted the life of a former supermarket manager plunged into an unimaginable scenario of solitude and survival.

See what audiences are saying about Grit! And we didn’t even have to bribe anyone to write them for us!

Graduate Sophie Melville made a triumphant return to the festival, repeating her Stage Edinburgh Award win from 2015 for the hugely acclaimed Iphigenia in Splott. This year she won it, ‘recognising an outstanding performance at the Fringe,’ for her role in Charlotte Josephine’s play Pops, along with her co-star Nigel Barrett.

As well as producing fellow acting graduate Remy Beasley’s one woman show, Do Our Best, Francesca Moody brought two other plays to the Fringe: Square Go, and Richard Gadd’s Baby Reindeer, which also won a Fringe First, adding to Francesca’s long list of Fringe First awards, which started with her breakthrough production, Fleabag.

2019 was my 14th @edfringe. 8th producing. 2nd as Francesca Moody Productions. 3 Plays 🎭 26 incredible humans who made them a reality 🎪 4 co-producers who we couldn’t have done it without 👑 9281 audience members who dared to watch a show 👫 1 Fringe First to top it all off 🥇

Massive thanks to our awesome crew at @venue13 for making our week at #edfringe so great. The team have been so helpful, accommodating and professional all week and it felt great to sell out tonight for us and their hard work! #Adrift #Venue13 #pals #crew pic.twitter.com/8iq5MvUEpi