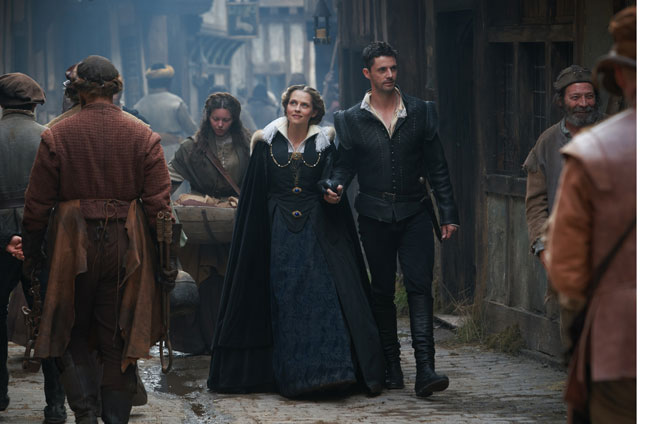 Design for Performance graduate and Fellow James North has been nominated for a BAFTA Cymru Award for Production Design for Discovery of Witches series one.

Last night we were honoured to attend the @BAFTACymru Nominees Party, where both James North and Juan Carlos Medina have been nominated for ‘Production Design’ and ‘Director: Fiction’ respectively for their work on @ADiscoveryOfWTV.#ADiscoveryofWitches#baftacymruawards pic.twitter.com/bcDb1XJg7T 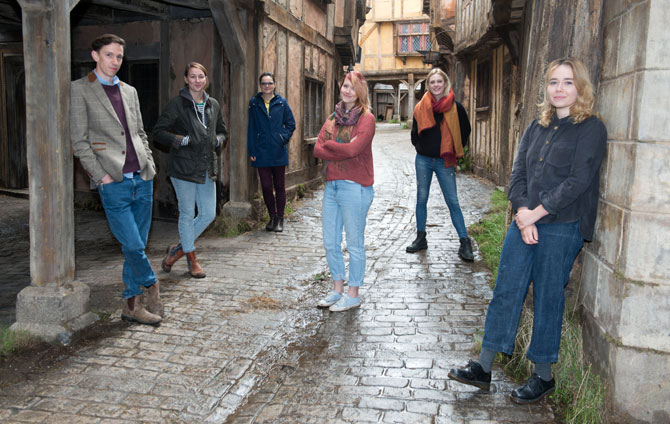 Based on the best-selling trilogy by Deborah Harkness, the Sky One fantasy drama is produced by the award-winning Cardiff-based production company Bad Wolf

James talks about bringing the sets on series one to life in this article in Entertainment Weekly.

The second series finds Matthew and Diana transported back in time to Elizabethan England. As production designer, it’s James’ job (assisted by a team of RWCMD grads) to create the world inhabited by the characters.

When the clapperboards are this gorgeous, you can imagine what the rest of the show looks like. #behindthescenes with @ADiscoveryOfWTV #ADOWS2 pic.twitter.com/Guisuxw9o1

Previously James was the Supervising Art Director on the first series of His Dark Materials, starring Dafne Keen, Ruth Wilson, James McAvoy and Lin-Manuel Miranda among many others.

That fantasy adventure epic is also produced by Bad Wolf in Cardiff, and premieres on BBC One this November. 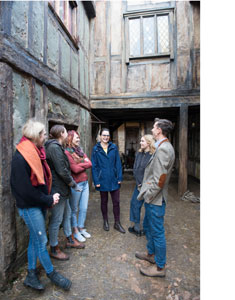 So why does James employ so many Royal Welsh College graduates in both Design for Performance, and Stage Management and Technical Theatre?

“We don’t just need designers, we need people with a grounding in the overall practise, with great practical experience and technical ability to sit anywhere within a TV art department.

The great thing about RWCMD graduates is that they have such a great work ethic, and a robust all-rounded skills base. This means they can hit the ground running once they join us.

Because the graduates have worked on rep with the College’s Richard Burton Company, they have loads of practical experiences across the board, not just in design but in construction and model making, for example.

Even though this work might be in the theatre, these are all transferable skills for television, as well as the fact that students have placements in television throughout their course.“

James has worked his way through most of the major television series of the last decade, started as an assistant Art Director, and then Associate Designer on Doctor Who, by way of Torchwood, Line of Duty and Da Vinci’s Demons, before moving into Production Design.

THE MAGIC IS REAL: Well, virtually. Join us at London Waterloo 14-16 September to celebrate the launch of @ADiscoveryOfWTV by stepping inside the Bodleian Library c/o #SkyVR. #ADiscoveryOfWitches pic.twitter.com/1WlBG2b7mL 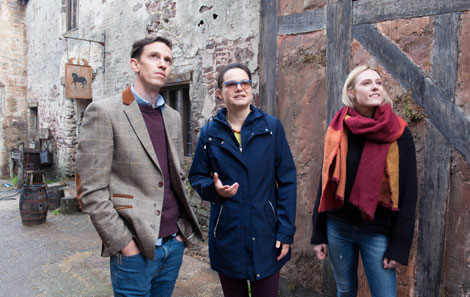 Graduate Zsofia Ekler, pictured above middle with Art Dept Assistant Rosalind Mather, did an Architecture and Engineering degree before coming to RWCMD to study an MA in Design for Performance. Through James, she got her first TV job on Da Vinci’s Demons as an assistant draughtperson. Since then she’s worked on various productions in Wales in draughting and set design roles.

Zsofia designed the set for the Elizabethan version of London’s Blackfriars.

“With such a thriving TV industry within Wales, my lecturer encouraged me to focus on that instead.

I did two external TV placements while at College, one with a Welsh based location company that specializes in TV, film and events, and found I loved working in the locations department.

So the rest of my course became focused on pursuing a career in TV. I got a job, just before graduating, with my last placement company.”

Find out more about James at Jamesnorthdesign.com

and you can learn more about the Design for Performance course here:

Bad Wolf supports a scholarship at RWCMD and next term will be sponsoring the College’s Richard Burton Company.

RWCMD’s Adventures with The Doctor

“The best course for theatre design in the country!”