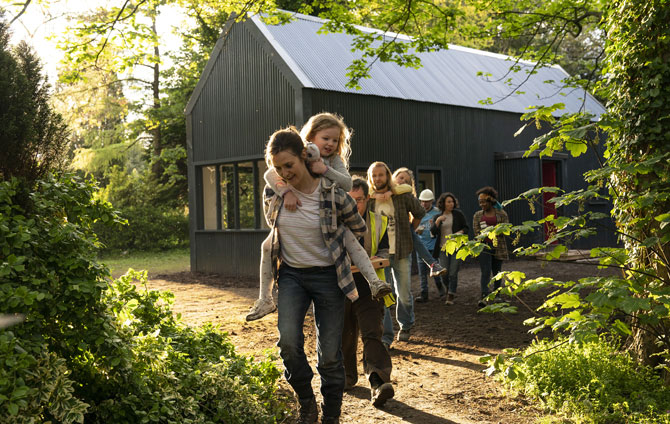 Congratulations to acting grad and writer Clare Dunne whose debut film has just premieried at the legendary Sundance Film Festival this week.

We just premiered Herself at Sundance. The most wonderful response. Clare Dunne walked up on stage to a standing ovation. So unbelievably proud of her and Phyllida and the whole team. I’ve cried and laughed at many points along the way of making this film. And I cried again tonight watching the crowd stand for Clare. @hellomerman @elementdistribution @clare.dunnebear @variety

Clare walked out to a standing ovation at the premiere of Herself, which she co-wrote and stars in.

Co-producer Sharon Horgan has said that Clare’s performance ‘floors me every time I watch.’

A contemporary drama set in Dublin during its current housing crisis, her film is co-developed by award-winning actor, writer, producer and director Sharon Horgan’s company Merman, and Element Pictures.

Director Phyllida Lloyd, who has previously worked with Clare on her acclaimed all-female Shakespeare Trilogy at the Donmar Theatre, joined the project on the condition that Clare played the leading role.

So happy to be doing this. Making stories with people you’re mad about. https://t.co/zJBWD9jOk4

Also starring in the film are fellow Shakespearian Trilogy actor Harriet Walter, and Conleth Hill among others, including some of Clare’s best friends in smaller roles. 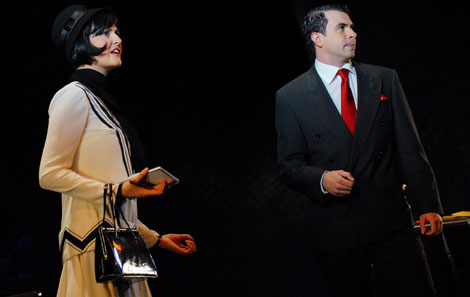 Clare describes her time at Royal Welsh College as ‘life-changing.’

Among other things, she credits the College’s End of Year Assessments (EYA’s) with giving her the first experience of writing and taking something from page to stage.

At the end of first and second year the EYA’s give acting students the opportunity to create, direct and produce their own 30 minute performance, working with student stage managers, technicians and designers.

“I’m not sure I’d have tried writing so early in my career if the College hadn’t opened my writing brain. EYA’s were one of the very best things about College, along with the writers and mentors they brought in,” she said.

“It gives you a chance to create your own thing: a brief to create anything you think possible on a stage, collaborating with everyone because they’re all there studying at the same place.” 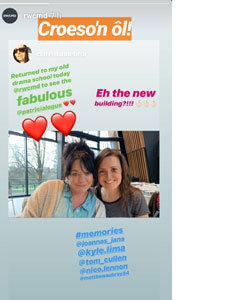 Journeying right to the end of a full, technically completed production – It’s one of the most scary and exiting things in the world.

But it’s so beneficial for your creative mind: to be open to other things and to find the confidence in yourself  as well as other aspects to your artistry.
It makes you ask yourself what you care about in storytelling.”

After leaving College Clare used the money she won from her BA Acting Award to develop her 2nd year EYA into a production she put on in a Dublin venue. 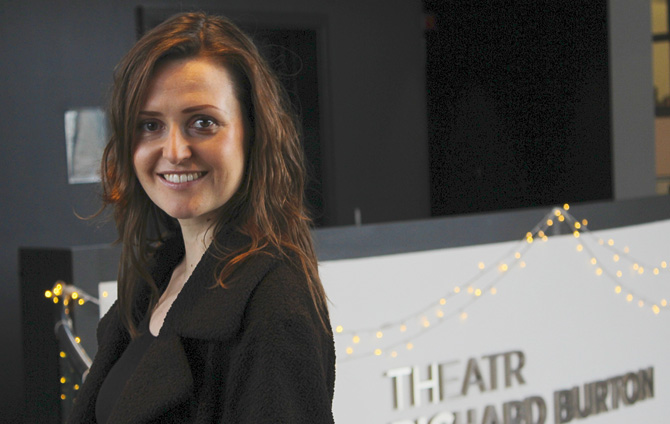 Clare came back to see the new College buildings at Christmas

“That experience taught me a lot artistically –  I learned about film and editing because it involved a music video. All these seeds grew as I got on with my career…

“College was a unique thing. It wasn’t about breaking people down, but expanding them, training us to search for who we are, what makes us tick – and giving us longevity as performers and creators.

At College they’re interested in you long term, and they know there’ll be challenges for you, not just as an actor, but also as an artist, and a human.”

“Some of the practical stuff you learn here certainly saves your arse when you’re wrecked from long hours of work, and you need to keep your voice alive or keep your body in tact.
There are voice technique training tricks I was taught then, that I still do every time I do theatre gigs” 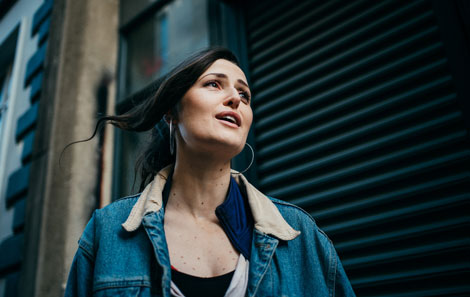 Clare’s recent one woman show, ‘Sure Look It, Fuck It’, Photo:This Pop Baby

She went straight from College to play the female lead in Playboy of the Western World in the acclaimed production by Galway’s Druid theatre company. She got the role after being seen by the casting director as the lead in the College production of Thoroughly Modern Mille.

“Pegeen was my dream role, with my dream theatre, and I did it straight away, during my final year of college. I was lucky, but I knew it.

It was the six months of no work straight after that was the real making of me. That’s when I put my own EYA into full production. And that’s what I mean about Royal Welsh College: They’re getting you ready for the highs and the lows!” she says.

Among her many stage roles Clare’s has recently created and performed in her one-woman show, Sure Look It, Fuck It.

Herself has its European premiere at Dublin International Film Festival on March 8th, and will then be released in UK and Ireland later this year.

Find out more about our Acting courses here.

Herself is co-written with Malcolm Campbell and produced by Academy Award nominee Ed Guiney and Rory Gilmartin for Element, together with Sharon Horgan’s Merman production company.

The film was developed with BBC Films and Screen Ireland and production was backed by Screen Ireland, BBC Films, and the BFI (with National Lottery funding).