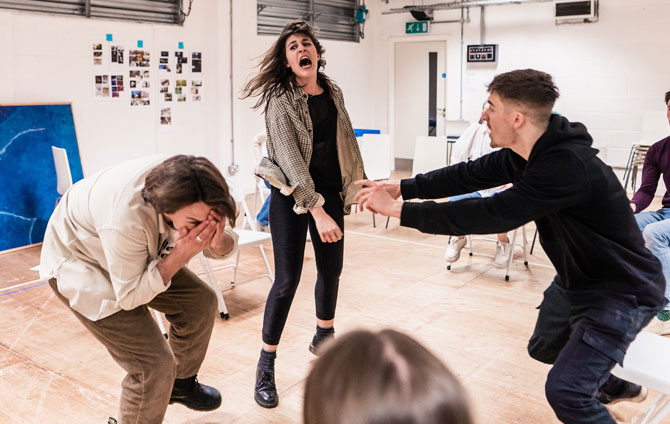 Although it’s that NEW time of year, sadly for all the obvious reasons, we aren’t able to put on the productions for our audiences this year.

When we told the students last week that the shows they’d all worked so hard for would be cancelled, they rallied together, like the amazing creative team-players they are, and put on an impromptu mini-festival to share the plays with as many friends and colleagues as safely possible.

Never felt more proud to be a @RWCMD student today. Our season of shows has had to cancel because of bloody Covid-Eileen so we’ve all huddled together to watch each others dress rehearsals. My year are a beautiful bunch of humans. The love is real folks.

We still want to celebrate NEW:2020 too so here goes:

Our annual NEW writing festival brings the College’s Richard Burton Company together with four emerging writers, and some of the most exciting directors in the UK to present four brand-new plays.

So what do we love about NEW, and why are we so sorry you’ve missed it!?

Since the College launched its flagship NEW seven years ago, we’ve produced no less than 28 new, challenging, provocative ambitious plays for the NEW season alone.  NEW gives audiences the chance to see something that’s never been seen before, leaving you thinking about current issues in a different way.

“The College has also been a creative force, commissioning new work in both English and Welsh for the last 15 years, and we’re proud of making such an important contribution to the industry the students are about to enter,” said Director of Performance Dave Bond. 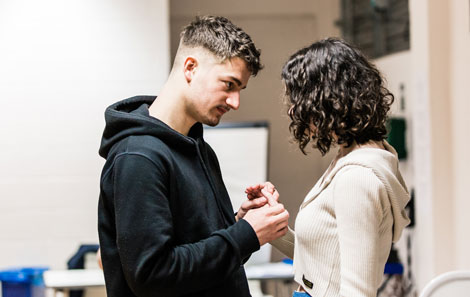 Key to everything the College does, collaboration and partnership are central to the ongoing success of this unique festival.

Dave Bond again: “The NEW season has become woven into the fabric of what we strive to be as a College,”

“It empowers our student actors, technicians and designers as creatives, nurturing their agency for their future careers.”

The rehearsal room becomes a collaborative space where the actors and designers feed into the creative process, working with the writers and directors to create the final play. 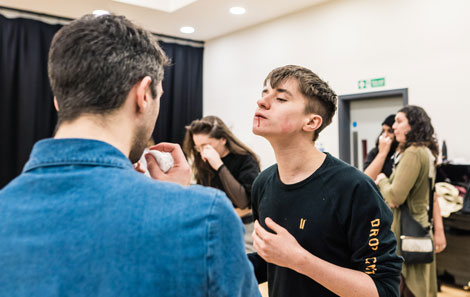 As director of After Rhinoceros: The Red Pill, Debbie Hannan says, “The actors have fed into the play hugely, it went on a massive journey in rehearsal: This year’s group are articulate and very politically astute. They’re real dramaturgical thinkers and storytellers. That’s part of what’s encouraged at this College, as well as technique, there’s the strong focus on knowing yourself as an artist.“

We also collaborate with our partners, theatres at the forefront of championing new writing. Long-term collaborators Paines Plough, Royal Court Theatre, Sherman Theatre, and the Gate Theatre, work with us to find some of the most exciting established and emerging playwrights and brilliant directors around to come and create with our students. 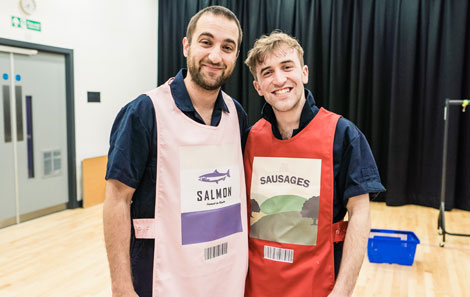 Rehearsal of Half Full

3. Catch the Creatives of Tomorrow

It’s hard to miss our talented grads out there in the industry, whether it’s the plethora of designers and stage managers on His Dark Materials (30 at the last count), or the actors that appear on your film and TV screens, and on stages across the world. While we’re all binge-watching at the moment, you may well discover Thalissa Teixeira in BBC 2’s Trigonometry, see Anthony Boyle in HBO’s new David Simon series, The Plot Against America, or be trying to work out who isn’t the RWCMD grad in S4C’s gripping thriller Bang…

From the many talented actors featuring in this year’s NEW, for example, Callum Scott Howells, has already spent the autumn term filming as one of the leads in Russell T Davies’ Boys, to be screened on C4 later this year.

Straight after finishing NEW he was due to join fellow final year actor Garyn Williams at the National Theatre in our summer term. Callum was slated to play Romeo in Gary Owen’s Romeo and Julie, directed by Rachel O’Riordan, and Garyn to perform in The Corn is Green with Nicola Walker, directed by Dominic Cooke. Fingers crossed this can be rescheduled.

After Rhinoceros: The Red Pill

NEW does what it says on the tin. Because it’s brand new writing it can react to bang up-to-the-minute issues. These can often be challenging and provocative, while often embracing the funny, and occasionally the surreal. 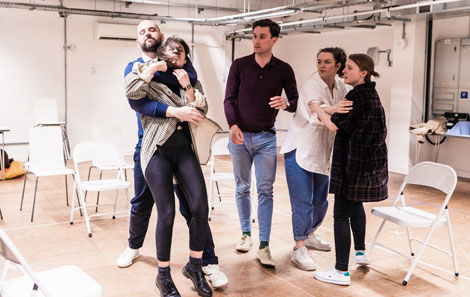 This year’s batch of new plays is no different. (we would have suggested you check out this year’s The Red Pill: After the Rhinoceros for a sample of the surreal!) dissecting the modern world, how it’s breaking, but how it might be put back together again.

Here’s director Matthew Holmquist talking about the process of creating Ripples: “I think Tracy (the writer) said to me when we started this process that she feels that we’re living in a broken world right now which I 100% agree with. The play stemmed from that because we wanted to explore how  we as a society learn to live in what we perceive as a broken world.”|

(Under normal circumstances) You can see the debut performances here at College first! The NEW productions all have their premieres in Cardiff before heading off to The Gate Theatre for its London residency.

Often the plays go on to have other lives after the festival:  Alistair McDowall’s Pomona, directed by Ned Bennett, in partnership with Royal Court, went on to be performed at the Orange Tree before heading to the Royal Exchange and the National Theatre.

What a bonus this would have been!? Did we mention there are rhinos aplenty (in After Rhinoceros: The Red Pill – the clue is in the title), and as if that wasn’t enough, we also have humans being animals in Moon Licks?! 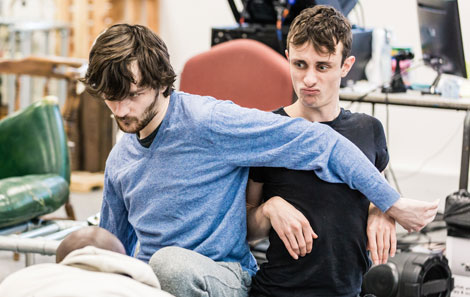 Find out more about this year’s plays here:

After Rhinoceros: The Red Pill

By Nessah Muthy, Adapted from RHINOCEROS by Eugene IonescoDirected by Debbie Hannan (below), in collaboration with the Gate Theatre

Drifting student Nicky is at loss, what even is truth anymore? Nothing feels real – except, maybe that Rhinoceros!?

Written by Tracy Harris
Directed by Matthew Holmquist (below), in collaboration with Sherman Theatre

In a group rehab centre in Bridgend, eight people are forced together to confront, relive and replay the traumas of their past.

Written by Charlotte Josephine, Directed by Hannah Hauer-King (below), in collaboration with Paines Plough

Animal humans or human animals? Did we forget mother nature’s in charge?

Half Full by Yasmin Joseph

Directed by Milli Bhatia, in collaboration with Royal Court Theatre

A world that crumbles, cracks and oozes with our many experiences. Supermarket shelves are coming to life, the testimonies of their produce urging to be heard. Tables across the nation, buckling under the pressure of our shrinking spaces to commune. We explore the power of food, its ability to draw us together and how what we consume impacts our humanity.

Find out more about our final year actors here.

And go to our website to find out more about our Acting, Stage Management and Design for Performance courses.

NEW 2020 is supported by Sean Mathias and the Spielman Charitable Trust.