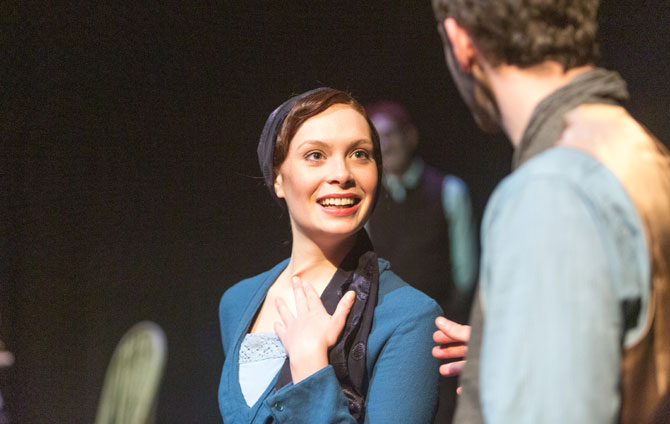 Actor and writer Grace Quigley, who graduated last year, has set up an online theatre company aimed at bringing creatives together and encouraging connection at this time when so many people are feeling alone.

Petronilla Theatre company is inspired by Grace’s network of fellow RWCMD grads. “I found my mates and I were going to see something created by or involving grads nearly every week!”

The amazingly talented @Grace__Quigley has set up a theatre a company @PetronillaMidia and held her first play reading last night which I was honoured to be a part of! She’s going to go on to kill it! Follow, follow follow @PetronillaMidia @PetronillaMidia pic.twitter.com/b1PKV7AQ8V

The Company has reading and feedback sessions for new writing every Thursday, most recently including a TV pilot written by a RWCMD grad.

Tell us about Petronilla Theatre Co and why you set it up:

I’ve wanted to start something like this for a little while since graduating.

I’ve had to take a slightly ‘think outside the box’ approach. I’d taken part in a writing workshop on zoom and it worked very well, so I thought this could be a way of running the workshops and readings I had in mind.

I initially wanted to start the company to run nights similar to the student-run ‘Writers Corner’ which we had at College, as well as readings and a space to develop and challenge new writing.

Petronilla Theatre particularly encourages women and people from the queer community, but I’m very keen to run specific schemes and am currently working on two which encourage Irish and working-class voices.

Massive thank you to everyone involved in our play reading last night. Had such a fabulous time! #theatre #workshop #zoom #isolation #creative pic.twitter.com/45rl7oPsb4

A lot of young creatives don’t have much disposable income, particularly right now, so I wanted to run these workshops as cheaply as possible! As with everything at the moment we’ll take it as it comes. I’m open to all possibilities of keeping creative and connected through this slightly darker time, wherever we are isolating.

The College’s production of The Wolves. Photo: Kirsten McTernan

Tell us about your time at RWCMD.

It sounds simple but one of the main things that College focuses on is that you need to be a kind and generous person and actor, and to always stay creative.

This comes from both the College and our peers. Don’t wait for something to just ‘come along’, create your own stuff!

I would never have considered writing a radio play for example, or considered the amazing voice work that’s out there. Among lots of other things, we had really great radio training and got to work with some wicked producers in our second year.

Did your training at College help you to be a writer?

Yes! At College we all have to write EYA’s.

(At the end of the first and second year the End of Year Assessments give acting students the opportunity to create, direct and produce their own 30 minute performance, working with student stage managers, technicians and designers.)

These end up forming what is almost a mini fringe festival. Mine really sparked a love for writing, even though it wasn’t my finest work!
I’d never written anything before, and although I was a little stubborn about it at first, by second year EYA’s,  and with a little nudge from the highly supportive ‘Writer’s Corner,’ I absolutely loved it.

So many people in my year and throughout the drama department are incredible writers and they all inspire me. Like a few others, I ended up writing my showcase monologue which has opened up so many opportunities within the industry.

In the last term of our final year, the College organises masterclasses. My absolute favourite was with the BBC Writer’s Room. I use their website and resources nearly every day. 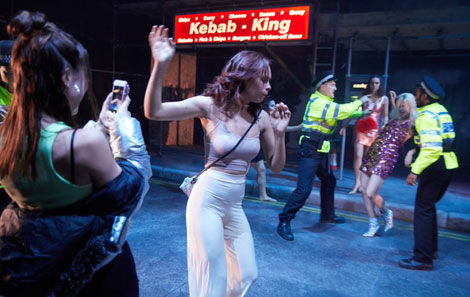 Grace in Simon Stephen’s Rage, a response to Brexit Britain.

How has life been since leaving RWCMD?

There is such a lovely, supportive network of grads. I’m now in London and have had so much fun at all the shows and events held by or involving RWCMD grads.

I really enjoy all the amazing things Siberian Lights, the female centric creative community do, for example. And I’ve recently have loved all the appearances from grads throughout The Vaults Festival, as well as so much more.

I’ve received the most unbelievable and heart-warming support from my fellow students across the year groups and am very grateful for this.

Fun fact from Grace: Petronilla De Midia was an Irish witch, who was maid to Alice Kytler. After Alice’s fourth husband died, she was also accused of being a witch. The two of them were burnt at the stake in Kilkenny in 1324!

Follow @PetronillaMidia on twitter to find out when the regular play readings take place – and follow #RWCMDCreative for up to date info on all our students and grads amazing online activity.