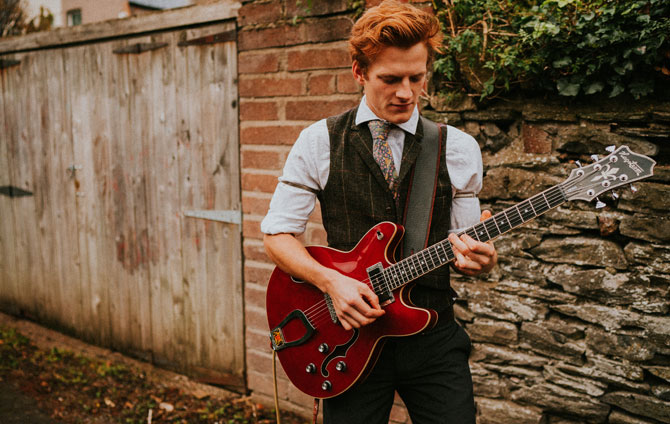 Composer Felix Lindsell-Hales is launching Bad Taste, his new album with his indie-ska band Year of the Dog on the opening night of the Atmospheres Festival as his final composition portfolio.

🥁 No drums in lockdown – grab an onion https://t.co/rO8z7YeUe1
How Cardiff-based swing group Year of the Dog recorded their EP pic.twitter.com/qCjycM8mGF 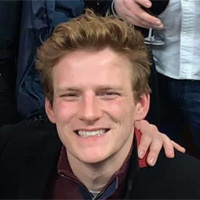 Here he talks about another recent project, creating music for the BASE jumping documentary – the recreational sport of jumping from fixed objects and using a parachute to descend safely to the ground.

The opening sequence from BASE jumping doc I scored, Adventure Together, following @tim_howell_adventure, directed by @george_morris_film. • That gushing air you hear is in fact myself breathing through my nose, miced very closely – you’ve got to work with what you’ve got. • Recorded in RWCMD Sony Studio • Director @george_morris_film Producer @paris.palmer.film • @edgesporttv #adventuretogether #basejumping #timhowell #rwcmd #documentary #wingsuit #royalmarinecommando

I must have been practically living in the College’s Sony Studio for a solid three months, working on Adventure Together. That studio, along with the unwavering technical (and sometimes emotional) support from the genius that is the College’s music technology lecturer, Odilon Macenaro, were my Bat-Mobile and my Lucius Fox.

Much like Batman, I worked into the night and adopted a low raspy voice from incessantly shouting Ha’s, Ho’s, Sha’s, and Ma’s into the microphone. These weren’t out of insanity, but because the score is extremely tribal influenced, featuring long vocal bass pedal drones harking upon conventions of Mongolian throat singing, because the film is set in Iceland; a prehistoric landscape of volcanic black rock blanketed by lush undulating green; an island plucked from an ancient world.

BASE jumping documentary I scored, following @tim_howell_adventure and his wife Eva across Iceland in search of the perfect jump, premieres Friday, 10th April at 8pm on @edgesporttv . Directed by the absolute gent @george_morris_film

It was a huge project. Much to my pleasure, the music pretty much fills the entire 30 minutes, but that’s a lot of music, not forgetting the number of edits, meaning at least ten variations on each track. I had not tackled a beast of this size before, though I had scored about fifteen short student films and adverts thanks to the partnership the Composition department has with Gloucester film school.

Other than the synthesized strings and female vocals, I play all instruments in the soundtrack. The female vocals are performed by Kirsten Evans, also a composer in my year, who managed to make my last-minute ideas for her parts seem meticulously planned.

“Not only was the idea of a BASE jumping documentary exciting, but the idea of collaborating with another student on an external project was something that meant we were trying our hand at projects in the real world,” said Kirsten.

“Felix made the process simple and easy. We ended up recording only a few takes with a range of ideas that he turned into the score. We tried out harmonies, melodies and lyrics until we found something that worked!

I really enjoyed having the chance to listen to the final track to see which ideas had stuck and which had developed since our resording session. It was great to finally see the show too!”

With the nature of constantly receiving edits and changes to scenes, it’s all very fast-paced so you need some stamina. However, what with juggling my College work, Year of the Dog (the indie-ska band I lead), and commercial commissions throughout my time at RWCMD, that level of work was not too unfamiliar.

That said, I can’t say I didn’t enjoy a single moment of it. Writing for documentary is quite simply my passion – bringing real stories to life. There’s a privilege in communicating emotions which can’t be described through vocabulary or imagery, and when there are two humans (in this case man and wife) jumping off a mountain cliff, barreling through the air at 120mph side by side using no machinery, the music writes itself.

It’s breathtaking in every sense, and so I produced the music to be soulful and rich. Nearly all BASE jumping and extreme sports programs are about ‘looking cool’, edited with pounding dance-club music, neglecting to show the raw determination and passion that’s needed to complete such a feat. The director, George Morris wanted to show this human aspect of BASE jumping, and I completely agreed. Hence, the score needed to feel human, natural.

The documentary aired on Edge Sport earlier this month,  just over a year and a half after we finished the final edit.

Felix debuts Bad Taste, the Year of the Dog album at the Atmospheres Festival on Friday 1 May. Listen in on

Atmospheres Radio and check out the Atmospheres 2020 blog for insights into the composers’ work.

Find out more about Felix at www.felixlindsell-hales.com

Year of the Dog in Netflix Hit Sex Education