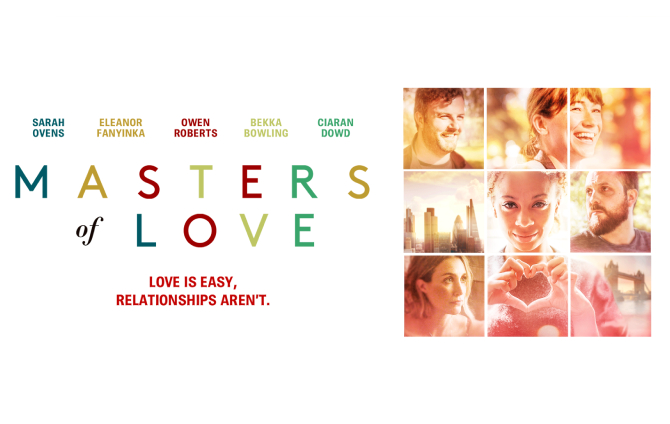 “My training at RWCMD is absolutely key to me still working in the industry today,” says acting grad and Masters of Love writer and director Matt Roberts.

His first feature-length film, featuring a cast full of fellow acting grads, is released in the UK and Ireland today.

Repost: @mattrobertsdirector This time last year we were getting ready for the World Premier of @mastersoflovemovie at @edfilmfest Such a brilliant weekend!! @ciarandowdcomedy @lovensov #owenroberts ~ Check out the trailer in bio

Masters of Love is ‘an original and darkly comic look at love in all its grubby glory’, writes the film’s official website, starring grads Sarah Ovens, Ciarán Dowd and Owen Roberts, above with Matt.

It made its world premiere at last year’s Edinburgh International Film Festival before playing at LOCO London Comedy Film Festival and the legendary Raindance Festival.

A special congrats to @hildamovie and @MastersofLoveM, both of which screened at #Raindance2019 last month

Matt’s College experience has stayed with him:

“My degree was in acting but the course is so much more than that.

“It teaches you to be an artist and create your own work. It forces you to examine the kind of work you want to make and helps you to understand the need to shape your own path in an incredibly competitive industry.

If it wasn’t for the end-of-year assignments where you have to write and perform your own work, I’m pretty sure I wouldn’t have gone on to set up Papatango, or gone on to make this feature film.”

MASTERS OF LOVE will be on Digital HD from July 13th, and it’s a rom-com with charming characters that tackles connection in the 21st Century!

His Truck Films shorts have made official selections at some of the world’s most prestigious film festivals including Palm Springs, and been nominated at the British Comedy Awards.

Our debut feature film ‘Masters of Love’ is playing in @raindancefilmfestival next Thursday (19th) & Friday (20th). Come. It’s good. Tickets in the bio.

“I think anyone’s first feature is a personal project. However I also got the opportunity to work with long term collaborators and friends and explore a subject a lot of us are currently living through – who are you supposed to be in your thirties? – so it truly felt like a personal project.

It’s very much an independent film but I do think it punches way above its small budget with some amazing performances from Sarah, Ciarán and Owen.”

The project is a series of firsts for many involved as stars Sarah, Ciarán and Owen all make their lead role feature film debuts.

Ciarán, Owen and Matt were all in the same year at College. Ciarán, who won 2018’s Edinburgh Comedy Awards’ Best Newcomer, and Owen have already been making comedy sketches as part of the critically acclaimed sketch group BEASTS for several years. Matt saw Sarah, who graduated a few years later, in a College production, thought she was brilliant and has worked with her several times since.

With grads Amy Downham and Lizzy Watts also in the cast, it’s a real showcase for our acting department.

Masters of Love is released today through all your usual platforms. Watch the trailer:

Find out more about acting courses at RWCMD.