Getting Back to Performance: A New Way of Working Together 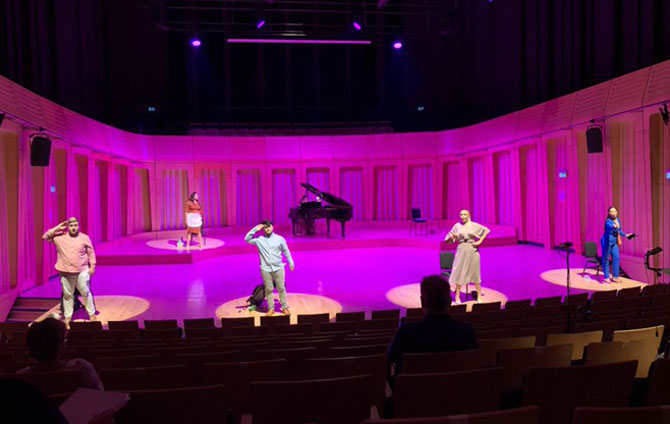 With no live performances or rehearsals together since we had to close in March, the College is now starting to come alive again, although under very strict restrictions, to the sound of live performance.

Working together with our stage managers, academic and estates staff, and students, it’s been a team effort to work out a way to adapt to this new world, making a safe, but creative space for students to come back to rehearse and perform. 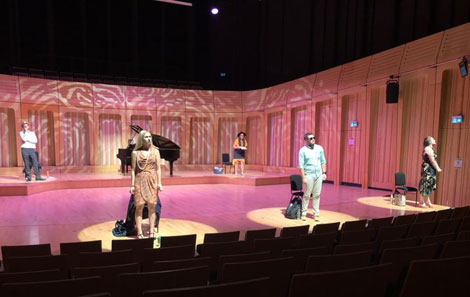 Although RWCMD is, for the moment, a very different space to the one we left, the creativity is back in force, taking these challenges and using them to stimulate and inspire new ways of approaching music performance.

Almost inconceivable that after a 6 month postponement, we came together and performed Così fan tutte. My final days as a student at @RWCMD were spent making music with other people. So thoroughly normal and utterly dreamy!!

‘It’s a deeply powerful and moving experience to hear music returning to our College,’ said Director of Music Tim Rhys-Evans.

‘I’m especially proud that as a conservatoire, we’re the first to be back delivering student-led performances as part of their professional studies, albeit in a socially-distanced way and to a limited number of academic staff and students in a socially distanced theatre.

Covid-19 has rocked the performance and creative community but it has also been a time when people have once again understood how vital music and the arts are.

I’m so proud to be part of an institution that has prioritised the importance of live performance for our students. I’m humbled and amazed by the way our emerging young professionals have taken a whole new way of working in their stride.’

Cosi Fan Tutte (main image), which was double cast, and Miss Havisham’s Wedding Night were originally planned for the end of the Spring term. So the students, many of them now graduates, had already spent time rehearsing them. 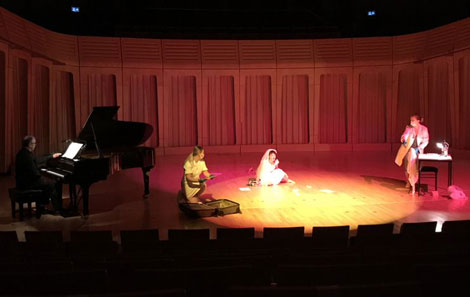 They were finally able to put on a limited performance to invited staff in the Dora Stoutzker Hall last week.

Our new musical theatre graduates will stage A Little Night Music, which would have been their finale production celebrating the end of their year studying the Musical Theatre MA.

Getting College Ready for the Return

As the College is among the first to come back and start rehearsals, it’s important we take the lead on emerging best practice for returning to a new kind of performance.

Working with medical advisers and other experts, as well as fellow arts institutions, we’ve created safe strategies, which are monitored and regularly adjusted to adapt in line with the changing situation. 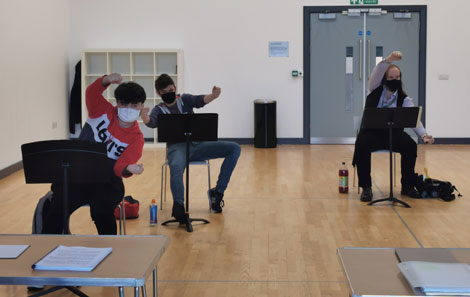 Opera students during a non-singing rehearsal.

Of course we now have the regular hand sanitizer points and the one-way systems –all of which we’re becoming used to in our everyday life. But inevitably coming back to rehearse and perform, particularly singing and playing musical instruments, includes a wider range of restrictions.

Production manager and graduate Rob Clarke has been overseeing the new rehearsal arrangements: ‘It’s of the utmost importance that the students and staff feel safe and confident coming into the building to work.

With singing performance comes strict conditions, over and above the usual 2m rule. There has to be 6m in front of singers and 3m to the side, which means additional restrictions on movement as that 6m space can’t be used for half an hour after singing.

More regular and longer breaks are then also required to allow the aerosol droplets to settle.’ 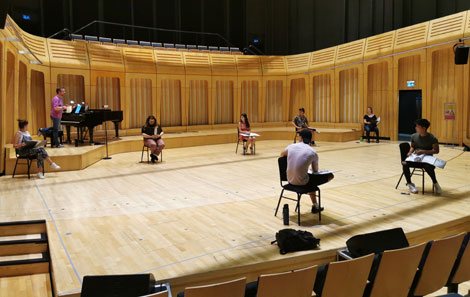 Among these measures: Everyone coming back into College, for whatever reason, has to undertake special training and have their temperature taken when they arrive. Masks are worn throughout the building, unless performing.

Before the students came back, the stage managers for each production had to work hard to make sure all the necessary restrictions were in place, and that instructions were clear and simple to follow.

But as stage management graduate and stage manager for L’Heure Espagnole, Ailsa Bonner said, ‘Knowing that the whole cast and creative team have all done the same training means there is a joint responsibility for following all the procedures, so it’s not all sitting on one individual’s shoulders.’ 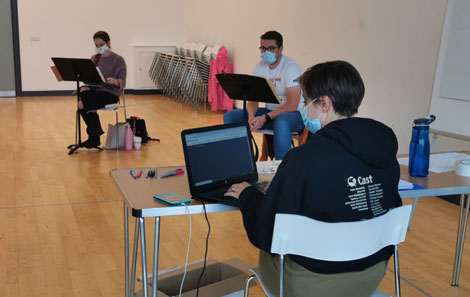 Everything is now on a much tighter timeline, given the limited time for rehearsals. Students learned their parts though zoom before the socially distanced rehearsals started, and there are next to no props and costumes.

The Joy of Performing

‘It is an incredible experience. To be honest before coming back I felt a bit nervous,’ said vocal performance student Michael Smith. ‘It was a bit strange having to fill in the questionnaire about safety, and interesting to see the new one-way routes and new ways for getting into College for rehearsals.

But it was really good to see the College taking it so seriously and thinking everything through so thoroughly, which has given me a lot of confidence to return to performing with my RWCMD Family.’

MA Opera Performance student Grace Curtis, who played Despina in Cosi agreed, ‘As a performer, what gets us through the tough slog of learning music, polishing languages and training our voices for hours a day, is the joy of performing as an ensemble. 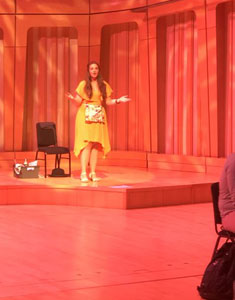 Grace in rehearsals for ‘Cosi ‘

Having been locked away for the best part of six months, with only our scores and families for comfort, getting the chance to return to this phenomenal piece was truly the most wonderful experience.

As most of the cast graduated this summer, and we all haven’t performed since lockdown, the entire process felt incredibly special, both in returning to College, our colleagues and in singing in a group.’

‘I’ve felt very safe during the process, the College has put so many protocols in place to ensure we are socially distancing and able to sing safely.’

Rehearsals began in the usual way with tablework. Only now instead of the cast and creatives sitting around the same table to discuss and explore the full text of the production, they’re sitting at the required distance from each other, at separate tables, with masks on when it’s a non-singing session. 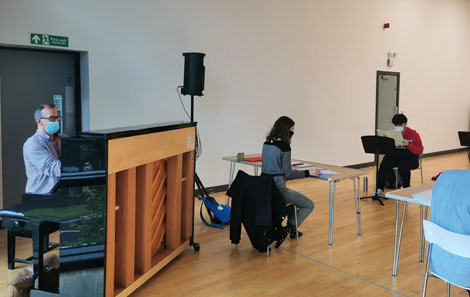 In singing rehearsals only three singers can be in this same rehearsal room at one time to ensure the correct space between them.

‘There are important restrictions in place and we’re working with them,’ said Hodge International Chair of Directing, Martin Constantine. ‘In some ways, it’s quite freeing.’

‘We’ve learned a lot from producing Cosi, our first ‘performance’ with these new restrictions,’ he said. ‘There have been challenges, but also many opportunities, in presenting within the spatial limits.’

‘We’ve taken that learning and we’re now making a production specifically made within this context. For example, singers aren’t able to sing towards each other unless they are at a safe distance, which has prompted some really interesting ways of interacting with each other.’ 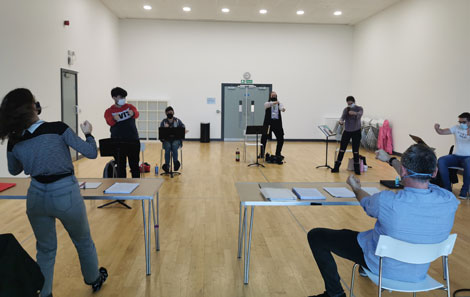 ‘We’re embracing a much more physical style, with a glance to German expressionism and a more formal physical language – focusing on telling the story with our whole body.’

‘We enjoyed the challenge of working with the new dynamic and seemed to adapt well. One of the dramatic tools we used was imagining an enormous mirror in front of us that we used to see the other members of the cast.

I certainly felt that this stimulated our creativity, challenging us to find dynamic ways to portray our thoughts clearly and synchronise the moves between people, such as making sure that we were taking props and hands that were offered to us.’ 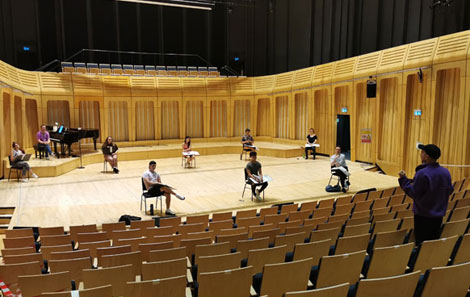 ‘We’d already programmed A Little Night Music which is bizarre as it’s probably the only musical that uses the word ‘quarantine’!

It’s also strangely apt because it’s about grabbing opportunities before they pass you by, embracing life and accepting the cycle that leads to death. It’s really resonating with us all, and added a real intensity to the performances.’

‘And it’s all about intimacy, which brings with it its own challenges at the moment.  Because of the challenges of movement with singing, we’re keeping everyone on stage and they have to move to the front of the stage when they’re singing. We’re having to rethink how we perform like this, and for it still to make sense within the production.

It’s such a complex, intricate piece. There are endless interpretations, and with this young cast, and their recent experiences, we’re finding so many new layers within it.’ 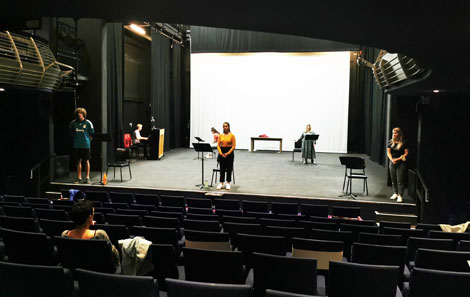 ‘I think we were all very emotional on the first day when James Southall started playing the first notes of Act 1 on the piano,’ said Annie.

‘Performing on stage with the rest of your cast is usually quite intimate and means quite a lot of contact because you have to interact to portray your character and create an experience for the audience.

This new way has enhanced my acting skills because you can’t interact with your colleagues in the same way we did before.

This forces you to adapt and become creative in building a character in isolation: you have to make that character’s portrayal believable in its own right so it continues to blend together in the overall performance with fellow cast members characters.

It’s also encouraged me to learn my notes a lot quicker than I would in a normal rehearsal process because with shorter more focused rehearsal periods, I want to make the most of that time so that I don’t impact other cast members. It has definitely made me learn quicker and practice more which has made me more inventive!’ 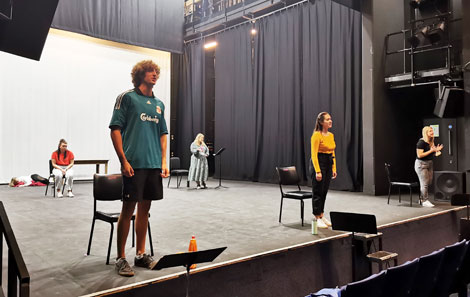 Annie, back left, rehearsing in the Richard Burton Theatre with fellow opera students

Grace speaks for everyone taking part in this new stage of the College’s training programme when she said:

‘We were all enormously grateful to have been invited back for this project and to finally get to sing the piece as a whole.

As one of us put it “During lockdown, I felt empty, but this has filled me with joy.”

A Little Night Music, L’Heure Espagnole, The Medium and The Telephone will be performed at the start of September to a limited number of academic staff and students observing the work in a socially distanced theatre.

Find out more about the David Seligman Opera School, and the Musical Theatre undergraduate and postgraduate courses.