Steinway Pianos: ‘The Rolls Royce of the Piano World’ 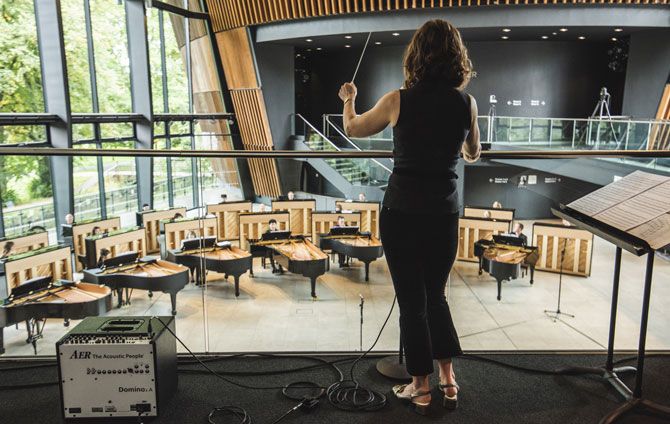 Having written a celebratory piece especially for the day, she had to work with 24 pianists playing 24 brand new Steinways, with only an hour’s rehearsal together before the performance, and conducting from the balcony.

You can see here how wonderfully it all worked out. We couldn’t share the performance with a live audience as we’d planned, but this film captures some of the joy of our College community coming together in a once-in-a-lifetime collaborative performance.

‘Steinways are the Rolls Royce of the piano world,’ said Julia. ‘They sound so rich and so responsive to play.’

I wanted 24 Pianos to be celebratory, reveling in the collaborative nature of the performance, and the magnificence of these new Steinways arriving in the Welsh capital.’

‘The piece incorporates fragments from the joyous Welsh folk song The Bells of Aberdovey, as well as influences of the music of Steve Riech and Shostakovich,’ she explained.

‘The music starts when a giant gong ‘wakes up’ all the pianos and starts them resonating and shimmering. One of our younger piano students then plays the first solo.’ 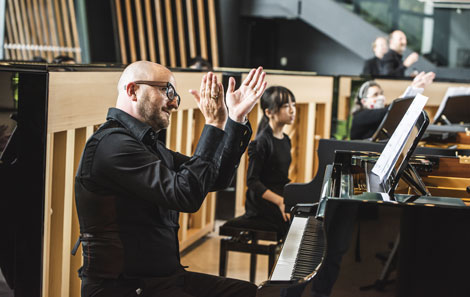 Director of Music Tim Rhys-Evans leading the applause for Julia

‘Gradually all 24 pianos join in creating a hypnotic soundscape. A chorale section that brings to mind a Welsh Male Voice choir leads into a tremulous cloudy section. Finally the clouds disperse to reveal a triumphant and monumental finale – like arriving at the top of Pen-y Fan.’

How did it feel to compose for 24 Steinways?

‘I feel very fortunate to be performing anything at this time, but to have such rich resources such as 24 Steinways, 24 highly capable and enthusiastic pianists, and a stunning architectural space with wonderful acoustics to conduct my own music was an extraordinary blessing,’ said Julia. 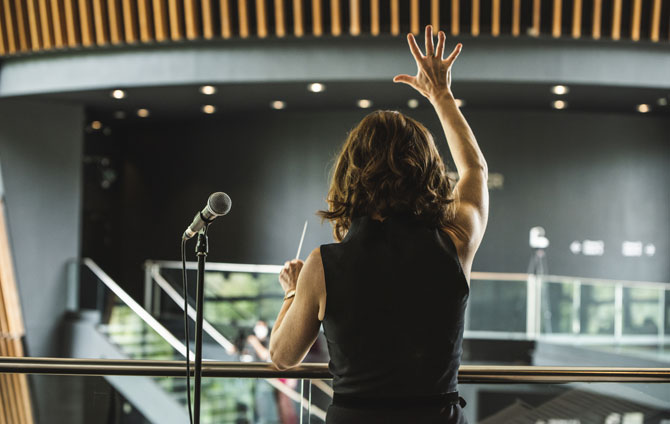 Julia conducting from the balcony in the Carne foyer

‘The Steinways simply bloomed in the space and whether it was the opening motiv played gently by one child or all 24 instruments joyously cascading through the whole range of the instruments, the sound was thrilling. One listener told me that the hairs on his arms were standing on end. One extraordinary unrepeatable day.’

What was it like playing one of the new Steinways, especially after lockdown?

Graduate, repetiteur, and Chorus Master at WNO David Doidge, is an old hand at playing on brand new Steinways as he was one of the students chosen to perform when Steinway delivered 62 new pianos to the College in 2009. 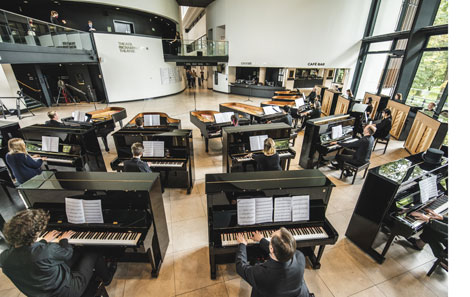 ‘I was so grateful to be a part of this historical and special event for the College back in 2009. To to be invited back to take part in this next stage of the College’s Steinway story is an honour I’ll never forget.’ 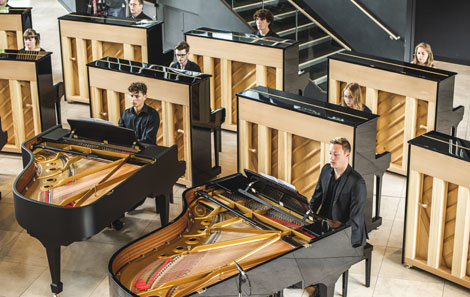 ‘This also happened to be my first gig back after lockdown, so that made it even more moving and enjoyable. I think RWCMD is truly deserving of the very best as they invest so much in their students.

This incredible hub of talent is one that I feel very proud to be a part of it now as a member of staff.’

For final year keyboard student Amy Reynolds it was an experience like no other: ‘I’ve played with orchestras before but never an ensemble of 24 pianos!’ she said.

‘I felt quite emotional when we first started rehearsing as it was my first performance in six months. To be able to play with other musicians again was just amazing.’ 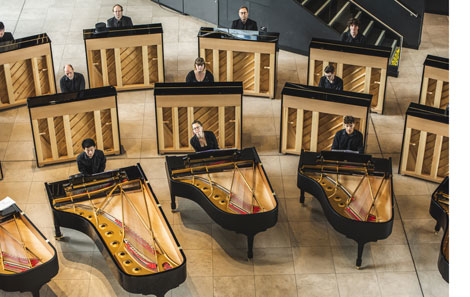 ‘It’s amazing that now all the pianos we play at College will be Steinways. I’ve even noted down the serial number of the piano I performed on so I can try and find it!

The Steinway Spirio’s will really revolutionise our learning, especially as we’ll now be doing a lot of remote learning this term. They’ll open a world of potential for us.’

Six of the pianists were from the College’s Junior Conservatoire:

‘The sound created by these instruments was very powerful yet very clear and the feeling of playing these pianos after only playing my upright at home for months was almost jarring because of how much better it was!’ 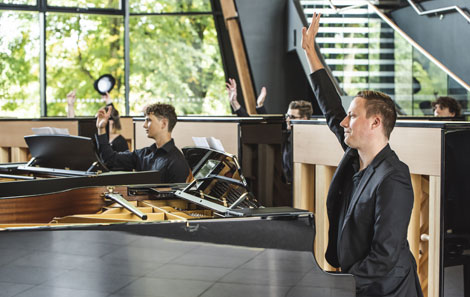 ‘I found the piece extremely fun to play, with its beautiful harmonies, interesting cross rhythms and dynamic variation between parts making for a soundworld that really shows off the versatility of these Steinways.

This performance has most certainly been a once in a lifetime experience and I couldn’t have asked for a better concert opportunity after so many months of being in lockdown.’ 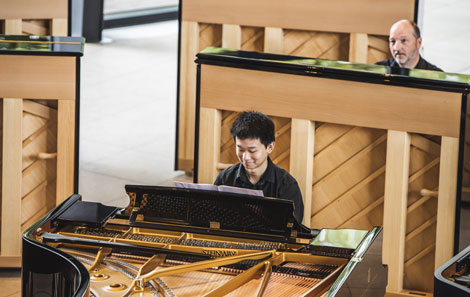 ‘Playing alongside all the other Steinway pianists was a real privilege.

I’ve been taught in the RWCMD piano workshop since I was seven, so playing as part of a team felt quite normal, but it was still a very memorable day, and now I want to own my own Steinway!’ 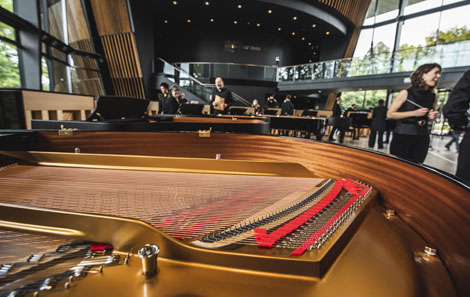 To find out more about the College’s Music and Keyboard courses, and its Junior Conservatoire go to www.rwcmd.ac.uk