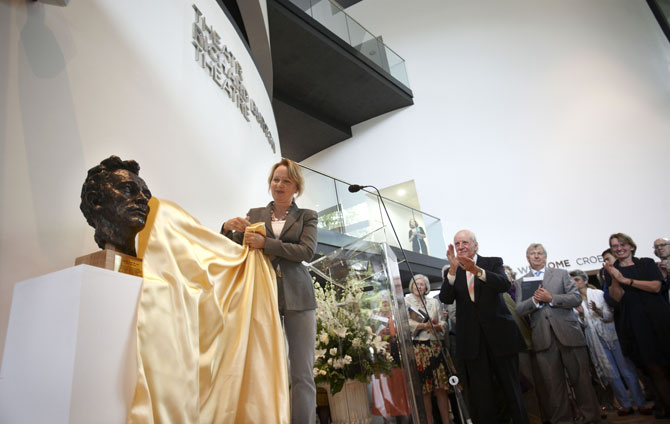 These are the buildings we have now come to know and love as the Dora Stoutzker Hall, the Richard Burton Theatre, the Carne Foyer and The Linbury Gallery – as well our new rehearsal spaces.

Opening day at RWCMD. Remember when we could have this many people in our lovely foyer?

Today the College launches a year of celebration with ten selected events over the course of the next year, showcasing all the College has achieved over the decade and signposting our ambition for the next ten years. There’s more info at the bottom of the page but look out for updates.

10 years later ,in what seems like a different world, I’m sat on the most recent addition to the building. pic.twitter.com/uOToMEhj3u

‘The College believes passionately in our sense of artistic community and our world-class new buildings have enabled us to welcome artists, audiences and students of all ages from around the world, uniting them in a shared and fundamental belief in making work of the highest quality, and in the value of the arts and artists,’ said Principal Helena Gaunt.

‘While celebrating our achievements over the last ten years we are also focused on looking forwards and enhancing the potential of future generations of diverse young artists who can become the change-makers and lead the power of the arts into the future.’ 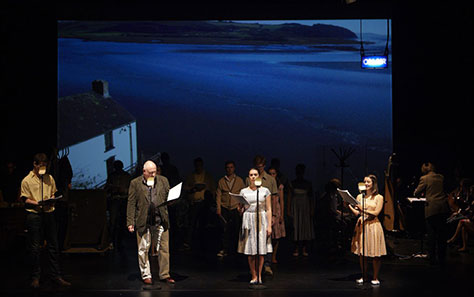 Jeremy Miles, the Minister for Education and Welsh Language, sent us a message saying:

‘Congratulations to the Royal Welsh College of Music & Drama on your 10th year in this iconic and eye-catching building, which has been a superb addition to the rich architecture of our capital city.’

The College provides a home for the wonderful array of talent who step through the doors of this internationally-recognised Welsh institution.’

Sir Ian Stoutzker gifted and named The Dora Stoutzker Hall in memory of his mother and it remains Wales’s only purpose-built chamber recital hall, used by students for their classes, rehearsals and performances as well as for masterclasses and performances from world-leading artists. 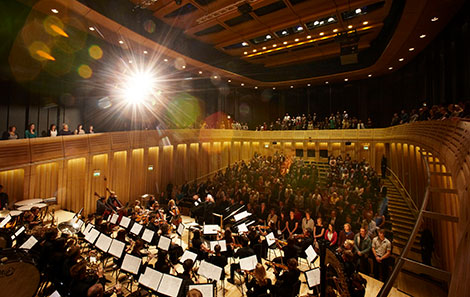 The opening concert in the Dora Stoutzker Hall

‘My mother Dora represents all the mothers of Wales who scraped and saved to give their children a music education.’ said Sir Ian. ‘She was born in Tredegar and was a young piano teacher in the town whose savings later gave me the gift of a musical education. She passed on to me both her love of music and of Wales.

The young students today refer to the Hall as ‘the Dora’ – my mother’s given name. I know she would have been so happy to see the pleasure it brings them today in their studies and aspirations.’

The bronze bust of Richard Burton, gifted to the College by Dame Elizabeth Taylor is displayed outside the new theatre named in his honour. Our unique rep company, The Richard Burton Company made up of postgraduate and final year undergraduate actors, stage managers, theatre designers and musical theatre performers, is the biggest producer of theatre in Wales, creating around 22 productions per year. 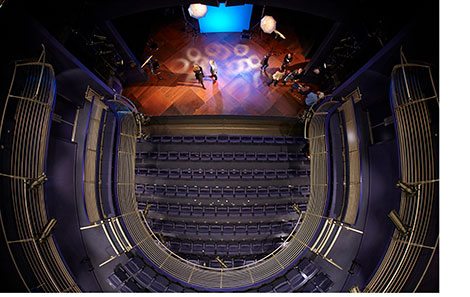 We’ll be presenting 10 events over the next year which celebrate the breadth of work and scale of ambition that the new buildings have brought to the College over the last decade:

• The Flying Bedroom: New children’s theatre production created by music, composition and puppetry students with performances and workshops in north Wales in July and September.
• AmserJazzTime: Showcasing the Carne Foyer as the location of Cardiff’s most popular jazz event, resuming on Friday 24 Sept and including special guest Dennis Rollins as part of his residency at the College on 22nd October.
• Celebrating the music of Errollyn Wallen: a focus on Errollyn’s work within student performances across the term, including a performance of Mighty River by RWCMD Symphony Orchestra on 4th November
• WNO Opera Gala: RWCMD’s annual concert in partnership with WNO the Dora Stoutzker concert hall conducted by Carlo Rizzi, featuring students from the David Seligman Opera School on 16th-17th November.
• A Song for Us: A song for Wales to be commissioned and performed across the country in Spring 2022 as part of a UK-wide project celebrating communities and the power of music to bring us together. ASongforUs.org
• Anthony & Kel Matsena: A collaboration between the Richard Burton Company and the Matsena brothers in a new production for the Spring 2022 season.
• NEW ‘22: RWCMD’s ground-breaking new writing festival, working with four writers and directors.
• Balance: Final year show for theDesign for Performance course, showcasing set, costume, puppetry and sound design, 15-22 June.
• Musical Theatre production: Celebrating RWCMD’s partnership with Sherman Theatre and the expansion of the Musical Theatre course to include undergraduate students from September.
• World Harp Congress: Bringing the world to Wales and celebrating the College’s Welsh identity in July 22

These projects will be presented either digitally or in person as per Welsh Government guidance at the time. Check out www.rwcmd.ac.uk during the year for updated info about all these amazing events.

You can read the full press release on our 10 Year Anniversary in our Press & Media Centre.

Curtain up on our new world-class facilities