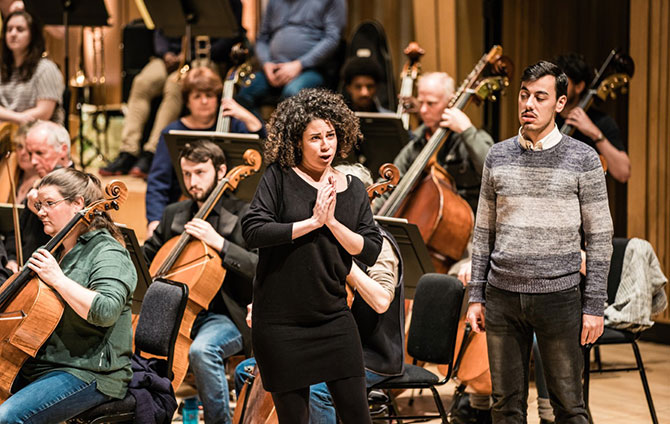 The £10,000 prize is awarded annually to the College’s most outstanding instrumentalist or singer and this year’s prize highlighted the exceptional vocalists studying at the College. 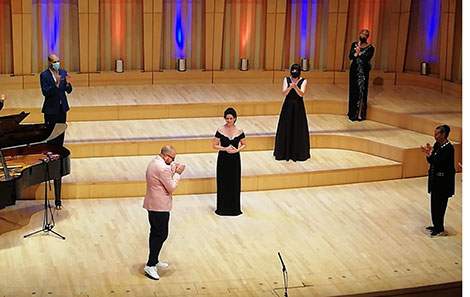 RWCMD Director of Music Tim Rhys-Evans, judge Roberta Alexander and the other finalists applaud Elena as the winner of the Stoutzker Prize

Despite not being able to welcome an audience, family and friends of the finalists were able to watch from all over the world as the event was live streamed for the first time.

And we were delighted that the Prize’s founder Sir Ian Stoutzker was able to join us from his home in Salzberg, especially as this week marks the 10th anniversary of the Dora Stoutzker Hall, generously gifted to the College by Sir Ian and named in honour of his music teacher mother, Dora.

It was a fabulous evening, a real pleasure to hear all four singers in a wonderfully varied programme, I feel hugely proud! And many, many congrats to Elena on a beautifully poised and polished performance – a worthy Stoutzker winner https://t.co/luBEX9XUXS

The prestigious panel of judges included Neal Davies and Roberta Alexander, both kindly giving up their only night off from judging BBC Cardiff Singer of the World, and Della Jones who joined the final via zoom.

‘It’s been an incredible privilege to hear live music and to hear such burgeoning talent after such a bleak and depressing 18 months,’ said Neal Davies. ‘We all look forward with great hope to a brighter and musical future.’

Prize winner Elena said, ‘I feel so grateful and thrilled to have received the Sir Ian Stoutzker Prize last Friday night. It was a complete astonishment for me and a true honour to be considered a worthy winner of this year’s competition.

This award certainly means a huge step in my career, both as an artist and as a person. I cannot think of a happier end to my time at College and for that I would like to thank again and again every teacher, coach and person that has helped and supported me since I started in RWCMD. It wouldn’t have been possible without you all… Gracias.’

Due to Covid restrictions the usual RWCMD Chamber Orchestra had to be replaced by pianist James Southall, who provided a magnificent alternative, acting as a one-man orchestra for the evening.

With many thanks to the Development department’s MA Arts Management placement student Tilly Scott for writing this blog.