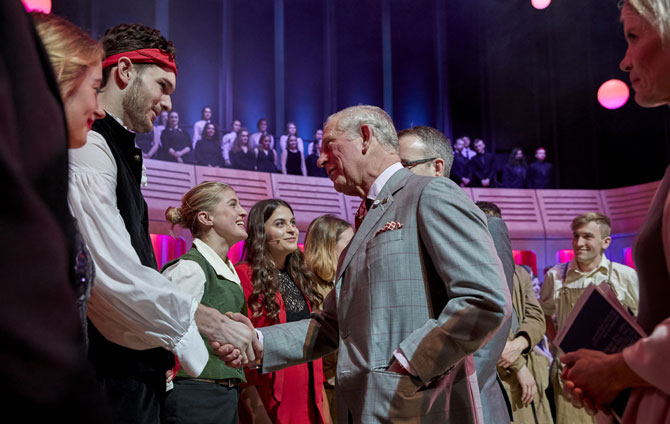 It was announced last night that the Royal Welsh College’s Patron, HRH The Prince of Wales, will become its President from July this year, joining a small group of organisations who share this honour.

Chair of RWCMD’s Board of Directors, John Derrick, said “We are so honoured and excited that His Royal Highness is developing his support of the College in this way and the news marks our 70th birthday in a very special way.

As our treasured Patron for the last 20 years, His Royal Highness has always taken an active and passionate interest in the progress of the College and its students and we are absolutely delighted that the relationship is deepening and will continue to grow.”

Principal, Professor Helena Gaunt, paid tribute to Lord Rowe-Beddoe, saying “When I first arrived here I was struck by the tangible impact that David has had, and continues to have, on this College.

He has been a visionary supporter of its advancement over many years. His support for our students is immeasurable. We very much look forward to working with him in his new role as the inaugural Chairman Laureate.”

His Royal Highness became the College’s Patron in 1999, prior to its royal status being granted in 2002. As an active Patron and supporter of the College, the Prince of Wales has hosted several Galas in the College’s name at Buckingham Palace. He also celebrated the final event of his own 70th birthday celebrations at the College in December last year.

The College commemorated these Birthday celebrations by announcing the renewal of the annual Prince of Wales Scholarships, which will be awarded from 2019 onwards from the College’s developing endowment, and the start of a partnership working with The Prince’s Trust.

Students from the College, including its Junior Conservatoire, perform regularly for His Royal Highness and his guests at Llwynywermod, his West Wales home.

He was close friends with fellow Welshman and actor Richard Burton, and was instrumental in creating the friendship and partnership with the Burton family that enabled the College to name its new theatre after the legendary Welsh actor.

As a result of this the College was also granted permission to give its resident company of final year actors, designers and stage managers the title of The Richard Burton Company.

In 2000 he received a knighthood for his services to industry and economic development in Wales and in 2006 he was elevated to the peerage.

Lord Rowe-Beddoe was a music scholar at both Llandaff Cathedral School and Stowe School before going to St John’s College Cambridge (after service in the Royal Navy) and Harvard University Business School..

His love of the theatre started in childhood (his mother was a professional opera singer and tutor at the College) and continued through university where he was recognised as an accomplished actor.

His illustrious career includes work with Thomas De La Rue, the world’s largest commercial security printer and papermaker where he became Chief Executive from 1971 to 1976. He moved on to become President, Latin America, Europe, Middle East and Africa with Revlon Inc from 1976 until 1981, and then President of Morgan Stanley-GFTA Ltd until 1991.

The Royal Welsh College of Music & Drama, the National Conservatoire of Wales, and part of the University of South Wales Group, competes alongside an international peer group of conservatoires and specialist arts colleges for the best students globally, enabling students to enter and influence the world of music, theatre and related professions.