Patrick King is New Head of Percussion at RWCMD 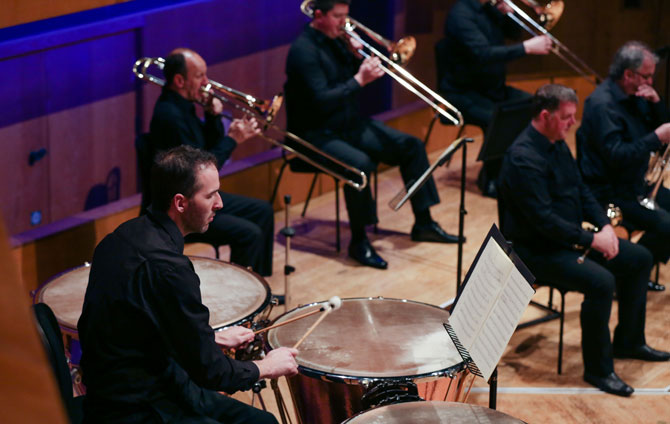 Patrick King has been appointed as the Royal Welsh College’s new Head of Percussion. Patrick, who is currently Principal Timpanist with Welsh National Opera, has been coordinating the department for the last two years.

“Patrick is a leading light in the percussion world,” said Kevin Price, Director of Music, “and his reputation as an exponent of his art in the concert hall, and in an educational environment, will enable him to guide the department and to support the future of our young musicians.”

He has been passionate about outreach work since he was a student, and sees percussion as the perfect way to engage young people in musical activity.

“As percussion is such an accessible instrument it makes the ideal starting point for creating music for beginners. I’m really looking forward to working with the already established outreach department here.

As the National Conservatoire of Wales, it makes sense for us to use the best ways we can to inspire and engage young people – particularly those who haven’t interacted with music in any way before.

I’m planning to develop our outreach even further so that students can work outside the College as ambassadors, learning how to share their knowledge, experience and enthusiasm to inspire young non-musicians and empowering them to do this themselves.”

Patrick has been running the Percussion course over the last few years, working with tutors such as Owen Gunnell from O Duo:

“One of the many things I love about this course here at RWCMD, is that it’s such a tight-knit community of both staff and students. The College has a real team spirit as a whole and everyone works together to create the best and most inspirational space in which to work.”

Employability is becoming an increasingly important element of music teaching as graduates follow different paths to the more traditional route of joining an orchestra.

“It’s important that we also take a fresh approach to employability: in our changing profession it’s important to recognise that training isn’t just about being in an orchestra. O Duo are a great example of the many faces of a modern career in percussion.“

Patrick will be leading The Big Bash on Saturday Feb 16th, one of a series of the College’s Instrument Days.

Patrick studied at the Royal College of Music (RCM) and on graduating received the Directors Prize for musical contribution. While at the RCM he was Principal Timpanist with the European Union Youth Orchestra, and then went on to a freelance career which involved playing with every major orchestra in the UK including the LSO, BBC Symphony Orchestra, Scottish Chamber Orchestra, BBC Concert Orchestra and The Royal Opera House.

He was percussion finalist in the BBC Young Musician of the Year in 2001, and winner of the LSO St Lukes Academy.