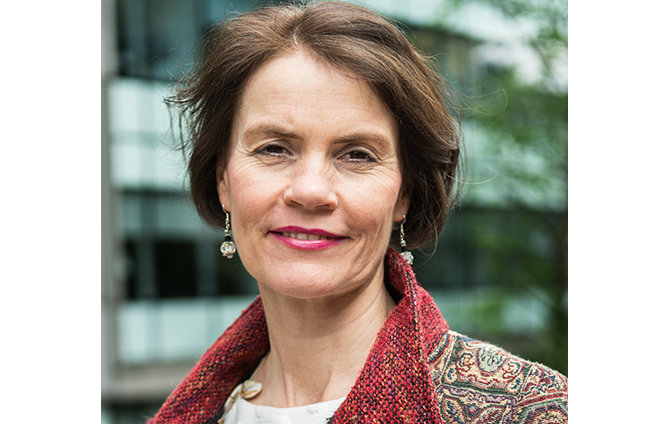 The Royal Welsh College of Music & Drama is delighted to announce that Professor Helena Gaunt, currently Vice Principal and Director of Innovation at the Guildhall School of Music & Drama, has been appointed as the College’s new Principal. She will take up the post from Interim Principal, Professor George Caird, on 1st September 2018.

In her most recent role at the Guildhall School of Music & Drama she has provided strategic leadership in academic and artistic development, research, enterprise and internationalisation. She has also led on the School’s external relations with key partners such as the Barbican Centre, and most recently the City of London’s Culture Mile, which also includes the London Symphony Orchestra and the Museum of London as core partners.

She has extensive professional experience as an oboist and member of the Britten Sinfonia, and as a conservatoire teacher and researcher. Among her other roles she is a Visiting Professor at the Sibelius Academy, University of the Arts, Finland, as well as being a National Teaching Fellow and Principal Fellow of the Higher Education Academy.

Announcing the appointment, John Derrick, Chair of the Board of Governors at the Royal Welsh College of Music & Drama, said:

“We are delighted to welcome Professor Gaunt to Cardiff and the appointment reinforces the position of the College as a leading European conservatoire. Her depth of experience across both music and drama combined with her strong international relationships will enhance our national and international aspirations.

Helena’s reputation and leadership will ensure that we continue to nurture and grow the stature of our offering for undergraduate and postgraduate students.”

“I am delighted to be joining the Royal Welsh College at this exciting time in its development. Already established as a world class institution in Wales with an outstanding performance programme and educational opportunities, the stage is set to deepen and extend the College’s impact both in Wales and internationally.

There is now an opportunity to further enhance the key role the College plays in the growth of the creative industries, helping to power artistic quality and cultural innovation, and widening access to creative education. I look forward to working with the Board of Directors, staff and students, and to being part of the national Conservatoire of Wales.”

Commenting on the appointment, Lord Dafydd Elis-Thomas, Minister for Culture, Tourism and Sport said:
“As the National Conservatoire of Wales, the College fulfils a key role in developing our finest young musicians and actors. It also plays an important role in supporting the structures for nurturing talent at a local level. I look forward to working with Professor Gaunt in furthering the College’s significant contribution to the cultural life of Wales.”

Nick Capaldi, Chief Executive at the Arts Council of Wales, said:
“We’re delighted to join in welcoming Professor Gaunt to Wales. The Royal Welsh College of Music & Drama is a thriving institution occupying a vital place in national cultural life. We look forward to working with Professor Gaunt as she builds on the existing achievements and success of the College.”

Professor Gaunt studied at the University of Cambridge, University of Essex, Guildhall School and Institute of Education, London University, and received an MBA at Ashridge Business School.

She has more recently developed research expertise, publishing on one-to-one tuition in conservatoires, orchestral musicians in the 21st century, creative music performance and collaborative learning. She was an Associate of the Centre for Musical Performance as Creative Practice (CMPCP), and a member of the research team for Creative Works London, both funded by the Arts and Humanities Research Council (AHRC). Current interests focus on the position and practices of artists in society, including creative entrepreneurship.

In 2013 she led the launch of Guildhall Creative Entrepreneurs in partnership with Cause4, an incubator dedicated to supporting sustainable business development in the performing arts.

She has served on several working groups for the European Association of Conservatoires (AEC), including chairing the Research Working Group of the Polifonia project, 2007-10. She is a member of the Peer Review College for the Arts and Humanities Research Council, and co-editor of Music Performance Research.

Professor Gaunt has been appointed following a worldwide search process overseen by Saxton Bampfylde. The selection process was led by the College’s Chair, John Derrick.

Julie Lydon, Vice Chancellor of the University of South Wales, said:
“I warmly welcome the appointment of Professor Helena Gaunt and look forward to working with her as she leads the College to fully realise its ambition as a world class institution while building on the strong track record of the College.”

David Blaney, Chief Executive of HEFCW, said:
“I warmly congratulate Professor Gaunt on her appointment, and wish her every success in leading the College over the coming years.”

Leonora Thomson, Managing Director of Welsh National Opera, said:
“We are thrilled to welcome Helena to Wales. She brings with her immense skills as a musician of distinction, as well as being a leading and proven innovator in the arts. We look forward to working with her to continue to build on the strong relationship between our two prestigious Welsh institutions.”

Dame Hilary Boulding, President of Trinity College, Oxford, and former Principal of the Royal Welsh College of Music & Drama, said:
“Helena brings a wealth of knowledge and experience of the international conservatoire sector. She cares passionately about the quality and nature of the training of young artists. In this new role leading Wales’ National Conservatoire she has so much to contribute and I look forward to the future development of this wonderful institution under her leadership.”

NOTES TO EDITORS
The Royal Welsh College of Music & Drama, the National Conservatoire of Wales, and part of the University of South Wales Group, operates within its international peer group of conservatoires and specialist arts colleges. It attracts young artists from around 30 countries to provide a constant flow of emerging talent into the music and theatre industries and related professions.

In 2017, the Royal Welsh College of Music & Drama was ranked No.1 in the Guardian University Guide’s subject tables for Drama – the third time it has taken the top spot in the past five years.

Following Dame Hilary Boulding’s appointment as President of Trinity College, Oxford in July 2017 the RWCMD Board announced George Caird as interim principal until the appointment of a permanent principal.

In August 2017, John Derrick was announced as Chair of RWCMD for a three-year term.