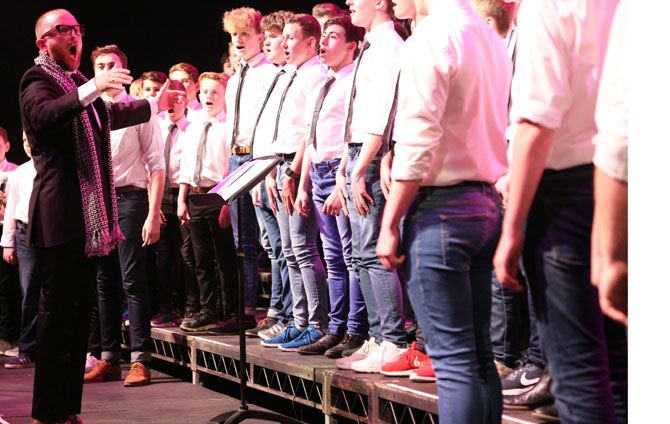 The Royal Welsh College of Music & Drama is delighted to announce that Tim Rhys-Evans MBE has been appointed as its new Director of Music. Tim will join the College in his new role in April.

Tim is best known as the founder and Artistic Director of The Aloud Charity, which runs Only Boys Aloud and Only Kids Aloud. He will continue his association by becoming the charity’s Patron. He’s also the creator of Only Men Aloud. 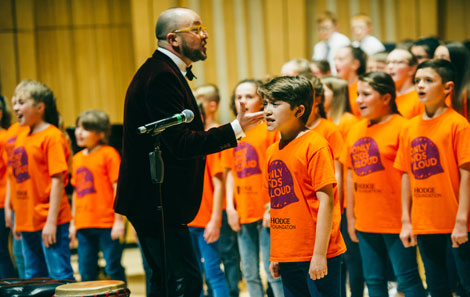 An MA graduate, former vocal studies tutor and Fellow of the College, Tim is a renowned musician who regularly works internationally as a choral conductor, vocal specialist, arranger, composer, adjudicator and presenter on TV and radio. 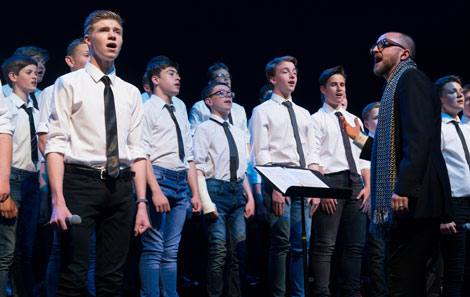 In 2013 he was awarded an MBE for services to music and for charitable services.

“I am absolutely delighted that Tim is taking on this role,” said Helena Gaunt, Principal of Royal Welsh College.

“He brings a combination of bold vision, outstanding artistic achievement and an international outlook. He also has a profound understanding of Wales’ musical traditions and a deep commitment to nurturing potential in each and every individual.

This experience will play particularly strongly into the College’s new, ambitious strategy to develop our work and impact across Wales and to provide transformative experiences for diverse communities.

Tim will bring fresh perspectives and inspiring energy to complement our existing expertise and we greatly look forward to working with him.”

Tim said, “I have a long association with the College, and I’m absolutely delighted to be assuming the role of Director of Music. Witnessing the college’s transformation in recent years has been a joy and I’m excited to be playing a part in the next phase of the College’s development.

Music and the performing arts are so central to us as a nation and I will be committed to ensuring that excellence is at the core of everything we do, enabling us to shine even more brightly on the world stage.”

Tim started Only Men Aloud in 2000, concerned about the male voice choir tradition dying out. He led them to victory, and international recognition, winning the BBC competition Last Choir Standing in 2008. Under his leadership Only Men Aloud has become one of the most innovative and dynamic organisations on the arts scene, winning a plethora of awards including a Classical Brit Award for Album of the Year, recording with the likes of Sir Bryn Terfel, and singing at the London 2012 Olympics Opening Ceremony.

Menna Richards, Chair of The Aloud Charity and Vice-President of The Royal Welsh College offered her warmest congratulations to Tim on his appointment, saying, “The Aloud Charity will be sad to see him go, but his legacy will live on through Only Boys Aloud and Only Kids Aloud.

Tim’s vision and ambition for Aloud have made a huge difference to the lives of so many young people and we are determined that the Charity will continue to change lives. I’m delighted that Tim will be continuing his association with Aloud by becoming the Charity’s Patron and look forward to building on the strong relationship that already exists between Aloud and the College.
All of us in Aloud wish Tim all the very best as he sets out on his new role.”

Tim’s belief in singing as a life-enhancing activity underpins everything that he does professionally. His pioneering work with OMA has been proof of this, carrying on the mantle of the Welsh Male Choir tradition and continuing its relevance to modern society.

He took this idea further with the creation of Only Boys Aloud and Only Kids Aloud, and founded The Aloud Charity in 2012 to further cement and develop this work.

Tim has also spoken out about mental health issues, sharing his own experiences in the BBC1 documentary series, All in the Mind, which won a BAFTA Cymru Award for Best Documentary.

Originally from New Tredegar, South Wales, he played the piano from the age of five, honing his musical talents at his local Baptist chapel and playing in the brass band at school. By the age of 14 he’d created his own choir and the next year joined the Mid-Glamorgan Youth Choir before studying music at Cardiff University, followed by a Masters degree in Performance at the Royal Welsh College.

He began his career as a baritone, working with the choruses of established companies like Opera de Lyon in France and Welsh National Opera, but it wasn’t until he worked with the National Youth Choir of Great Britain that he truly found his calling.

In August 2010, Tim was one of several new members admitted to the Gorsedd of bards at the National Eisteddfod of Wales, was awarded an Honorary Doctorate by the University of South Wales in 2017, and was made a Fellow of the College last year, celebrating his outstanding contribution to music in Wales.

Tim is also a Vice President of the homeless charity Shelter Cymru and a trustee of The Darkley Trust, working with the arts and homeless charities within Wales.

The Royal Welsh College of Music & Drama, the National Conservatoire of Wales, and part of the University of South Wales Group, operates within its international peer group of conservatoires and specialist arts colleges. It attracts young artists from around 30 countries to provide a constant flow of emerging talent into the music and theatre industries and related professions.

The Aloud Charity was established in 2012 to engage each new generation of young people across Wales with the power of choral singing and through this activity to promote self-belief and self-confidence, to encourage aspiration, to build skills and to develop a sense of community. Aloud delivers this mission through the activity of its three principal initiatives: Only Boys Aloud, the OBA Academi and Only Kids Aloud.