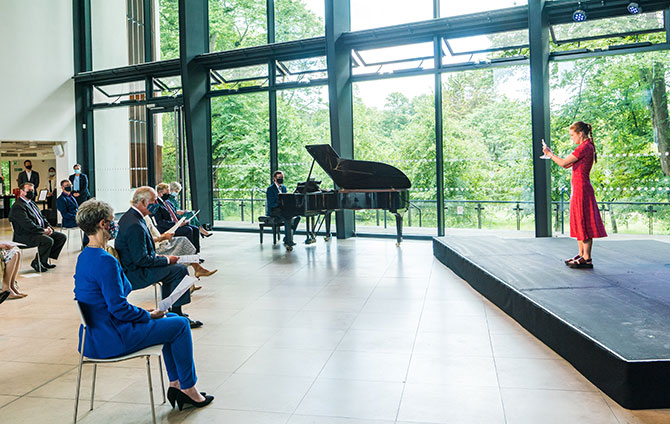 The Royal Welsh College of Music & Drama has ended its academic year with a visit from its President, HRH The Prince of Wales, and HRH The Duchess of Cornwall. Their Royal Highnesses spent the morning meeting staff, students and graduates, and learned more about how the College has managed through the pandemic and is now investing and fundraising to support the launch of exciting new programmes, including a re-designed undergraduate Music degree, a BA in Musical Theatre and a Foundation course in Scenic Construction.

In a celebration of ten years since the College opened its arts centre they also enjoyed music and drama performances showcasing the talents of the College’s exceptional young artists in the College’s Carne Foyer, the Dora Stoutzker Hall and the Richard Burton Theatre.

As part of the celebrations RWCMD graduate and Royal Harpist Alis Huws returned to the College to perform the Intermezzo from Cavalleria Rusticana and to pay tribute to the 75th birthday of Welsh National Opera and their presentation of that opera in their 1946 opening season.

Welsh National Opera is one of RWCMD’s main industry partners and, later in the visit, Their Royal Highnesses met Marianna Metsälampi and Rosie Kat who are completing MAs in Opera Directing – the only course of its kind in the UK – and who showed them around their current productions. Both young directors will have the opportunity to work on placement at WNO in future.

‘We are honoured to welcome Their Royal Highnesses to the Royal Welsh College during their week in Wales and it feels very special indeed to have our President with us as part of our final week of term,’ said RWCMD Principal Helena Gaunt. ‘Of course it’s been a challenging year for our College community but we’ve been able to continue our training throughout, and still create and programme a wide range of excellent performances in these remarkable spaces that have served us and our audiences so well over the last ten years.

We are looking forward with ambition now and it is wonderful that we have had the opportunity to brief His Royal Highness about future strategies that will ensure we emerge stronger from the experience of the last 18 months as we fundraise and invest to widen access to training, deepen connections to the industries and develop our impact.’

Their Royal Highnesses also met the current Prince of Wales scholars, actor Ayo Adegun, MA Opera student William Pearson and pianist Ieuan Davies. The Prince of Wales Scholarships were renewed on the last royal visit to celebrate HRH The Prince of Wales 70th birthday, and support exceptional young artists from across Wales and the wider UK.

Visiting the Richard Burton Theatre The Duchess of Cornwall met the members of Flying Bedroom Productions, a new company of music, composition and design students who have collaborated to create an immersive children’s theatre production The Flying Bedroom, due to perform at Theatr Clwyd in July and tour to North Wales schools in September.
The Prince of Wales, who has a longstanding interest in the arts, became the College’s President in 2019, having been its Patron for the previous 20 years.

For more on the College’s 10th anniversary celebrations see our press release here.

On arriving Their Royal Highnesses watched performances in the Carne Foyer from some of the College’s students, including a Shakespeare speech by MA actor Zoe Goriely, a performance from Something Rotten by some of the graduating MA Musical Theatre cohort, and this year’s Sir Ian Stoutzker Prize winner Elena Zamudio, performing Porgi Amor from The Marriage of Figaro, accompanied by graduate and previous Prince of Wales scholar David Doidge, now Chorus Master at WNO.

They were introduced to members of the outgoing and incoming Student Union committee including current President Nia Thomas and her successor Rebecca Mercer.

While His Royal Highness met with members of the College’s senior team, Her Royal Highness met Design for Performance students including designer Katie Unwin also displayed the reconstruction of a 1600 child’s dress, her entry for this year’s prestigious Pattern of Fashion award which celebrates period craft skills in pattern cutting and sewing.

The Prince of Wales Scholarships: Awards are offered in Drama, Opera and Music and support students as they prepare at the College to influence and lead the creative industries of the future. His Royal Highness takes a keen interest in the development of those receiving this support. Previous Prince of Wales Scholars include Toks Dada who is now Head of Classical Music at the South Bank Centre.

The Royal Welsh College of Music & Drama, the National Conservatoire of Wales, competes with an international peer group of conservatoires and specialist arts colleges for the best students globally, enabling them to enter and influence the world of music, theatre and other related professions. The College’s students have performed regularly at Llwynywermod, Buckingham Palace and at the College for HRH on many occasions.