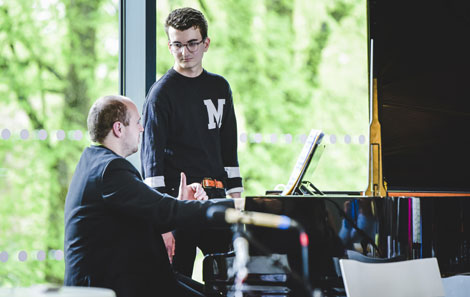 Composer Derri Lewis is the joint winner of the National Centre for Early Music (NCEM) Young Composers Competition 2019 in association with BBC Radio 3.

His winning composition will be broadcast on Radio 3 this autumn.

“Working with Christopher and Liam, and the seven other amazing young composers created an amazing sense of community, and was a brilliant learning experience,” said Derri.

His winning composition, Walls of Brass, focuses on different ways to create the illustion of multiple voices performing at once.

“It’s been so wonderful to explore new ideas in a safe environment and make new friends at the same time.”

Liam was joined on the judging panel by producer of Radio 3’s Early Music Show, Les Pratt, and Delma Tomlinson, director of NCEM.

Liam Byrne, will perform Walls of Brass in Bristol’s alternative venue, Glitch, in a concert recorded by BBC Radio 3.

The shortlisted pieces were all live-streamed and are available on the NCEM website.

Among Derri’s many achievements this year: he was among the eight composers, five from RWCMD, to win the opportunity to workshop their compositions with BBC NOW at BBC Hoddinott Hall as part of the Composition Wales project.

Derri is continuing his studies at Zurich conservatoire next term.

The main image shows Derri with graduate and pianist Conal Bembridge-Sayers, discussing his contemporary opera, Spinning Jenny, which he composed with Tayla-Leigh Payne. This was performed as part of Atmospheres, the College’s new music festival