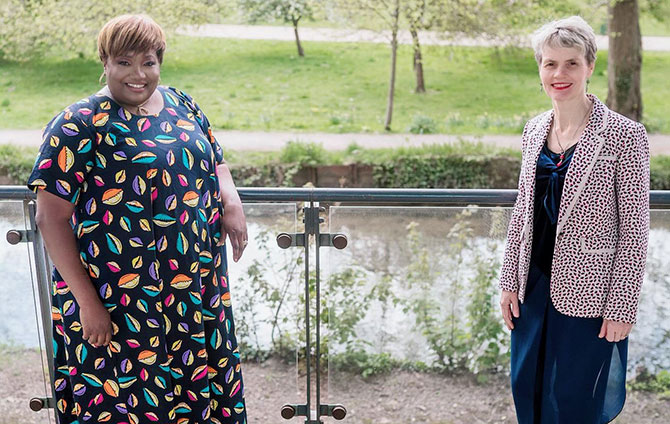 The College is very proud to announce that Professor Uzo Iwobi OBE has been appointed as a Vice President of the Royal Welsh College of Music & Drama.

Uzo is currently a Specialist Policy Adviser on Equalities to Welsh Government. Previous roles include Commissioner to the Commission for Racial Equality UK and Chief Executive Officer of Race Council Cymru.

Uzo’s contribution as Hodge International Chair of Diversity over the last three years has already been instrumental in the College’s work on its Strategic Equality Plan which launched last Autumn.

‘Since Uzo has been a part of the College her work with us has been pivotal,’ said Principal Helena Gaunt. ‘She has been so generous in becoming an active and inspirational member of the RWCMD community, connecting us to diverse communities including the Windrush Cymru Elders. Most recently she has been an expert voice helping us to develop and implement our Strategic Equality Plan and Anti-Racism Plan.

‘This new role celebrates and recognises Uzo’s contribution at the College and across the rest of the Welsh arts sector, and the vital part she will continue to play in some of the most important parts of our ongoing journey.

Uzo is a wonderful catalyst for change and an active ambassador for our institution, and I am so grateful that she will continue to bring her expertise to support us. I’m delighted that Uzo has accepted this honorary role and I look forward to continuing our close relationship.’ 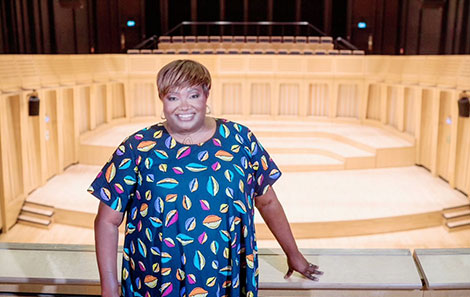 Uzo Iwobi said, ‘It is such a great honour to be invited to serve the College as a Vice President. Over the past few years as the International Chair for Diversity for the Royal Welsh College I have developed a great admiration for the valuable work being done here.

‘I was delighted to support the College as it took its vital and challenging steps to develop its own Strategic Equality Plan and its Anti-Racism Plan. The development of the Anti-Racist Plan has been recognised by Black History Wales and Windrush Cymru Elders as best practice in the sector.

In my new role I am fully committed to continuing to work with the College towards the effective implementation of both plans. These are important steps towards embedding an inclusive culture in all facets of the College’s work and it’s such a pleasure to be part of this exciting and transformational journey. I am truly honoured to serve the College in this capacity.’

Equality, Diversity and Inclusion (EDI) is one of the Strategic Equality Plan’s overarching targets, but it also complements the College’s ambitions around sustainability and governance, people and connections, and students and programmes.

Since the College launched its Strategic Equality Plan it has:

His Royal Highness The Prince of Wales became the College’s President in 2019, continuing the active support he has offered since he first became Patron in 1999.

RWCMD’s Vice Presidents are a select group of trusted advisors and ambassadors who bring valuable knowledge and expertise from a range of backgrounds to support the College’s ambitions.

Nigerian born Lawyer Uzo Iwobi was awarded an OBE for her contributions to community race relations and South Wales Communities, establishing the very first African Community Centre in the country and founding Race Council Cymru, an umbrella body challenging racial inequalities in Wales. Her many positions of leadership on race, include serving as a Commissioner for Racial Equality UK. She worked as a strategic adviser to Police National Diversity Team, Home Office and the Police Authority (APA) and has been a board member for British Red Cross, United World Atlantic College and other charities such as BAWSO.

In 2018 Uzo was appointed the Hodge International Chair of Diversity at the Royal Welsh College of Music & Drama and a coordinator for the Royal Commonwealth Society of Wales.

Uzo was named on the 100 list of Black, Brilliant and Welsh Africans by Wales Online and a Commissioner to the Centenary Commission and is currently serving as the first black African woman to be appointed a Specialist Policy Adviser on Equalities to Welsh Government.
Last year her image was beamed on to the legendary Stonehenge as one of only eight ‘Covid Champions’ in appreciation of all her immense and ongoing work for the community.

A Space for Everyone

The College’s A Space for Everyone campaign collaborated with students, staff, graduates and friends to bring together its Strategic Equality Plan, with a vision to make the College a safe and creative space for all.
Setting out the College’s main objectives for the next five years, RWCMD’s Strategic Equality Plan is backed up by an annual action plan, ensuring that progress is monitored.

All protected characteristics are included in the Strategic Equality Plan and annual Equality Action Plan.

*References to staff refer to our salaried staff